The Eurasian Research Institute of Khoca Akhmet Yassawi International Turkish-Kazakh University will host its 2nd International Congress on Economics, Finance and Energy (EFE’2016) titled ‘Political Stability and Economic Development’ on May 16-18, 2016 in Almaty, Kazakhstan (http://icefe.org). In 2016 we invite you to gather in Almaty, a former capital city of Kazakhstan, to discuss the relationship between political stability and economic development particularly in the Eurasian region countries. The theme directs our attention to exploring the cause and effect linkages between political turmoil and economic growth/ stability-led economic development in the developing countries. The Congress aims to establish a platform for scholars and experts to share their experience and knowledge on the intersection of political stability and economic development. More specifically, participants of the Congress will be focusing on: (a) the consequences of an unstable political environment for the investment climate and the pace of economic development; and, (b) the extent to which relatively poor economic performance leads to political unrest. The participants are expected to submit the abstracts of their papers (250-300 words), which include the problem statement, explanation of the hypotheses, methods used and the research results, through the Congress submission system no later than 22nd February 2016. Scholars and experts are invited to submit their papers for the EFE’2016 Congress with a focus on the following topics:

Bilig (SSCI (SocialSciencesCitation Index), SCOPUS Cambridge/ABD, etc.),
Eurasian Research Journal (the first issue will be published in January 2017).
The Congress will be held in English, Turkish, Russian, Kazakh as well as other Turkic languages. The papers and abstracts can be submitted in one of these languages. The Organizing Committee would be grateful if you could confirm the language in which you are planning to deliver your presentation beforehand (during the submission). If you have any questions please email to [email protected] The Eurasian Research Institute will cover the accommodation expenses for the presenters/ authors of the selected papers. 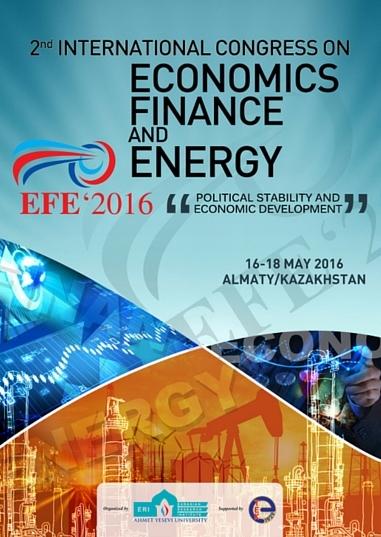