Mr.Samir Taghiyev Senior Regional Manager for the Islamic Corporation for the Development of Private Sector (ICD) for CIS&Europe countries arm of the Islamic Development Bank Group (IDBG) gave a seminar on the topic of “Islamic Finance” 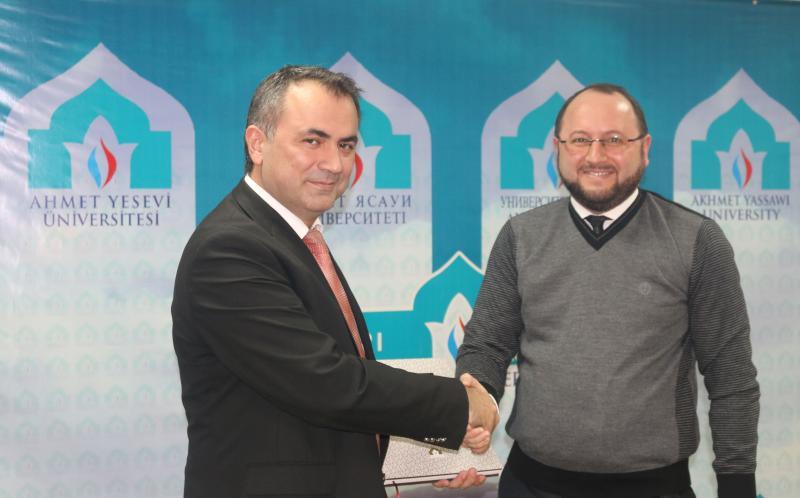 In his seminar, Mr. Taghiyev mainly gave brief information about the definition and working structure of Islamic Finance and the current legislation process regarding Islamic Finance in Kazakhstan and in CIS region in general. Mr. Taghiyev pointed out that Islamic Finance sector is growing every day and they are working to provide their attribution to the question of how Islamic Finance could play a role in developing CIS countries economies especially during this economic turbulences.

Speaker explained that, Islamic Finance is becoming one of the economic growth drivers in economies of CIS countries as an alternative to conventional financing. In his speech, Mr. Taghiyev explained that the Shariah prohibition on Riba (interest-based transactions), Gharar (contractual uncertainties / excessive risk), Maysir (zero-sum risk transferring mechanisms), Jahala (ignorance of investing parties) and the mandatory requirement of real assets to structure financial products ensured the Islamic financial institutions were free from exposures to the subprime portfolios. The emphasis of Shariah to ensure transactions arelinked to the real sector enables the occurrence of productive economic activities that generate income and wealth.

While talking about their corporation’s operations in Kazakhstan, Samir Taghiyev mentioned that the first Islamic Leasing company which ICD is also one main shareholders already disbursed $20 million worth equipment for small and medium sized enterprises. He delivered his thought on the issue of how Islamic Finance could contribute to generate business and increase the production of import substitution products in Central Asia region. He emphasized that Islamic Finance is a new concept for Kazakhstan and they are taking the necessary initiatives on passing the legislations regarding Islamic Banking in Kazakhstan.

Mr. Taghiyev stated that, in Asia, countries newly exploring Islamic finance includes Azerbaijan, Kazakhstan, Kyrgyzstan, Turkmenistan, Tajikistan and Kyrgyzstan, among others. According to Mr. Taghiyev, Manila based ADB and London based EBRD has also stepped up its efforts and involvement in the Islamic finance sector with a view of helping in the economic development of its member countries.

Islamic banking activities in Central Asia is limited although there has been significant take-up in recent years, with conventional players expressing keen interest to spin off Shariah operations or convert their business model to be in compliance with Islamic law. In Kazakhstan, Abu Dhabi’s Al Hilal Bank is its sole fully-fledged Islamic bank while Zaman Bank, in partnership with the ICD, is in the process of transforming its operations to become the country’s second Shariah financier.

At the end of the seminar, participants discussed topics related to Islamic Finance and small and medium sized enterprises.