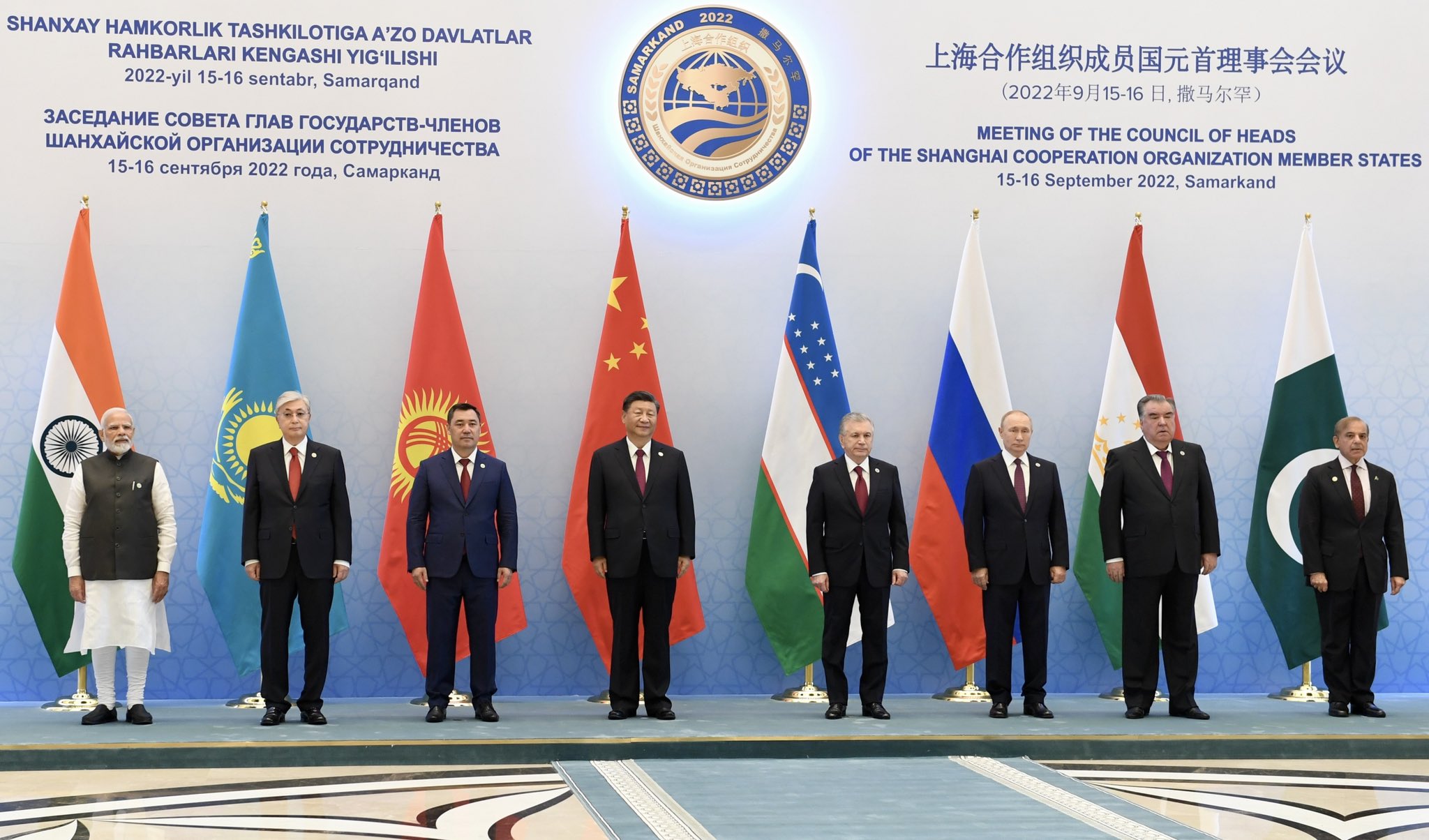 On September 15–16, 2022, the attention of politicians and the media was riveted at the annual summit of the Shanghai Cooperation Organization (SCO) in Samarkand. During the times when serious political and economic transformations are happening across the Eurasian continent, the first in-person gathering of the heads of states after the pandemic is undoubtedly an important event in the region. The number of high-level guests, the signed documents, and meetings on the sidelines of the event attest to the importance of the summit.

The 22nd annual summit of heads of state of the SCO brought together the leaders of China, India, Kazakhstan, Kyrgyzstan, Pakistan, Russia, Tajikistan, and Uzbekistan as member states; the presidents of Türkiye and Azerbaijan as dialogue partners; and the presidents of Iran, Mongolia, and Belarus as observer states. The President of Turkmenistan was invited as a special guest by the SCO Chair – the President of Uzbekistan, while the President of Armenia could not attend the summit due to the situation in Armenia.

The program of the summit started on the evening of September 15th 2022, when the heads of states attended an informal dinner at the historical and ethnographic complex in Samarkand. The leaders of China, India, and Iran missed the dinner; President Xi Jinping due to COVID-19 precautionary measures; Prime Minister Modi due to his late arrival; and Iran’s president, Ebrahim Raisi, was giving a speech at the Punjab Shiite Mosque in Samarkand. On September 16th, the official part of the summit started with the meeting of the Council of Heads of State of member states, which was followed by a meeting in an expanded format, attended by all invited leaders.

The Samarkand Declaration was signed as a result of the summit, along with over 40 documents—the largest number of adopted documents in the summit. Although some are skeptical about the summit’s outcomes, SCO vividly demonstrated its mission to provide a multilateral platform to gather Eurasian leaders. Covering 44% of the world’s population and 26.6% of the total area of the globe, SCO has an important place not only in Eurasian but in global affairs [Muratbekova, 2019]. Accordingly, the following takeaways are drawn from the outcomes of the summit.

First of all, the number of interested countries demonstrates that an interest in SCO has grown exponentially. In particular, the Samarkand summit recorded Iran as a new member, launched the procedure for the accession of Belarus, granted the status of SCO dialogue partners to Bahrain, the Maldives, Kuwait, and the UAE, and agreed to include Egypt, Saudi Arabia, and Qatar as new dialogue partners. Founded in 2001 on the roots of the Shanghai Five, the SCO only in 2017 admitted two new members: India and Pakistan. In 2021, the SCO member states agreed to launch the procedure for Iran to apply for full membership, which resulted in the signing of the Memorandum of Obligations by Iranian President Ebrahim Raisi during the present summit. Once Iran has fulfilled its obligations according to SCO’s rules, it will submit its application to the SCO Secretariat in Beijing for approval. The Belarus President’s appeal to join SCO was unilaterally approved by member states in Samarkand, which will be launched next year [Belta, 2022]. The President of Türkiye also announced his intention to apply for full membership during the next summit in India [Reuters, 2022].

Second, the expansion of SCO members around Central Asia witnesses Central Asia as a geographical core of SCO. Samarkand summit once again demonstrates the importance of Central Asia in geopolitical games of regional powers such as Russia, China, India and Türkiye. For Central Asian states, SCO provides a platform to jigsaw their interests, especially in times of difficult political conjuncture. Regional powers meanwhile use Central Asia as a connecting point that downshifts the contradictory politics of other member states. To this point, SCO has all chances to become a platform for Eurasian leaders’ alternative to global G7 and G20 meetings. Intention for membership of Iran, Türkiye and Belarus is another evidence of that.

If previously it was clear that China and Russia had divided economic and political spheres respectively within SCO, with the ongoing expansion, it is vague how SCO will move further. In these circumstances, Central Asia has to be more active in promoting its geopolitical importance in linking Eurasian politics.

Third, the provided platform allowed leaders to discuss ongoing important issues bilaterally, trilaterally, and multilaterally. For instance, during his first visit abroad after the pandemic, Chinese President Xi Jinping managed to have bilateral discussions with the leaders of ten countries attending the summit, as well as trilateral discussions with Russia and Mongolia [FMPRC, 2022]. Not diminishing the importance of other bilateral meetings, particular attention was given to the first face-to-face meeting between President Xi and President Putin after Russia’s invasion of Ukraine. However, as Putin confessed after the summit, there weren’t any important outputs from the talks, but Russia “highly appreciates the balanced position on the Ukrainian crisis” and “understands concerns” of China over the Ukrainian crisis [Kremlin, 2022; Standish, 2022]. Similarly, the personal meeting between President Putin and the Indian Prime Minister led to the Prime Minister’s noting India’s concerns over the Ukrainian conflict and calling for a diplomatic approach [Haidar, 2022]. Turkish President Recep Tayyip Erdoğan, meanwhile, once again suggested organizing a meeting with Ukrainian President Volodymyr Zelensky. After the meeting with President Putin, President Erdoğan shared his impression that Putin is willing to end the war as soon as possible, while his intention to face President Putin and Zelensky is based on his firm belief that the conflict must be solved at the negotiating table. Being a NATO member and opposing Western sanctions on Russia, President Erdoğan tries to mediate the end of the conflict [Kirby, 2022]. Beyond the talks around the Ukrainian issue, SCO members discussed more practical issues and agreed on numerous topics.

Fourth, the SCO summit was focused on economic cooperation and connectivity. Again, given the ongoing friction between the collective West and Russia, SCO member states, and especially Central Asian leaders, aim to optimize their transportation routes. President Tokayev during his speech emphasized the importance of developing transportation routes between Central and South Asia, along with the North-South and East-West trans-Eurasian corridors, while the importance of China-Kyrgyzstan-Uzbekistan Railway Corridor was stressed by all three leaders where the corridor will be built. President Tokayev urged the completion of the Kazakhstan-Turkmenistan-Iran corridor during a meeting with Iranian President Raisi, while Iranian President Raisi also supports the development of the China-Central Asia-Western Asia-Mediterranean corridor. Prime Minister Modi urged the acceleration of the Chabahar port project and the International North-South Transport Corridor (INSTC) [Niyazbakieva, 2022]. Of course, leaders emphasized China’s Belt and Road Initiative in regard to connectivity.

Besides, all participating states called for the expansion of the capacity of economic cooperation, trade, and investment. SCO leaders believe in deepening the economic capacity of member states, and the current summit proved the gradual shift towards the transformation of SCO into an economic platform. To this end, SCO leaders mentioned the creation of the Greater Eurasian Partnership together with SCO, EAEU, and ASEAN, along with other interesting groupings. The sides also signed a Concept for Cooperation in Developing Connectivity and Creating Efficient Economic and Transport Corridors, along with a decision to create a Special Working Group on Startups and Innovation; a Special Working Group on Poverty Reduction; and a Special Working Group on Traditional Medicine. The Samarkand Declaration stressed that SCO member states agree on further improvement of the global economic governance architecture and are committed to promoting an open and transparent trade system, opposing protectionist actions and the unilateral application of economic sanctions [MEA, 2022]. In addition, Joint Statements on Climate Change, Food Security, Energy Security, and the Statement on Maintaining Reliable International Supply Chains were adopted at the summit [MOFA, 2022].

Fifth, despite the ongoing military escalation between Russia and Ukraine, recent border tensions between Azerbaijan and Armenia and emerging border clashes between Kyrgyzstan and Tajikistan amid the summit, the Afghanistan issue was discussed much more than the mentioned conflicts. Even the negotiations between the leaders of Kyrgyzstan and Tajikistan were announced at the very last moment, whereas the summit sessions did not discuss the Central Asian chronic border clash as a regional security issue in comparison to the problem of Afghanistan. Afghanistan, by the way, was mentioned in connection to regional security by almost all leaders, with Uzbek President Shavkat Mirziyoyev proposing to establish a special fund for the humanitarian support of Afghanistan [Niyazbakieva, 2022]. In line with security concerns, SCO leaders adopted the Comprehensive Action Plan for 2023–2027 on the implementation of the provisions of the Treaty on Long-Term Good Neighborliness, Friendship and Cooperation.

In conclusion, the Samarkand summit proved the transformation of SCO toward becoming a more ceremonial organization that brings to one table Eurasian leaders together. With the absence of certain collective results on regional issues, including the ongoing conflicts in the region, it could be stated that SCO is shifting towards economic cooperation rather than promoting its initial regional security agenda. For Central Asian states, being in the geographical core of SCO while squeezed between sanctioned Russia and assertive China, a growing interest in SCO could lead to positive outcomes. Transportation and infrastructure projects might be one such field that gains from current changes. Fundamental transformations in Eurasian politics demonstrate that Central Asian states have to diversify their strategy, including reassessing the potential of SCO.

Belta (2022). Belarus received unanimous support from the SCO countries in its aspiration to become a member of the organization. Retrieved from https://www.belta.by/president/view/belarus-poluchila-edinoglasnuju-podderzhku-ot-stran-shos-v-stremlenii-stat-chlenom-organizatsii-524051-2022/. Accessed on 20.09.2022.

Haidar, Suhasini (2022). PM Modi tells Vladimir Putin ‘now is not an era of war’. Retrieved from https://www.thehindu.com/news/national/pm-modi-holds-talks-with-russian-president-vladimir-putin-on-sidelines-of-samarkand-sco-summit/article65899314.ece. Accessed on 20.09.2022.

MEA (2022). Samarkand Declaration of the Council of Heads of State of Shanghai Cooperation Organization. Retrieved from https://www.mea.gov.in/bilateral-documents.htm?dtl/35724/Samarkand+Declaration+of+the+Council+of+Heads+of+State+of+Shanghai+Cooperation+Organization. Accessed on 20.09.2022.

MOFA (2022). Meeting of the Council of Heads of State of Shanghai Cooperation Organization, Samarkand, 15-16 September 2022. Retrieved from https://mofa.gov.pk/meeting-of-the-council-of-heads-of-state-of-shanghai-cooperation-organization-samarkand-15-16-september-2022/. Accessed on 20.09.2022.

Standish, Reid (2022). “The balance of power has changed.” Meeting between Putin and Xi Jinping: what will happen to the “limitless” partnership. Retrieved from https://rus.azattyq.org/a/what-we-know-about-the-russia-china-partnership/32036807.html. Accessed on 20.09.2022.