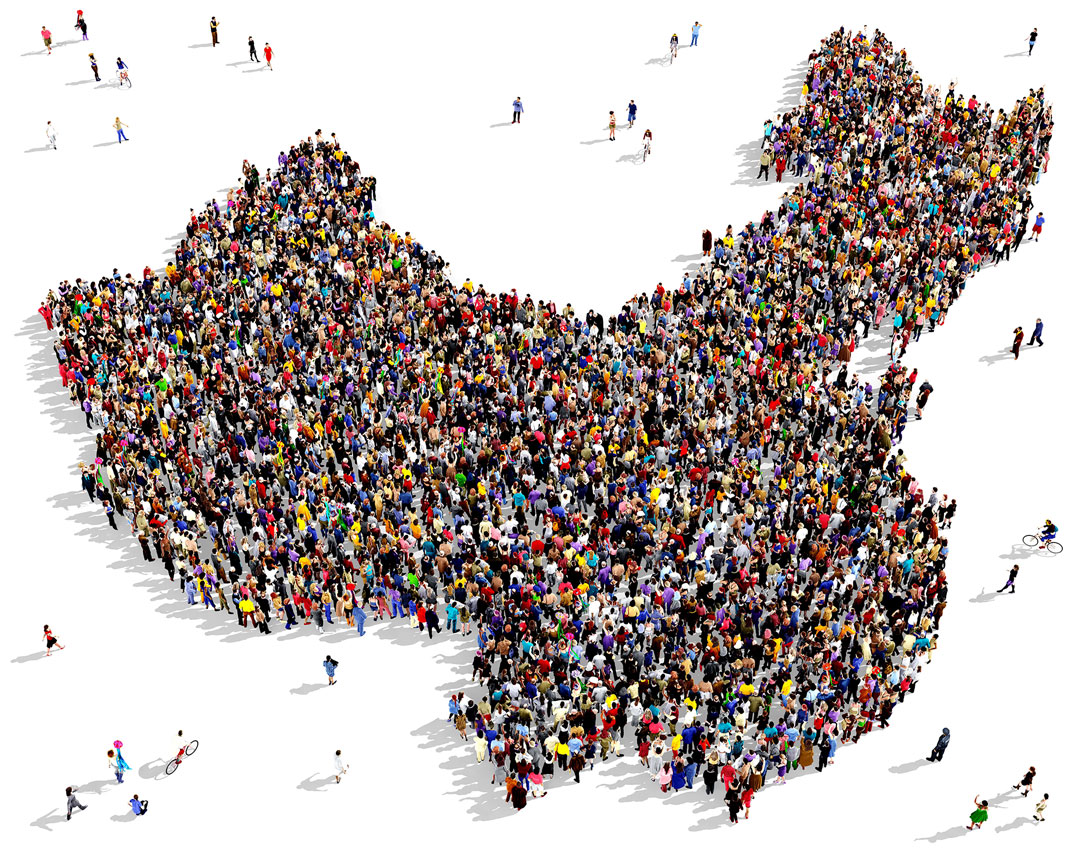 On May 31, 2021, the Political Bureau of the Communist Party of China announced a new policy that allows couples to have up to three children instead of the previous two-child limit. Although the introduced measures aim to stimulate the birth rate to obtain a long-term term balance of population growth, the reaction among the population is rather controversial. The high costs of raising children, inequalities at home and workplace, along with the high expectations of families already demonstrated the inefficiency of the previous easing birth policy.

The decades of family planning limitations turn out to have the most mixed social policy in China. The family containment policy began after rapid population growth between the 1950s and 1970s, when the total fertility rate reached more than six births per woman during its peak in the 1960s. Deng Xiaoping believed that population growth should not outpace economic growth, therefore revised Chairman Mao’s principle of “more people, more power” and introduced new family planning rules in 1979. Along with the launch of liberal reforms, he considered birth control policies as a method of achieving an increase in GDP per capita [Zhang, 2017]. As a result, from 1980, the ‘one-child policy’ was introduced for urban workers. Rural citizens, along with ethnic minorities were allowed to have a second child, whereas the urban residents if the first child was a girl also could apply for permission for a second child. However, despite the strict rules that have to apply only for urban residents, birth control was widespread with heavy fines, often forced abortion and unofficial penalties. Losing a job was a common threat, some areas practiced sterilization of women with a maximum number of children. The major challenge with the second child was to include in the national household system hukou, without which it is impossible to have access to social services such as education and healthcare [East Asia Forum, 2021]. As a result, the total control of birth has been recognized as a necessary policy to maintain the country’s social well-being and largely accepted by the population. 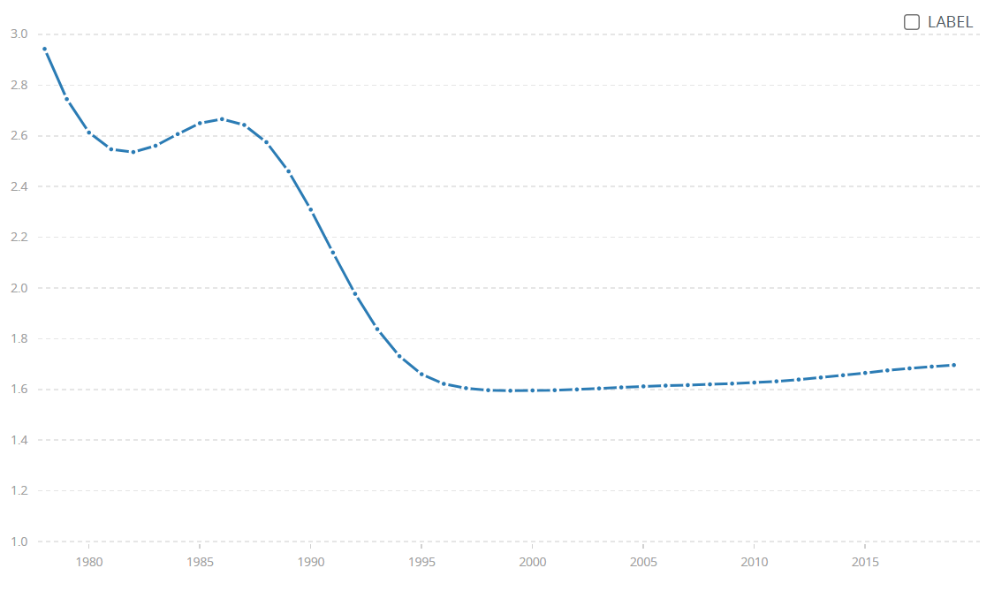 Only in 2013, the Chinese government eased the policy, allowing to have a second child for those couples where both parents are the only child. In 2016, the ‘one-child policy’ was replaced by allowing the second child to balance the long-term demographic implications of the country. Yet, the new rules had only a short-time effect and largely failed according to the statistics. In particular, after two years of slight growth, the birth rate declined to the lowest indicators. For instance, for 2018, the National Health and Family Planning Commission projected birth growth between 20-22 million births, yet the actual birth was only 15.23 million. Similarly, according to the Seventh National Population Census, in 2020, only 12 million kids were born – the lowest indicator since a famine in the 1960s [National Bureau of Statistics of China, 2021]. China’s total fertility rate dropped to 1.3 children per woman, which is far below an average of 2.1 essential for a stable population [East Asia Forum, 2021]. 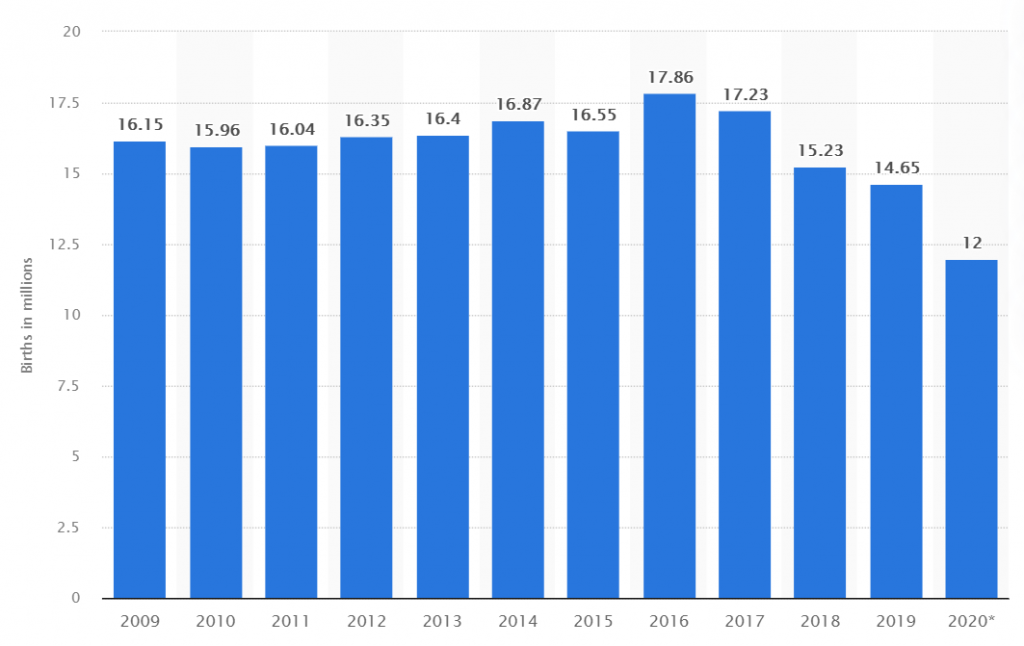 The Chinese government is interested in improving the demographic landscape of the country. However, there are discussions on whether the new policy will solve the demographic situation. Harsh maternity leave policies, high costs for education and extracurricular activities, along with high costs for childcare, housing and living raise doubts about the possibility of having more children. Although the new policy promised to provide more supportive measures, including baby bonuses, tax credits and better childcare support, it seems that it is not enough to convince people to have more children. On the other hand, the government promotes traditional couples omitting the rights of single women, banning their right to receive treatment with assisted reproductive technology, including IVF and egg freezing due to medical risks and ethical concerns [Li, 2021].

Nevertheless, the collective responsibility for birth control written in the Constitution in 1982 has a tremendous influence on the macro-economic development of the country and family perceptions. Population ageing and a shrinking workforce is a major burden on the younger generations with deep consequences on the economy. In 2020, 18,7% of the population were at the age above 60, with a projection to rise to 34.6% by 2050, which would have huge strains for the pension system of China [Statista, 2021b]. In addition, given the present family structure of “4-2-1” with four grandparents and two parents for only one child, more pressure to assist all family members, including their retirement, and healthcare is falling on the shoulders of the younger generation.

Gender imbalance is another concern of the country. Due to the chance of having only one child, families preferred to have a male child, which subsequently led to widespread cases of abandoned girls, sex-selective abortions, and female infanticide. As a result, the sex ratio for 2020 is 105.07, with 30 million more men than women, which could create societal issues.

It could be said that the latest relaxation on the birth policy has been introduced due to the fact that China had already entered its critical turning point by registering its slowest growth since the first census in 1953. The national population grew to only 5,38% during the last decade (2010-2020) [National Bureau of Statistics of China, 2021]. Although the National Health and Family Planning Commission expects China’s population to peak by 2027, so far this forecast has not lived up to expectations. The new policy to support the third child is likely to gradually affect the demographic situation, but without real measures to support and encourage family expansion, it will be difficult to change the established life of Chinese families. For the stimulation of birth, the provision of social security bonuses is the most effective solution, which has a long-term impact on the economic growth of the country.