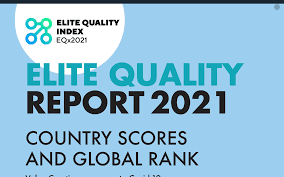 In all of the countries of the world, there is a relatively thin layer of the population that has more influence on the country’s fate in contrast to others. This group provides coordination capacity for the economic resources of a nation and directly influences a country’s present and future. These people are called “elites,” and they are a mathematical inevitability, according to Casas and Cozzi (2020). The term “elites” includes not only the financial ones but also political and knowledge elites. Furthermore, as elites have a colossal impact on any country’s future, studying them and their “quality” is significant for any society.

The Elite Quality report of 2020 was the first project that studied elites and their impact. The index was presented as a pilot project. Nevertheless, it has drawn global attention and appreciation from prominent parties. For instance, the former chief economist of the World Bank, Kaushik Basu, said that the report “can potentially play a role in helping nations reform their leadership, thereby contributing to overall social welfare” [Casas & Cozzi, 2021]. Thus, the efforts were continued, and the report of 2021 was already positioned as fully-fledged research; coverage expanded from 32 countries to 151 and from 72 indicators to 107. The addition of more than a hundred new countries into the index enables a more thorough and complex comparative analysis. While the previous paper [Nadirova, 2020] concentrated on analyzing the data in Kazakhstan alone, the current one evaluates and compares the rankings of other nations within the Central Asian region. The data for Kazakhstan has remained relatively unchanged since the previous review.

Overall, the range distribution of Central Asian countries is quite broad; they are spread across three major categories of countries: Quality Elites, Middle-Quality Elites, and Lagging Elites, from the 46th rank in the general list to 140th rank. Kazakhstan holds the highest position within the region’s countries in the general ranking, falling into the Quality Elites category. Uzbekistan comes 82nd, and its elites are categorized as Middle-Quality Elites; this group also includes Kyrgyz Republic, coming 121st in the overall ranking. Finally, Turkmenistan and Tajikistan finished together. The former had a slight advantage and was ranked 139th in the index; this puts them both in the Lagging Elites category.

Uzbekistan’s strongest side is Political Value; the republic would have been placed 22 positions higher – 60th in the index if it had been judged only by this criterion. Moreover, within this criterion alone, Uzbekistan outscores all of its regional neighbors. That should be interpreted in the following way – the elites of Uzbekistan create more political value than the elites of the neighboring republics. Going deeper into details means that Uzbekistan has a better situation with such indicators as Death rates from substance use disorders and Suicide rate compared to Kazakhstan, for instance. Furthermore, the research authors believe that Uzbekistan managed the COVID issues better than the regional leader, losing fewer school days and having lower age-adjusted mortality. At the same time, the country’s most problematic pillar is Economic Value; judging only by this criterion, the country would be placed 109th in the general list and third in the region, behind Kazakhstan and Turkmenistan. The main issues in the category include governmental economic policies. According to the authors of the index, despite the ongoing economic reforms aimed at opening up the Uzbek economy, the country still scores very low in Trade Freedom, Economic Globalization, Protectionism, and Government Interventions. Further efforts to lower the government presence and open the economy may be necessary for the republic to restart its economy after the sharp decline from 2015 maximum [The World Bank, n.d.].

Kyrgyz Republic’s strength within the index is unique for the region. For instance, Kyrgyzstan is ranked 96 out of 151 countries in terms of Economic Power, below Kazakhstan and Uzbekistan, but above Tajikistan and Turkmenistan. It means that the country’s elites are relatively less dominant in terms of economic power and have more control than those of Tajikistan and Turkmenistan. Moreover, the situation for Kyrgyzstan is better than in Kazakhstan and Uzbekistan in terms of Coalition Dominance. This section includes such factors as the dominance of top industries of a country in its economy, academic freedom, military expenses, economic complexity, etc. According to the index authors, Kyrgyzstan outperforms all of its regional neighbors in terms of military spending optimization and academic freedom and excels in terms of economic complexity, being second only to Kazakhstan. The pillar with which Kyrgyz Republic struggles the most is the Political Value pillar; namely, it is believed that the corporate tax rate in the country is far from optimal, the death rate from substance use is one of the highest in the entire index, levels of cyber security are low, and there is an overreliance on one exporting sector. The republic’s economy is over reliant on gold exports; according to statistical data for 2019, Kyrgyzstan exported 1.63 billion dollars’ worth of gold in 2019, making the republic the 37th largest exporter of gold in the world [The Observatory of Economic Complexity, 2019].

Unfortunately, Turkmenistan is still one of the most closed economies globally, providing very little information to the outside world; that could have influenced the country’s ranking. Due to the lack of information, it is difficult to pinpoint one particular pillar in which Turkmenistan excels; however, the main issues of the republic are easily noticeable within the index. Turkmenistan ranks 151 out of 151 countries in the list in terms of the political power of its elites – the country has one of the lowest possible scores for the freedom of the press, corruption control, political globalization, property rights, and citizens’ e-participation index. While the country can keep some of its economic scores, such as debt to GDP ratio, relatively high, the lack of openness, transparency, and freedom undermine many of the government’s economic efforts. For instance, Turkmenistan has the worst score in the region in terms of Dutch disease propensity, implying that the country’s economic model is volatile and over reliant on one leading sector of export – petroleum gas.

Tajikistan scored the lowest out of all Central Asian countries in 2021. However, not all of the measured sectors considering the country are similarly low placed. While in terms of Economic Power, Economic Value, and Political Power, the country is placed 149th, 135th, and 107th in the global ranking, the Political Value pillar puts the country in 77th place globally. This means that despite the overconcentration of political and economic power, the local elites are still able and willing to produce social value. For instance, the country has a very low number of suicides and battle-related deaths. The country also scored high in terms of age-adjusted mortality and growth differential due to the COVID-19 pandemic, demonstrating that some of the social policies of the republic are working effectively. Nevertheless, the economic policies of the government have limited success so far. Currently, the country cannot create attractive and sustainable jobs for its citizens, which directly affects both social and economic situations in Tajikistan.

Thus, it can be stated that the elites of Central Asia differ from each other in some parameters to a large extent, in others they are quite close. They have something to share with each other from successful patterns where they could increase their cooperation efforts on working towards the low scored matters by sharing their experiences with each other.

The Observatory of Economic Complexity (2019). Kyrgyzstan. Retrieved from https://oec.world/en/profile/country/kgz. Accessed on 13.09.2021.

The World Bank (n.d.). GDP per capita (current US$) – Uzbekistan. Retrieved from https://data.worldbank.org/indicator/NY.GDP.PCAP.CD?locations=UZ. Accessed on 13.09.2021.