Evaluation of the Resettlement Process: Turkey-EU Agreement and 20 July 2015 Scheme 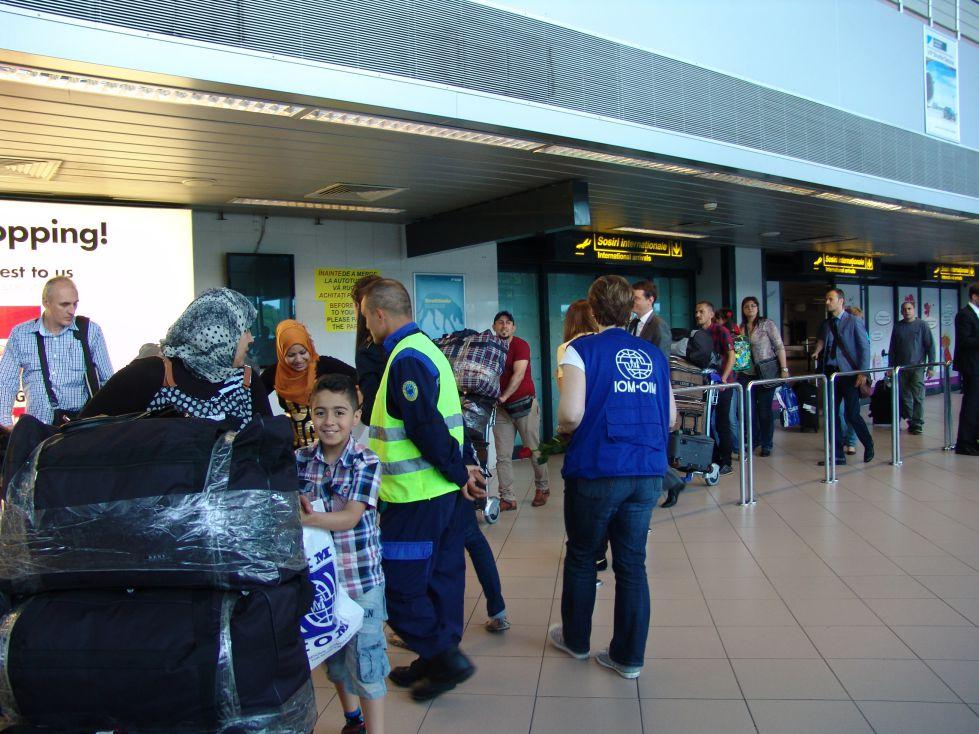 The civil war in Syria has created one of the largest migration influxes since WWII where 11 million Syrians left their homes in order to escape from the conflict between the regime and opposition forces. During the last six years, 6.6 million Syrians have settled in different parts of Syria, while 4.95 million have migrated to the neighboring countries, such as Turkey, Lebanon, Jordan, Egypt, and Iraq. Moreover, around 1 million Syrians tried to reach the European countries through legal or illegal ways. By accepting 2,910,281 people Turkey hosts more than half of the Syrians who seek refuge abroad while Lebanon hosts 1,011,366 people, Jordan – 656,170, Iraq – 233,224 and Egypt – 177,519 people in 2016 (UNHCR, 2017).

In order to regulate the uncontrolled migration influx to Europe, in March 2016 Turkey and the EU signed the Turkey-EU Refugee agreement aimed to create a legal mechanism for accepting the refugees who are in need of international protection and reduce the number of arrivals via the Turkey-Greece route. According to the agreement, the EU declared that they could accept up to 72,000 Syrians from Turkey in 2016 (Kutlugun, 2017). However, during 4 April 2016-27 February 2017 only 3,565 refugees have been resettled in the EU under the Turkey-EU deal (European Commission, 2017). Looking at the first year performance of the resettlement process it could be said that the result is not a surprise since under the 20 July 2015 scheme the EU member states have agreed to accept 22,504 people until July 2017 but so far resettled 14,422 refugees including 3,565 people covered by the Turkey-EU agreement (EU Commission, 2017). In its first year under the 20 July 2015 pledges the EU has accepted 6,790 persons including 511 under the Turkey-EU agreement, therefore, expecting a number of resettled refugees close to 72,000 in one year under the Turkey-EU agreement would have been unrealistic (European Commission, 2016).

With regard to the second aim of the agreement, Turkey has shown tremendous effort, and in its first year the Turkey-EU Refugee agreement has managed to reduce the number of daily arrivals by 98% from 1,700 people in January 2016 to 45 in January 2017 (UNCHR, 2017). Tightened control played a major role in deterring migrants using the Eastern Mediterranean route. In 2015 856,723 people used the Eastern Mediterranean route to reach Europe whereas with the implementation of the agreement this number dropped to 21,431 people between April 2016-February 2017 meaning Turkey’s efforts on tightening the controls over its shores has managed to reduce the number of arrivals by 40 times (UNCHR, 2017). These results show that Turkey has successfully managed to curb the migration flow from Eastern Mediterranean and also contributed to lowering the death rates since the number of dead refugees or those missing in sea has decreased by 80% (UNCHR, 2017).

According to the 20 July 2015 agreement, the EU member states have pledged to resettle on a voluntary basis 22,504 people who are in need of international protection in the Middle East, the North of Africa and the Horn of Africa under both multilateral and national schemes (EU Commission, 2017). The EU Commission planned the scheme for 2 years, which will be over in July this year. According to the plan, every month 938 people were supposed to be resettled in one of the EU member states, however, the monthly resettlement number now stands at 721 per month falling short by 217 people (Bartolomeo, 2016). It appears that at its current rate the total resettlement number could reach 22,504 at the end of 2017 rather than in July 2017 as planned (EU Commission, 2017).

Comparing the first (July 2015-July 2016) and second-year (July 2016-February 2017) performances it could be concluded that a number of resettled people almost doubled reaching 954 people per month between July 2016-February 2017 whereas it was 523 person per month in its first year (July 2015-July 2016). In the first year, 6,790 people were resettled in the EU member states, whereas during the last eight months 7,632 persons have been resettled (EU Commission, 2017). The resettlement number has only exceeded the required level of 938 people per month in order to achieve the goal of resettling 22,504 people by July 2017 in the scheme’s second-year period. One of the major factors that has boosted the number of resettlements is the contribution of the Turkey-EU 1:1 agreement. In the last 10 months since the first arrivals on 4 April 2016, 356 refugees have been resettled among the EU member states per month meaning that the refugee exchange agreement has increased the number of accepted refugees by 37.4% per month (EU Commission, 2017).

One of the major factors that slowed down the resettlement process is the anti-migrant stance of certain EU member states in defiance of their 20 July 2015 promises. For instance, the countries such as Bulgaria, Cyprus, Greece, Croatia, Malta, Poland, Romania, Slovakia and Slovenia pledged to accept a total of 1,737 refugees under the resettlement process but have not accepted any migrants to date (EU Commission, 2017). In addition to that, there are a number of countries that are behind their schedules and have not reported their numbers for at least several months, such as the Czech Republic, Denmark and Portugal that pledged to resettle 1,412 people but have so far only accepted 545 migrants (EU Commission, 2017). The lack of cooperation from some EU member states caused by their anti-migrant stance also negatively affects the Turkey-EU agreement.

Another factor is the varying numbers of refugees that the EU countries pledged to accept. For example, Iceland reached its pledge number in June 2016 by accepting 50 migrants, whereas Norway’s fulfillment level was at 84% in February 2017 although 2,924 migrants have already resettled in the country that is 59 times higher than in Iceland. Based on its pledge number, Norway is expected to accept 576 migrants more in order to fulfill its commitment under the 20 July 2015 scheme (EU Commission, 2017).

The major disagreement on the 20 July 2015 scheme is related to the calculation index of the pledge numbers. The EU Commission created a mechanism in order to distribute refugees between the member states in accordance with the national capabilities. Therefore, different weights have been set for different conditions when identifying the pledge numbers. Within the index, the size of the population has a weight of 40%, economic growth – 40%, unemployment – 10%, and previous engagement with asylum seekers weighs 10%. Under this index, the countries with higher economic growth and larger populations are supposed to accept larger numbers of refugees (Robert et.al, 2016).

In addition to disagreements, security related reasons have stalled the resettlement process of asylum seekers. Due to long bureaucratic procedures regarding the security background controls, even if the member states are willing to accept refugees, certain internal mechanisms slow down the process. Therefore, the EU Commission has advised the member states to apply security background controls if they deem necessary (EUR-lex, 2016).

Based on this information, it could be concluded that the EU has faced an internal cooperation problem that slows down its operation capabilities. The Turkey-EU agreement was sought as a contribution to the 20 July 2015 agreement, and 3,565 refugees were resettled from 4 April 2016 to February 27, 2017 in 13 member states (Belgium, Germany, Estonia, France, Italy, Latvia, Lithuania, Luxembourg, the Netherlands, Portugal, Spain, Finland and Sweden). In return, 1,487 people were returned to Turkey, including 159 Syrians whose asylum applications had been rejected (EU Commission, 2017).

However, the agreement occasionally becomes the target of political arguments and increases the tension between Turkey and the EU, especially in the case of Schengen zone visa-free travel for Turkish citizens. According to the agreement, Turkey should be able to join the Schengen zone after completing the 72 relevant regulations. However, the Schengen process has been put on hold since June 2016 after the EU demanded a reform of Turkish anti-terror laws which was not acceptable to Turkey (Yuzbasioglu & Cogalan, 2017).

Moreover, incidents such as blocking the rallies in the Netherlands and other EU states and preventing Turkish Minister of Foreign Affairs Mevlut Cavusoglu from meeting with Turks living in the Netherlands have quickly escalated the tension between Turkey and the EU. On March 15, 2017, Cavusoglu stated that the agreement consisted of immigration, readmission and Schengen zone visa-free entry provisions and that Turkey complied with every provision of the agreement. At the same time, he added, the EU did not fulfill its agreement obligations and continued to stall the implementation of the visa waiver for Turkish citizens. Therefore, according to Cavusoglu, if the EU did not accept Turkey into the Schengen zone soon, Turkey could unilaterally cancel the Turkey-EU agreement (Rferl.org, 2017).

In conclusion, in its first year, the Turkey-EU agreement has successfully stopped the migration flow through the Turkey route and decreased the number of deaths and missing in the sea among refugees. However, due to different factors the process of resettlement operated slowly than expected since the number of resettled people under the agreement has barely reached 5% of the limit for 2016 and 0.3% of total migrants covered by the Turkey-EU agreement. The cancellation of the only operational solution for the regulation of the uncontrolled migration flow will erase all efforts and achievements to date. As a result, the number of arrivals to Europe through Turkey will sharply increase and, consequently, the number of dead or missing refugees will rise again. Therefore, both sides of the agreement need to take into consideration potential negative consequences of canceling the agreement and try to find a way to end the current political crisis between Turkey and the EU.

EUR-Lex (2016). Eighth report on relocation and resettlement. Communication from the Commission to the European Parliament, the European Council and the Council.