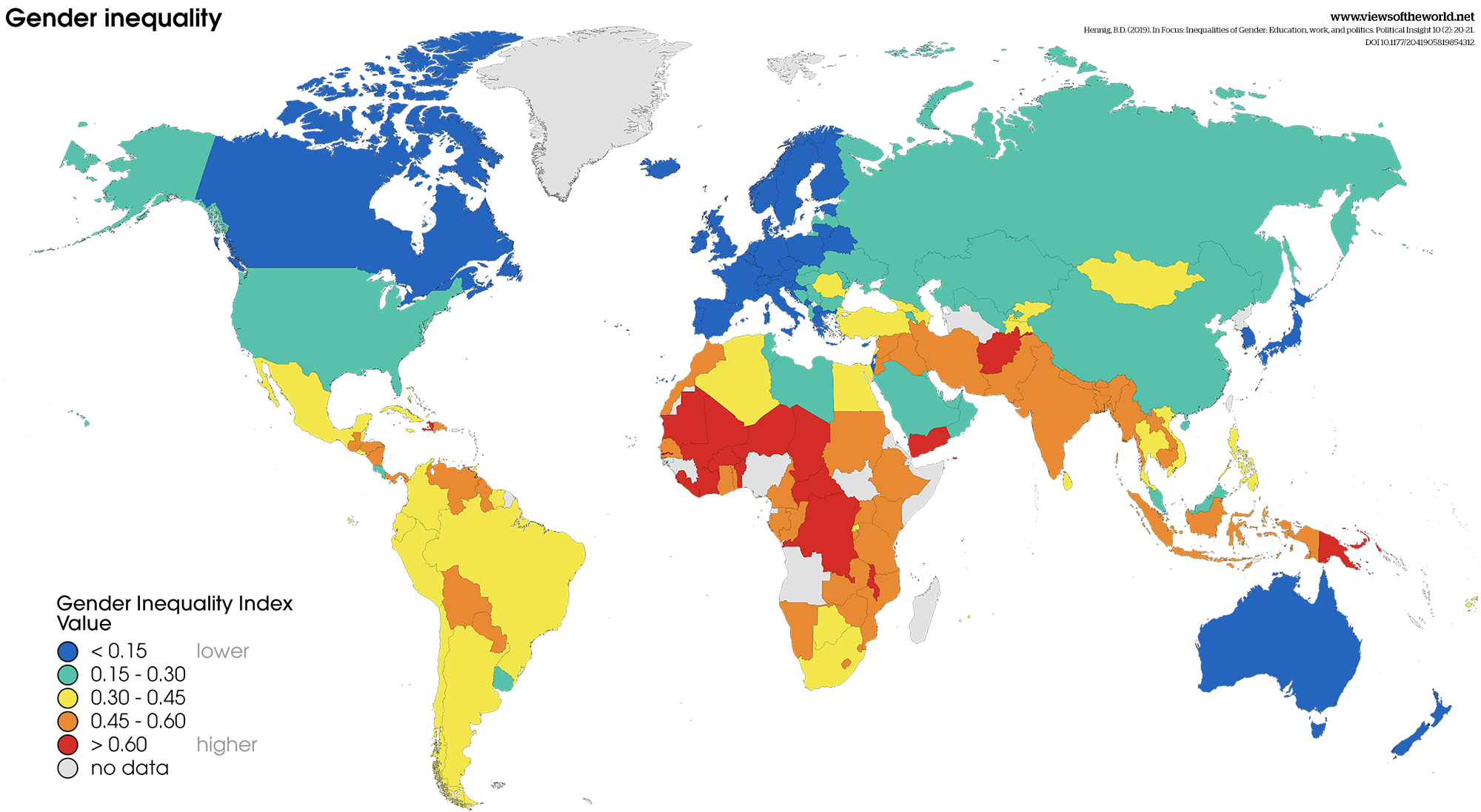 We are used to thinking of the modern world as an increasingly democratic, tolerant, and liberal space. Yet this is not always the case as it is demonstrated by some studies, such as the Global Democracy Index. One of the issues still prevalent in the world is a gender equality issue. Globally, women account for only 38% of human capital wealth versus 62% for men. In economic terms, human capital wealth could increase by 21.7% globally, and total wealth by 14.0% with gender equality at least in earnings [Wodon and de la Briere, 2018]. Thus, it means that the persistence of gender inequality leads to economic losses for all of humanity.

One of the tools widely used for evaluating gender issue is the Gender Inequality Index (GII), which measures gender inequalities in three important aspects of human development — reproductive health, measured by maternal mortality ratio and adolescent birth rates; empowerment, measured by the proportion of parliamentary seats occupied by females and proportion of adult females and males aged 25 years and older with at least secondary education; and economic status, expressed as labour market participation and measured by labour force participation rate of female and male populations aged 15 years and older. The GII-2020 is built on the same foundation as the Human Development Index (HDI) but aims to better capture the differences in the distribution of achievement between women and men. It measures the human development costs associated with gender inequality [UNDP, n.d.].

The situation for the Central Asia region is characterized by the fact that Kazakhstan is the leader in the ranking in terms of gender equality, being placed 44th out of 162 in the global ranking. This also makes Kazakhstan the only country of the region placed in the first category of the list – “very high human development”. The closest pursuer is Uzbekistan, placed 62nd worldwide. The next in the list is Tajikistan, occupying the 70th place in the ranking. Kyrgyzstan is 82nd globally in terms of gender equality. Unfortunately, GII doesn’t possess sufficient data about Turkmenistan, thus excluding it from the list.

If we look closely at the relatively high position of Kazakhstan in the ranking, we can distinguish three criteria that raise the country’s status above the average in the region of Europe and Central Asia, and two criteria that lower this status. Three positive criteria are maternal mortality rate (deaths per 100.000 live births), percentage of the population with at least some secondary education, and labour force participation rate. The maternal mortality rate in Kazakhstan according to the index is 10 per 100.000, which is twice as low as the regional average and is comparable to the most developed countries of the world. The percentage of the population with at least some secondary education in Kazakhstan is one of the highest in the world, exceeding 99% for both genders. However, it should be highlighted that the rating does not assess the quality of education at all, and Kazakhstan does not score particularly high in terms of knowledge of local pupils. On average, in terms of knowledge, 15-year-old pupils from Kazakhstan fall behind their peers from OECD countries by 1.5-2 years [Nurbaev, 2020]. Therefore, it is necessary to understand that the educational successes of the republic within GII do not necessarily lead to further improvements in the career building and life-improving perspectives of the population. Finally, the labour participation rate for both genders is quite high in the republic – 62.7% for women, 75.5% for men, while geographical region averages are 45% and 70% for females and males, respectively. It is also important to note that the gap between gender employment in Kazakhstan is quite small compared to the regional one.

Referring to two criteria that depress Kazakhstan’s position in the rating, these are adolescent birth rate (births per 1000 women aged 15–19) and women’s representation in parliament. The adolescent birth rate in Kazakhstan is 29.8 per 1000, which exceeds the average for the region of Europe and Central Asia by 2. Adolescent birth, in addition to identified health risks, can lead to poor socioeconomic outcomes such as incomplete education, harm to maternal and child health, intergenerational transmission of poverty, etc. According to various experts, to reduce teenage pregnancy, policymakers should employ strategies to empower adolescent girls, and governments should improve access to health care and information for poor and marginalized groups, who are most likely to give birth at an early age. [McQueston et al., 2012]. As for the share of seats in parliament, women in Kazakhstan after the elections in 2021 are 24.3%, although, after the reforms of 2020, the share of women nominees of political parties had to be at least 30% [New composition of the Mazhilis of Parliament, 2021].

Uzbekistan, the second-highest-ranking country in terms of GII in Central Asia is situated in the second category of the HDI – “high human development”. In terms of the criteria of GII, three out of five categories are dragging Uzbekistan down, those being maternal mortality rate, women’s share of seats in parliament, and adolescent birth rate. Nevertheless, out of those three, within adolescent birth rate Uzbekistan is still the best in the Central Asian region with a birth rate of 23.79 per 1000. Unfortunately, the maternal mortality rate in Uzbekistan is almost three times higher than Kazakhstan’s one, also exceeding the average for the geographical region of Europe and Central Asia. Finally, female representation in Uzbekistan’s parliament remains relatively low – only 16,4%. Talking about positive factors, these are secondary level education coverage, which is close to 100% for both genders, and labour force participation. According to the study, 52.4% of female citizens in Uzbekistan are part of the labour market, for males the numbers are substantially higher – 78.1%. It is interesting to note that, compared to Kazakhstan, fewer women work, but more men, which creates a wider gender gap in terms of employment.

Talking about Tajikistan, together with Kyrgyzstan it is placed into the third category in HDI – “medium human development”. The country ranks 70th on the GII list. In terms of maternal mortality ratio (17 per 100.000) and share of seats in parliament held by women (20%), Tajikistan holds the second position in the Central Asia region. Yet the adolescent birth rate of 57.1 births per 1,000 women ages 15–19 is the lowest out of four countries presented. The same can be said about secondary education coverage of the population, which is quite high overall – 93,3% for females, and 95,7% for males, but the lowest in the region. Finally, the labour force participation rate for Tajikistan is extremely low, with only 31,3% for women and 52,8% for men.

Kyrgyzstan takes the last place out of four Central Asian countries represented within GII, placed 82nd out of 162 generally. The main contributors to the country’s relatively low position are maternal mortality rate of 60 deaths per 100.000 live births, the adolescent birth rate of 32.8 births per 1.000 women ages 15–19, and the highest difference in labour force participation rate of 30.9% between males and females.

Overall, it can be seen that the situation in the Central Asian region in terms of gender equality is quite diverse and the issues the countries of the region face are not the same. There is only one common success factor for all Central Asian countries – secondary education enrollment. However, as it was stated before for Kazakhstan, this criteria is quite formal, and all of the countries of the region still have to go a long way towards the increase in quality of their education. Only then the presence of education will guarantee the presence of subsequent knowledge, skills, and therefore of a better future for both genders.

Nurbaev Zh., (2020). Why Did Kazakhstani Schoolchildren Fail the International PISA Exam? Retrieved from https://forbes.kz//process/education/pochemu_kazahstanskie_shkolniki_provalili_mejdunarodnyiy_ekzamen_pisa. Accessed on 16.03.2021.