Geography of the Presidential Elections in Ukraine Ukraine held two-round regular presidential election on 31 March and 21 April of 2019 in a two-round system as it is regulated by its constitution. As no candidate received an absolute majority of the vote in the first round, a second round was held between the incumbent president Petro Poroshenko and Volodymyr Zelensky. According to the Central Election Commission of Ukraine. Volodymyr Zelensky won the elections by taking 73.22% of the vote whereas the incumbent president Petro Poroshenko took only 24.45% of the vote. A total of 2,344 international observers from 17 countries and 19 organizations along with 139 non-governmental Ukrainian organizations were officially registered to monitor the elections. The elections were held in all the territory of Ukraine except for Separate Regions of Donetsk and Luhansk Regions and the Autonomous Republic of Crimea. International observers admitted that the elections were free. transparent and democratic in compliance with international standards and procedures. Volodymyr Zelensky’s presidential term will begin on 3 June of 2019.

The presidential elections of 2019 in Ukraine were unusual in many senses, including in terms geography. Volodymyr Zelensky not only won a landslide victory in the elections by getting almost three quarters of the vote but also got absolute majority of the vote in 24 of the total of 25 regions where the elections were held[1]. By doing so, he became the first candidate to unite almost all the regions of Ukraine in regular elections. Therefore, Volodymyr Zelensky was given credit by many for becoming a popular President who managed to break the traditional East-West dichotomy and united almost all the regions of Ukraine (ru.krymr.com. 2019). The previous elections of May 25 of 2014, when President Petro Poroshenko was elected, were snap elections held right after the Ukrainian Revolution that took place in late February of 2014 in Kiev and during the invasion of Russian troops in eastern regions Lugansk and Donetsk. Therefore, the elections of 2019 are considered as the first act of unification of Ukraine in normal conditions as all regions of the country, except for one, unanimously voted for Volodymyr Zelensky.

Unlike many countries of the CIS. Ukraine has a rather long history of democratic and unpredictable elections of President and Parliament. The beginning of this political tradition can be traced back to 1991 when Ukraine had the opportunity of having presidential elections for the first time as an independent state. 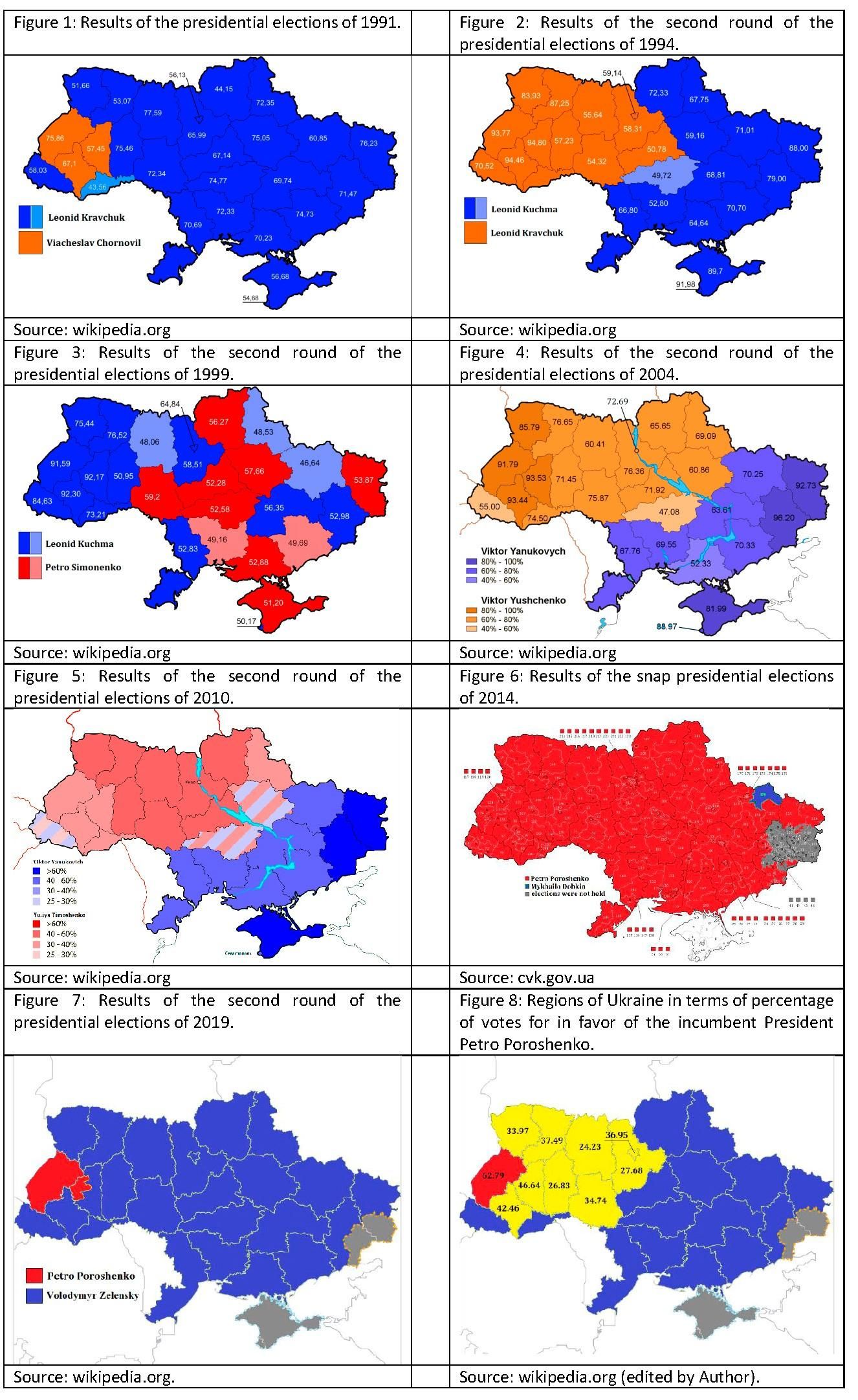 As we can see, the have always been a clear-cut geographical split in the way the regions of Ukraine vote for particular candidates. The East and West division or also referred as Southeast and Northwest division was always present throughout the electoral history of the independent Ukraine. It is conventionally believed that the eastern part of Ukraine is more influenced by Russia politically, economically and culturally. Therefore, the presidential candidates proposing more pro-Russian agenda usually gain much more political support in eastern regions than in other parts of Ukraine. On the other hand, the western part of the country has traditionally been more pro-European with strong reference to traditional core Ukrainian ethnic traditions and values. Consequently, presidential candidates with pro-European political agenda and traditional Ukrainian appeal usually had strong support in western regions of the country. It is interesting to note that preferences of the electorate were not related to the geographical origin or background of the presidential candidates and any candidate could easily become popular in the east as well as in the west. Moreover, the same candidate could be both pro-eastern and pro-western in different periods of time as did Leonid Kuchma in 1994 and 1999, who is the only Ukrainian president to serve two consecutive terms from 1994 to 2005.

The borderline between the two parts of Ukraine has been changing throughout the history shifting eastwards and westwards in periods. The core of the Ukrainian west is the historical region called Galichina, which currently encompasses the regions of Lviv, Ivano-Frankivsk and Ternopil. The maximum extension reached as far east as Uman–Kharkiv line (Karácsonyi et al., 2014). On the other hand, regions of Kharkiv, Lugansk, Donetsk, Dnipropetrovsk, Zaporizhia, Kherson, Mykolaiv, Odessa and Crimea were essential part of the Ukrainian east or southeast. Geographically the presupposed border between the two regions also reflect cultural, ethnic and linguistic patterns of the Ukrainian regions as we can see it from Figures 9-12 below. 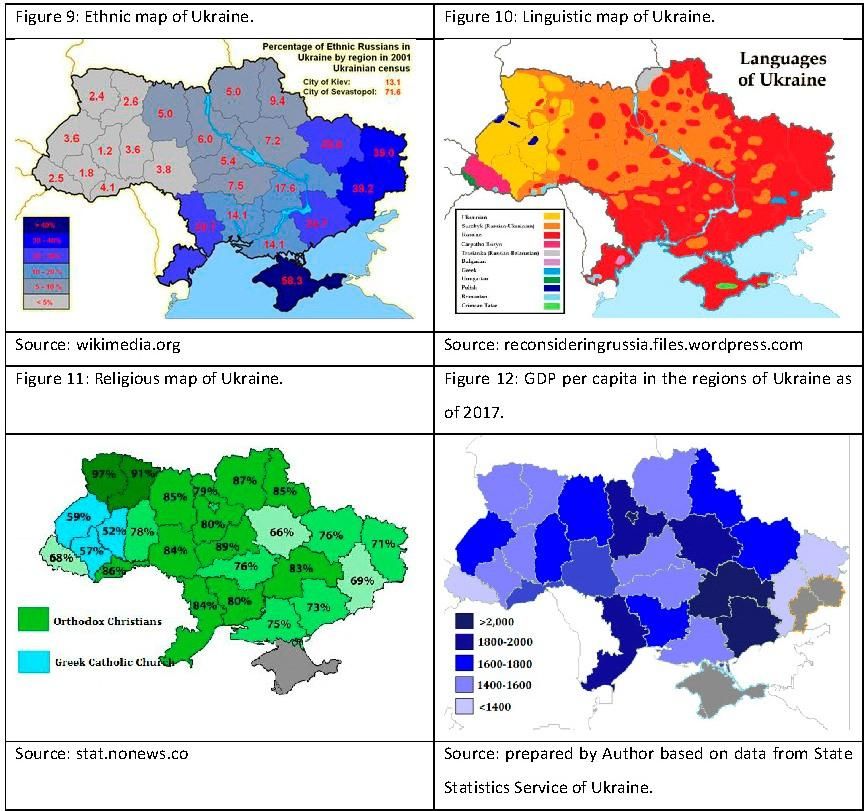 It is interesting to note that the east west split does not reflect any serious economic differences between the regions. Moreover, it is commonly believed that the electoral preferences and patterns of Ukrainian regions are driven by cultural, ethnic, linguistic and historical reasons and not by economic factors. So that objective economic changes during presidency of a particular candidate are not considered as factors affecting the electoral choice of population in particular regions during the next presidential elections. The cultural differences between the regions explain the east and west division of Ukraine well enough so that economic explanation is almost always disregarded. Indeed, if we compare income per capita between the regions of Ukraine, we cannot find any division between eastern and western regions (See Figure 12). The differences in terms of economic well-being is stark but there is still no clear split between east and west of the country.

However, if we look at the percentages of the votes in the regions of Ukraine, we can note that the previous pattern of east and west split was still present in the elections of 2019 but at much lesser extent than before. Figure 8 provides a map of Ukrainian regions painted in yellow where the incumbent president Petro Poroshenko got more or at least as much votes as nationwide whereas the rest of the regions where his defeat was significant are painted in blue. We can note that the geographical spread of regions where there is certain level of support of the President Petro Poroshenko is not random and the split between east and west is approximately the same as before with the exception of only two western regions of Chernivtsi and Zakarpattia. On the other hand, the traditional eastern and southeastern regions voted strictly against Petro Poroshenko and/or for Volodymyr Zelensky. In total, in ten regions out of 25 Petro Poroshenko got more votes than nationwide in percentage terms.

The distribution of votes between the regions can again be tribute to previous traditional split that stems from cultural, religious, linguistic and historical reasons. However, there were also certain economic reasons explaining the regional distribution of votes in presidential election of Ukraine in 2019. It can be easily seen simply comparing the regions of Ukraine in terms of some key indicators of economic performance as in Table 1 below.

It turns out that those regions having higher average annual GDP growth voted for Petro Poroshenko more often than others did. Seven out of ten regions where the incumbent President got at least 24% of the votes are ranked in the upper half in the list of regions by GDP growth during the last presidential term between 2014 and 2019. It is also interesting to note that these seven regions are among the nine regions that had positive GDP growth during 2014-2019. If we rank the regions in term of the GDP growth in 2017, we can see that eight out of the regions appear in the upper side of the list. All ten regions that provided relative support to President Petro Poroshenko had also positive GDP growth in 2017. The change of the gross regional income also provides the same regularity. The top seven regions in terms of gross regional income growth during 2016-2017 provide at least 24% of the votes to the incumbent President. Similar pattern can also be found in some other key economic indicators such as GDP per capita, income per capita, indices of human development etc. In general, regions that had better than average economic performance in certain economic indicators during 2014-2019 tend to appear in the list of ten regions that provided relative electoral support to the President Petro Poroshenko. Moreover, more recent statistical data tend show more clear relationship between the economic indicators of well-being and the popularity of incumbent President. In other words, the relationship between the level of support of the President Petro Poroshenko in certain regions of Ukraine apart from other factors is also related to the economic changes those regions. Hence, the electoral behavior of the Ukrainian population in the presidential elections of 2019 are not explained only by the history, culture, religion, language or the by influence of media, as it is commonly believed, but also by objective economic reasons and achievements made during the current presidential term in the regions of Ukraine. It seem quite logical straightforward for people to decide who to vote for in democratic presidential elections based on many factors including economic parameters.

The second round of the presidential elections in Ukraine were rather unusual as majority in 24 out pf 25 regions of Ukraine supported one of the two candidates. This time the election results were much less polarized along east-west axis that traditionally existed since the very begging of the history of independent Ukraine. However, the percentages of the votes in the regions of Ukraine show significant differences between the regions of Ukraine and the dividing line still goes along one of the previous conventional borders between east and west of the country. It turns out that, along with traditional explanations of the east and west electoral division of Ukraine such as historical development, linguistic landscape, religious affiliation etc. there are also economic reasons explaining the percentage distribution of the votes between the regions of Ukraine. In general, the regions with better economic performance relative to the rest of the country during the current presidential term and especially during the last 2-3 years tend to provide more votes for the incumbent president than other regions.

[1] Elections were not held in Crimea, the city of Sevastopol and parts of Lugansk and Donetsk occupied by Russian troops.