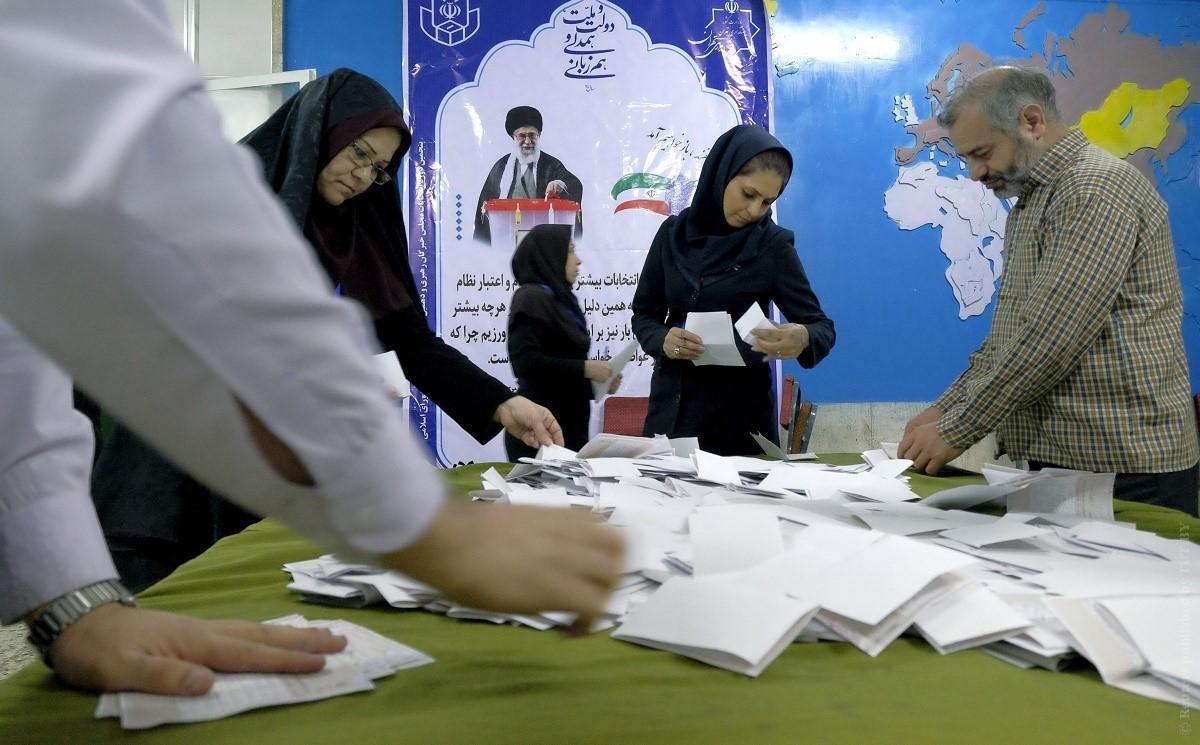 Speaking of the political system of Iran the consideration must be given to the fact that the Iranian politics operate within the framework of theocracy. According to the Iranian constitution dated December 1979 and its 1989 amendment, laws and regulations in the country must be based on Islamic ideology, which defines Iran as the Islamic Republic with a political order based on Shia Islam. Under these circumstances, ideological and political control over a political system is carried out by the Supreme Leader (Ayatollah) and by clerics who shadow every major function of the state. Combining unelected powerful institutions, controlled by the Supreme Leader, and elected officials such as the President and members of the Parliament, which official name is Consultative Islamic Assembly (Majles-e Shoura-ye Islami or Majlis for short) (Mohammadi, 2013) the political system of Iran confirms its uniqueness and complexity.

Therefore, as has been said, at the top of the Iranian power structure is Ayatollah Ali Khamenei, who succeeded Ayatollah Ruhollah Khomeini, the leader of the Iranian Revolution, after his death in 1989. Khomeini and Khamenei are the only two men to have held the office since the founding of the Islamic Republic in 1979. (Frontline, 2014) Since the Supreme Leader sets Iran’s major domestic and foreign policies, Ayatollah Ali Khamenei could appoint and dismiss the heads of several influential organizations in the military, the government, the judiciary (Mohammadi, 2013) and the supreme commander of the Islamic Revolutionary Guard Corps. He also appoints half of the members of the Council of Guardians, a hardline body of six clerics and six law experts that determine which candidates are qualified to run for public office by checking hopefuls for commitment to Islam, belief in the Velayat-e Faqih and the pillars of Iran’s revolution (Reuters, 2016). The Supreme Leader’s circle of power is shown in Figure 1. 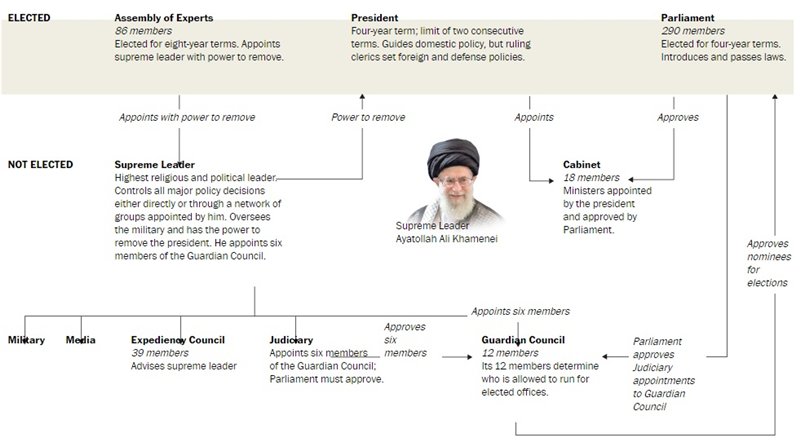 The President elected for the four-year term is the second-highest ranking official in the country. He is head of the executive branch of power and is responsible for ensuring the implementation of the Constitution. While the President is often the public face of the Iranian government he helps direct economic policies and social programs and represents Iran in many international forums. The President is assisted by the 10 Vice Presidents, as well as a Cabinet of 18 Ministers. It should be admitted the Majlis should confirm the members of the Council of Ministers.

Iran’s Majlis is a unicameral legislature comprised of 290 members who are elected to four-year terms. The Majlis appears to have roles that are similar to the functions of an ordinary Parliament. Parliamentarians draft legislation, ratify international treaties and approve the country’s budget. (Kagan, 2015) The Majlis has the power to summon and to impeach ministers or the President. However, all Majlis bills have to be approved by the conservative Guardian Council. Moreover, the Guardian Council also vets the qualification of candidates for the presidency and the Parliament.

It should be noted that there is a special institution, namely, Expediency Council, which is created to resolve deadlocks and conflicts between the Parliament and the Guardian Council. Acting as an advisory body for the Supreme Leader on domestic and foreign policies, the Expediency Council include public officials such as the President, the Speaker of Majlis and judiciary chief. The Supreme Leader appoints other members of the 39-seat administrative body.

It is important to mention that the Supreme Leader also has a right to appoint half of the members of the Assembly of Experts. Another half of members of the 86-seat Assembly are elected by direct popular vote every eight years. The Assembly of Experts is supposed to monitor the performance of the Supreme Leader and to remove him if he is deemed incapable or corrupted. (Mohammadi, 2013)

Therefore, the duality can be indicated as the specific feature of the Iranian politics. The executive branch has functions and responsibilities that are divided between the Supreme Leader and the President.  The Guardian Council and the Majlis also share similar responsibilities as legislative bodies. The armed forces are divided into the regular army and the Islamic Revolutionary Guards Corp and, within the judiciary, there is a separate court that deals specifically with cases involving deviant clerics (Special Court for the Clergy or Dadgah-e Vizhe Royhaniyoun). (Kamrava & Hassan-Yari, 2004)

Therefore, Iran’s politics should be understood in the context of the hybrid political system combining elements from both democratic and authoritarian systems. (Gilsin, 2016) In fact, parliamentary and presidential elections have become an integral part of the Iranian political landscape. Therefore, elections, have become the wildcard of Iranian politics. For instance, recent twin elections for the Majlis and the Assembly of Experts held on February 26, 2016, demonstrated the tight race between the contending candidates. Actually, the election process in Iran has its unique distinctive feature. For instance, despite the fact that according to the Interior Ministry of Iran, there are over 250 registered political parties in the country, they have no detailed platforms and disciplined membership. There is actually no strategy for linking the electorate to the party. (Razavi, 2010)

Therefore, the absence of strong political parties in Iran makes it difficult to understand how politics are actually organized and to identify the affiliation of an Iranian politician. As the political environment of the country has not been conducive to create the political parties, political factionalism has dominated Iran’s post-revolutionary era. (Alem, 2011)

Typical forms of political organizations in Iran include shifting alliances between political groups and prominent individuals, key socio-economic constituencies, and centers of power. (Majlis Monitor, 2016) In order to simplify the political situation in the country, all policy-makers are divided into two broad camps, namely, moderate and hardline (or principlist) camps.

A coalition of reformists, centrists or pragmatic conservatives together forms the moderate camp, which is more ready to confront the policy of hardliners. (The Guardian, 2016) The alliance is made up of members of dozens of parties, including the Union of Islamic Iran People Party, Nedaye Iranian, Iranian-Islamic Freedom Party, Association of Combatant Clerics, Islamic Labor Party and Moderation and Development Party, etc. Moreover, falling in the middle of Iran’s political spectrum, centrists, most notably, the parliament speaker, Ali Larijani, also expressed their intention to join the moderate camp during elections. Therefore, the main objective of working together is to minimize vote splitting and to maximize their chances of winning.

In contrast to the moderates, the hardliner camp includes loyalists to Ayatollah Ali Khamenei, emphasizing Islamic social values and supporting a free market economy, influential clerics, the elite Revolutionary Guards and powerful bazaar merchants. The coalition includes various parties like the Devotees and Path-seekers of the Islamic Revolution, the Front of Islamic Revolution Stability, Islamic Coalition Party and the Association of Combatant Clergy. (Reuters, 2016)

However, such a division of parliamentarian’s affiliation is conditional. For instance, in major cities like Tehran, politicians can appear as supporters of the reforms-oriented parties on certain issues, but at the same time, be their opponents on other issues. Therefore, it is quite natural for Iran that parliamentarians could be working closely with both principlists and moderates.

Turning to the results of the elections for the Majlis, it should be mentioned that there has been a significant increase in the number of parliamentarians from the moderate camp. Consequently, in the next Majlis the President Hassan Rouhani, who is widely considered a moderate, will enjoy the support of candidates who secured a nuclear deal with the Western powers, and who has pushed an opening, at least economically, to the rest of the world. (Gilsin, 2016)

Nearly 34 out of 55 million people eligible to vote, or approximately 62% of the electorate, turned out to vote. The Guardian Council approved 6,300 out of 12,123 candidates including 586 women and allowed to stand for election for the Majlis. Despite the fact that moderate candidates were largely barred from running, namely, the Guardian Council cut their number from 2000 to 200, representatives of the moderate camp could manage to gain the majority of seats in Tehran, which sends 30 representatives to the Majlis. Besides, as most of the prominent pro-reform candidates have been disqualified, the main pro-reform parties have agreed on a joint list of candidates, the “Alliance of Reformists and Government Supporters” (Reuters, 2016), better known as the “Hope List”, which also included women and young candidates.

Close cooperation between centrists and reformists during the election period should be considered as one of the main trends that began with the 2013 Iranian presidential elections. Reformists last rose to power in 1997 with the election of President Mohammad Khatami and secured a majority in parliament three years later. However, the balance of power was shifted back toward hardliners, who dominated the Iranian politics from 2004 until Rouhani’s election nearly three years ago. (Dareini, 2016)

Actually, despite the fact that there was a list of representatives of moderate camp it was still difficult to calculate the number of seats gained by representatives of the Hope and Principalists lists. According to the Majlis Monitor, in the parliamentary elections, the Hope List performed the best with 80 out of 290 seats or 27.5%, followed by the Principalists List with 64 seats or 22%, independents with 73 seats or 25.1%, and religious minorities with 1.7%. A total of 69 seats or 23.7% remain to be determined in a second round of runoff elections in April 2016. (Majlis Monitor, 2016)

However,  on the basis of the official report of the Interior Ministry of Iran (Information Center of the Interior Ministry of Iran, 2016) the Iranian Students News Agency claimed that moderates and hardliners had gained 83 and 75 seats in the parliament respectively. (ISNA, 2016) Moreover, the Iranian News Agency Entekhab stated that moderates had won the election gaining 83 seats in the parliament while hardliners and independent candidates had taken only 78 and 60 seats respectively. (Entekhab, 2016) The news agency Asriran provides similar information on the parliamentary elections results. (Asriran, 2016)

The inconsistencies concerning the Iranian elections results are mainly due to differences in approaches taken to identify political affiliation of the candidates.

Therefore, analyzing the parliamentary elections results it can be concluded, firstly, that there is continued uncertainty regarding the balance of power in the Parliament at least until the second round of elections, which are planned to be held in April. As we have already mentioned the runoff elections will decide the allocation of the remaining 69 seats. Therefore, there is still a chance for both camps to succeed in getting the majority of seats in the Majlis, especially, in case if they could form a short-term coalition with the parliamentarians who identify themselves as independent candidates. As a result, the possibility of either a Hope or Principalist list majority in the Parliament remains open.

Secondly, hardliners have been significantly weakened by the loss of key leaders and figures in Tehran. Despite the fact that hardliners camp managed their strong showing outside the capital the parliamentary result in Tehran will allow the President Hassan Rouhani and other moderates to significantly strengthen their position and to make the legislature somewhat more politically diverse. It is obvious that elected reformists will be an asset for Rouhani to pursue his domestic agenda, including social and economic reforms. (Dareini, 2016)

Finally, despite the fact that reformists and moderates, who widely support ideas of deepening the dialogue with the West and of implementing the policy of openness, partially restored their authorities in the Majlis, we should not expect that they will provide fundamental changes and drastic transformation of the Iranian society. Actually, all pro-reformist candidates approved by the Guardian Council have been proving their loyalty to the ideals of the Islamic Revolution.

Dareini, A. A. (2016). Iranian Hard-Liners Losers in Parliament, Clerical Body. Retrieved from http://savannahnow.com/news/2016-02-29/iranian-hard-liners-losers-parlia…

Frontline. (2014). The Structure of Power in Iran. Retrieved from http://www.pbs.org/wgbh/pages/frontline/shows/tehran/inside/govt.html

Majlis Monitor. (2016). Spotlight on Political Currents: How is political competition organized in Iran? Retrieved from https://majlismonitor.com/en/2016/02/spotlight-how-is-political-competit…