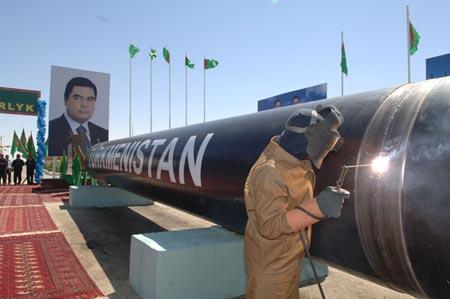 Inherited gas pipeline infrastructure, after the collapse of the Soviet Union, turned Russia into a monopolist on moving Central Asian energy resources to external markets in the 1990s and the first decade of 2000s. Possessing almost complete control over the transportation of the Central Asian gas abroad Russian authorities were in a position to dictate the terms of trading arrangements, particularly with its major supplier–Turkmenistan. Over the course of the past few years, gas export–import relationships between Turkmenistan and Russia has been rather unstable showing negative dynamics. Representatives of Gazprom, Russia’s state-controlled energy conglomerate, announced that the company stops purchasing Turkmen gas starting from January 2016. This announcement was immediately followed by another statement highlighting Gazprom’s plans to increase gas purchases from Uzbekistan in 2016. Some experts labeled these two interlinked statements as another move by the Russian authorities to force their Turkmen counterparts to change the terms of the gas trade that no longer suites Russia’s interests. I would argue, however, that this whole situation signifies Russian authorities’ attempt to adapt to a changing gas trading dynamics in Central Asia in which they no longer possess an upper hand.

Central Asian gas pipeline system was designed to operate in connection with the Russian gas pipeline networks in which Turkmenistan contributed the largest share of supplies. Having consumed 8 billion m3 Turkmenistan exported 86 billion m3 of gas to Russia and other former Soviet Republics in 1990.[i] Five lines of the Central Asia Center gas pipeline with the initial capacity to transport up to 90 billion m3 of gas, which was later reduced to less than 50 billion m3, and Bukhara–Ural gas pipeline capable of transporting up to 8 billion m3 of gas up until recently were the largest networks to move gas out of the region.[ii] Despite some ups and downs in the Russia–Turkmenistan gas trade in the 1990s, Russian authorities envisioned the boost of demand for the Turkmen gas in the future and signed a 25-year contract in 2003 to increase the volume of gas supplies to 80 billion m3 annually.[iii] However, supplies of Turkmen gas to and through Russian never reached the targeted level.

Russia needed Central Asian resources to keep up with the growing demand for gas in Europe. When the stability of the Russian gas supplies to the European customers was compromised, due to Russia–Ukraine gas crises in 2008–2009, the volume of trade started declining. Russia imported 42.6 billion m3 of Turkmen gas in 2007, but the volume of gas supplies dropped four times in 2009 and accounted for only 11.8 billion m3. Russia received 11.2 billion m3 in 2011, 10.95 billion m3 in 2013,[iv] 10 billion m3 in 2014 and less than 5 billion m3 in 2015.[v] A complete supply cut of the Turkmen gas export, however, was instigated by the disagreements between two parties over the terms of contract and delays in payment. In response to the request by Gazprom to reconsider the terms of gas contracts, according to which Russia was obliged to pay the average European price for the Turkmen gas plus cover the transit fees, Turkmen representatives first blamed it for turning into an “insolvent partner,” but later claimed that that Gazprom was not delivering full payment for the received gas.[vi] In its turn, Gazprom filed a case in international arbitration court in Stockholm demanding a revision of prices. As a result, Turkmengaz has received a notification on January 4, 2016 that Gazprom Export stops purchasing gas from Turkmenistan. Following the notification Gazprom representatives made an announcement on increasing the volume of gas trade between Russia and Uzbekistan indirectly point out to the possibility to replace Turkmen gas with Uzbek supplies.

But the analysis shows that the so–called “growth” in the Russia–Uzbekistan gas trade is over exaggerated and thus a rather weak argument to force Turkmen authorities consent to new terms. During the negotiations for the new gas sales agreement between Gazprom and Uzbekneftegaz, which took place in December 2015, parties agreed that the former would increase the volume of gas import from Uzbekistan in 2016. Alexey Miller, CEO and chairman of the Gazprom, confirmed saying that “We highly evaluate the results of the negotiations, which we achieved together with our Uzbek friends. Uzbekistan is our reliable partner in the gas sector and we will continue mutually beneficial cooperation in the future. And, it is not surprising that the volume of Uzbek gas purchases will increase this year.” According to Alexey Miller Gazprom will purchase 3.1 billion m3 of gas from Uzbekistan in 2016.[vii] It is indeed higher than 1 billion m3 of Uzbek gas imported by Gazprom in 2015, but not if one compares it to the average gas trade over the past decade. These two countries used to engage in a higher level of gas trade in the past. According to Gazprom official website, Uzbek natural gas purchased by Gazprom amounted to: 2007 – 9.6 billion m3; 2008 – 14.2 billion m3; 2009 – 15.4 billion m3; 2010 – 13.9 billion m3; 2011 – 8 billion m3; 2012 – 8.7 billion m3; 2013 – 5.66 billion m3; and, 2014 – 4 billion m3.[viii] Thus, the so-called gas purchase increase (3.1 billion m3 in 2016) can hardly represent a real gas trade growth between these two countries capable of replacing Turkmen supplies.

Yet again Russia tried to position itself as a game changer in the very recent dispute over the price for the Turkmen gas. Since purchasing Turkmen gas on existing terms bears financial loss to the Russian economy, gas trade suspension perfectly suits Russia’s interests. It was the Gazprom’s decision to stop the gas supplies, not the other way around. And Turkmen representatives providing explanation for the suspension of gas purchases from Turkmenistan this time chose a milder tone point out to the “changing conjuncture on the international gas market” as well as “economic and financial issues arising at Gazprom Export.” On top of that, they indicated their readiness to start negotiations on a wide range of issues, most likely including the resolution of the dispute.[ix] While by suspending Turkmen gas purchases the Russian side succeeded to play the cards to some extent in its favor, the conflict clearly shows that Russia is no longer in a position to dictate the terms of gas trade as it used to. And in case the Turkmen gas supplies to Russia are restored in the near future, it will equally be dictated by Turkmenistan’s interest in sustain the gas trade.

After China succeeded to challenge the Russian monopoly by putting in place Line–A, –B and –C of the longest gas pipelines in the world the volume of gas export to China has been gradually increasing since 2009. During the Shanghai Cooperation Organization’s summit in Beijing in June 2012, the countries’ presidents, Hu Jintao and Gurbanguly Berdymukhamedov, agreed to increase the amount of gas exports to 65 billion m3 per year.[x] With slightly over 40 billion m3 of gas export capacity, Turkmenistan is trying to keep up with the Chinese gas demand by reducing exports in all other directions,[xi] thus turning highly dependent on a single gas market, the similar sort of dependence that Turkmenistan was struggling so hard to avoid. Besides, Turkmenistan fails to make much of a profit from the payment arrangements with China. The exact gas price paid by the Chinese customers for the Turkmen gas is not openly revealed. However, since China covered the lion’s share of the pipeline network construction, part of the gas is being exported as a payment for the financial support provided. This implies that the contribution to the Turkmen budget from gas exports to China will be limited at least until Chinese investments are recovered.

On top of that, the only other existing alternative – the Iranian gas export corridor – is about to be closed, leaving Turkmenistan entirely dependent on the Chinese market. Turkmenistan exports around 6–8 billion m3 of gas to Iran via two pipelines, which are capable of transporting up to 20 billion m3. Iran, however, aims to reach self-sufficiency in gas supplies by developing its 15th and 16th phases of the South Pars field, the largest in the world, within its gas expansion program already by May 2016. [xii] When Iran achieves the gas production level to meet its own needs, Russia will remain the only alternative for Turkmenistan to diversify its dependence on China.

So the analysis shows that the Russian authorities no longer possess transit leverage to dictate the terms of gas trade for their Turkmen counterparts and can hardly replace Turkmen gas with any other supplies from the region. At the same time, Turkmen authorities themselves are very much interested in keeping the Russian corridor functioning for the export of gas to generate revenues to the budget. While it is currently challenging for the parties to boost the energy trade, sustaining gas supplies in a relatively limited volume meets the economic interests of both Turkmenistan and Russia. There is a possibility for the Turkmen gas supplies to and through Russia to be restored in small quantities, which do not significantly affect Turkmenistan’s ability to fulfil its obligations to increase gas supplies to China, under the conditions that (a) Turkmen authorities are allowed to directly sign gas contracts with the European customers, which are still the highest paying consumers in the region or (b) if the Russian Gazprom offers a reasonable price for the Turkmen gas and parties re-negotiate the coverage of transit fees. Engaging in the gas trade based on the above-mentioned conditions would ensure stability of supplies, as the trading dynamics would not be guided by politically–driven motives.

[i] Nazar Alaolmolki, Life after the Soviet Union: The Newly Independent Republics of the Transcaucasus and Central Asia (Albany: State University of New York Press, 2001), 102.