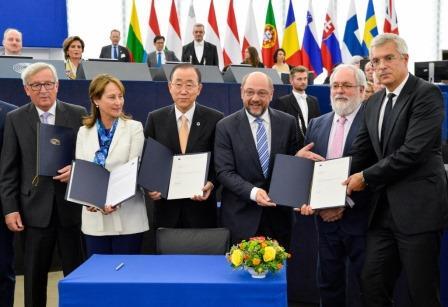 The Paris Agreement on climate change was reached during the United Nations (UN) Climate Change Conference held in Paris in December 2015. According to the Intergovernmental Panel on Climate Change (IPCC), temperature rise above the 2 oC limit would have catastrophic and irreversible consequences, such as an increase in natural disasters related to climate change. Consequently, the agreement binds the parties to keep the temperature average below 2 oC above the preindustrial levels and to try and limit the temperature increase to 1.5 oC.

The agreement was first opened for signature on April 22, 2016 in New York. The period of signature is to last for a year with the deadline of April 21, 2017. Signature obliges the countries to avoid actions that would contradict the statements of the agreement (Jones and Hare, 2016).

The ceremony of ratification of the document was held on September 21, 2016. The main emitters, China and the United States (US), whose emissions account for almost 40% of global emissions, ratified the agreement ahead of the schedule at the G20 meeting in China on September 4, 2016. This is especially surprising as the Kyoto Protocol, which was aimed at reduction of emissions by developed countries, was signed but never ratified by the US. On October 2, 2016 India also joined the number of countries who have ratified the agreement, becoming the 62nd country on the list (Европарламент ратифицировал, 2016). The European Union (EU), which is the third largest greenhouse gas emitter, voted on ratification of the Paris Agreement on October 4, 2016, pushing the double threshold of ratification by at least 55 countries whose carbon dioxide (CO2) emissions account for no less than 55% of total emissions.

On September 30, 2016 Environment Ministers of all 28 countries of the EU agreed to ratify the agreement (Европарламент ратифицировал, 2016). On October 4, 2016 the threshold was finally met. The European Parliament has ratified the Paris agreement on climate change. The Agreement is to enter into force on November 4, 2016, 30 days after the ratification process hit the double threshold. Thus, the treaty will enter into force earlier than the UN’s next climate meeting, which is to be held in Marrakesh, Morocco on November 7, 2016. Hitting the double threshold as early as October 2016 is a positive sign, which is pushing the Paris Agreement to enter into force earlier than the initial target date of 2020.

The ratification process obliges the countries to follow the terms of the agreement at the international level. The countries who ratify the agreement are expected to present a national plan which is targeted at limiting global temperature rise. The agreement does not set strict rules. Therefore, it is important for each country to come up with its own plan of actions based on the current environmental situation of the nation.

The countries who have already ratified the agreement are not allowed to quit the treaty for four years. This rule of the treaty, along with the early ratification, have an advantage for the current US President, Barack Obama, whose term is nearing the end, securing Obama’s climate decisions to some extent, as the Republican candidate for president, Donald Trump, has vowed to roll back on climate change measures taken by Obama. Nevertheless, the question of whether Trump would do anything to fulfill US’ climate commitments stays unanswered.

As for the Central Asian states, Uzbekistan have not even signed the agreement so far. Despite signing the treaty, none of the other Central Asian countries, whose global emissions are relatively low, Kazakhstan (0.84%), Kyrgyzstan (0.03%), Tajikistan (0.02%) and Turkmenistan (0.20%), have not yet ratified the document (Projected Paris, 2016). Kazakhstan have expressed an intent to ratify the treaty by the end of 2016.

The timing of the ratification process is different for each country, as it depends on the preparedness of each country to adjust their domestic policies according to international regulations. Thus, response of the Central Asian states shows the unpreparedness of the countries to adjust their environmental policies according to the requirements of the Paris Agreement.

The main advantage of the document is the existence of the double threshold, which signifies that couple large emitters or a large number of countries who do not produce large amounts of CO2 emissions cannot force the rest of the world to follow the decree (Jones and Hare, 2016).

However, it is doubtful whether the countries would be able to follow through with their commitments, rising a question of whether the action plan would be fully implemented, as one of the main disadvantages of the document is the lack of specifics on the quantity of emission reductions and the absence of regulatory body. In this regard, each country ratifying the agreement is expected to develop its own environmental policy. Moreover, there is no punishment for the governments who fail to meet the requirements of the agreement. The only regulation, in the framework of the agreement, is conducted by a group of international experts which verifies the information on reduction of greenhouse gases provided by each country. In other words, none of the countries who have ratified the agreement have made any promises regarding the terms of the agreement. Another important issue is that despite the increasing investments into clean energy, the amount of investments into fossil fuels is still quiet high.

To conclude, although a number of issues related to the fulfillment of the treaty still exists, the early ratification of the agreement gives hope to slow down and hopefully to reverse effects of the global climate change. Moreover, the ratification shows the willingness of if not all the countries, but at least of the most of them to take action to solve the climate issue.

Jones, D., & Hare, B. (April, 2016). Paris climate deal signing ceremony: What it means and why it matters. Climate Analytics. Retrieved from http://climateanalytics.org/blog/2016/paris-climate-deal-signing-ceremon…

*Published in the November 2016 No. 11 issue of the “Asya Avrupa: Haber-Yorum” journal.