Reflections on the 70th Anniversary of the National Academy of Sciences 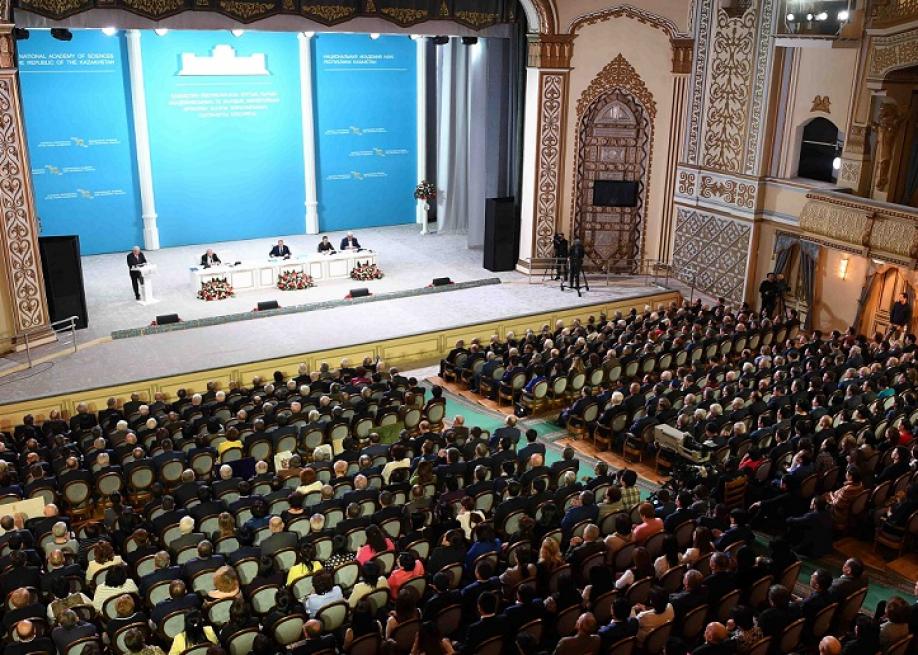 February 22, the National Academy of Sciences held a general meeting on the 70th anniversary of its foundation, to which Nursultan Nazarbayev, the President of Kazakhstan, was invited, and for the first time in recent years, the general university community – teachers and professors of universities of Almaty were present as guests. This situation obviously was to demonstrate the convergence of academic and university structures that followed the reform of the Academy, which took place in the late 90 – early 2000.

The main positive impression of the solemn session was a minimum of pomp and a maximum of businesslike. Four appearances – report of M.Zh.Zhurinov, the President of the Academy, and congratulations of his foreign counterparts – the Presidents of the Russian Science Academy V.E. Fortov and Moldova Academy G.G. Duca were brief enough. The key speech was the Kazakhstani President speech, the main provisions of which have been highlighted in all the media.

The report by the president of NAS “The role of the National Academy of Sciences of the Republic of Kazakhstan in the development of science, culture and economy of Kazakhstan” is not so actively discussed in society and in the media, which create public opinion, as the speech of the President of the Republic, even though he had to give an answer to the question troubling many scientists – to what results brought the reform of the Academy, one of the most painful and radical processes of changes in the independence era?

Unfortunately, very little was told about the achievements, no more than 20% of the total content of speech, while much more words were devoted to the historical excursus to the establishing period and the first steps of development of the institution and to approval of the policy pursued by the President and the structures of power within and outside the country.

Activities of the Academy, judging by the report, have been reduced to the following functions: “National Academy of Sciences of Kazakhstan takes part in the definition of priority directions of development of the republic of science, prepares the annual National Report on Science for submission to the Head of State, promotes scientific achievements through the issuance of eight academic journals, participates in international conferences, exhibitions and competitions for State Prize in the field of Science and Technology, is assisting in the development of international scientific cooperation and innovation, is involved in the conduct of scientific expertise on fundamental and applied research». [i]

The fact repeatedly sounded during the solemn meeting that NAS RK in its activity is not engaged in administrative matters, means that the Academy does not receive a fixed funding; only indirectly, through the examination of the project, participates in its distribution, and has no real tools to stimulate research activity.

However, many international academies of science are in a similar situation, moreover, from the very beginning they were set up for these functions only. For example, the Norwegian Academy of Science and Letters is a non-governmental, at the national level, and cross-disciplinary body, which covers all areas of learning. The main purpose of the Academy is the development of science in Norway. It provides a national forum of communication within and between the different disciplines and scientists, and represents Norwegian science to foreign academies and international organizations.

The Academy performs these functions by initiating and supporting research projects, by organizing meetings and seminars on topics of common interest, by publishing scientific and research papers, as well as participation in various national and international scientific organizations. [ii]

One more example: Philippine Academy of Sciences functions are formulated in much the same:

it constantly explores and maintains contacts with foreign academies of science and technology, as well as with international and regional networks and local research organizations to develop close scientific cooperation.

These ties are aimed at:

(1) promotion the development of a joint effort between the Philippine scientists, as well as between Philippine and foreign scientists;

(2)  promotion and development of scientific cooperation through scientific exchange,  visit programs  within the framework of the Memorandum of Understanding between the Philippine and foreign scientific academies;

(3) support for participation in international conferences, meetings, forums, seminars, workshops, and other types of scientific activity; and

(4) publication and exchange of scientific literature.

With these scientific contacts, interested scientists can seek grants for scientific and technological projects, including scholarships, research grants, study tours, as well as grants to other joint projects of the Academies that have relations with the National Academy of Science and Technology. [iii]

As for the activities of the French Academy, chosen as a model for Kazakhstan in reforming the Kazakh Academy of Sciences of the Soviet type, since its inception, the French Academy has strongly sought to develop science and to give advice to public authorities within its competence.

Today, members of the Academy perform their tasks to the nation and the Academy’s funds, in standing committees and working groups established by the Academy. Among these tasks:

Production of knowledge, and the motivation to see new opportunities or just because of curiosity, is a vital factor for economic and cultural dynamics of any nation. Academy supports research in France through:

• participating in the debate on topical issues of science;

• the awarding of prizes and medals, financed by the Academy’s  funds or individual contributions, sponsors, families or companies; these awards are allocated to the most worthy scholars, prospective studies and projects;

• publication of the Proceedings of the Academy of Sciences, established in 1835 for the international scientific community.

2) Promoting the teaching of science

in the field of science education, encouraging citizens is necessary for the formation of a healthy, critical mind and the Academy contributes to this mission by:

• organization of research on how science is taught today, from primary school to university level;

• stimulating a special program La Main à la pâte, used in primary and secondary schools, for which the Foundation is established to assist in the training of teachers for the academic curriculum;

• building a network of academic scientific advisers to the regional education authorities;

The scientific community has an obligation to explain and share new knowledge with the public, so the Academy plays an important role in the dissemination of scientific culture by:

• organization of public meetings, where key scientific issues can be openly discussed;

• providing bilingual public website, a resource center for its activities and achievements;

• publication of quarterly report, which  reflects the ideas and problems of the Academy;

• participating in the interaction between scientists and parliamentarians, this activity contributes to the strengthening relations between science and society;

• save its files, part of the scientific heritage of France;

• opening, staffing and maintenance of museums under the name «Maisons des Illustres ”.

Science itself is universal and the challenges that the world faces, are mostly of the world order too. Academy contributes to strengthening the international sphere of science, by:

• promoting and participating in international networks of academies;

• representing the interests of France in the international scientific institutions and other bodies.

Analysis of possible scientific and technological solutions to the various problems is within the remit of elected politicians, but they should be able to do so on the basis of examination of the Academy as an advisory body; while the Academy may create their own commission for this kind of research.

Its conclusions should be published:

• in the memo, and recommendations;

• in the form of expertise, for which the Academy adopted the Charter of examination in 2012.

Thus, the French Academy is an independent institution, has a privileged statute among research institutions in France. Under the protection of the President of the French Republic it is free to organize its internal administration system, and is provided with full financial autonomy under the direct and exclusive control of the Accounting Chamber (the controlling authority in France). This degree of independence also stems from the members’ election system. Professionalism, openness to everything new and multidisciplinary are the hallmarks of the Academy, whose members are among the most prominent French and foreign scientists of the time. [iv]

Yet, despite the public nature of the organization of academies, they all have powerful sources of funding. Otherwise, how could the Norwegian Academy of Sciences annually award the Abel Prize for outstanding scientific work in the field of mathematics since 2003? The prize fund is 6 million NOK (approx. 730,000 Euro or US $ 1 million).

The French Academy of Sciences annually allocates about 80 awards: Grand Medal is awarded annually, in rotation, in respective disciplines of each Department of the Academy, to French or foreign scientists who have contributed to the development of science crucially, Richard Lounsbery Award, Award of Jacques Herbrand – for mathematics and physics, the prize Bachelier for outstanding contribution to mathematical modeling in finance, Prise Michel Montpetit in computer science and applied mathematics, awarded since 1977, Lecomte Prize, awarded annually since 1886, as a recognition of the important discoveries in the field of mathematics, physics , chemistry, natural history and medicine.

As part of the scientific and financial cooperation of the Academy of Sciences, the Ecole Normale Superieure (Paris) and the Ecole Normale Superieure (Lyon) in 2011 established the Foundation “La main à la pâte”, whose activities are aimed at improving the quality of science and technology of teaching in primary and secondary schools, and carried out within the France and at the international level, assisting and training teachers. Program helps to implement training to help teachers encourage scientific spirit of students to form an understanding of the world and the possibilities for expression. Outside Europe, the Foundation implements cooperation agreements with various foreign partners, organizes trainings, offers free access to resources or publications, and especially open to emerging market and developing countries. Each year, the Foundation organizes an international seminar in Paris with the support of the Ministry of Foreign Affairs and its diplomatic network. Gathering of 50 participants from around the world in one week, the spread of scientific education based on queries, lead to fruitful cooperation. [v]

All of the above requires a significant investment, which can afford countries with a high percentage of GDP allocated to scientific research and development. For example, Norway in 2015 spent 1,935 and France – 2.230 per cent of GDP. [vi]