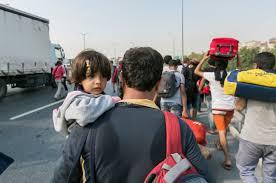 In 2015, the number of people who forcibly leave their homes reached to 65.3 million people. Among them, 21.3 million are refugees and 40.8 million of them are relocated within their country. Comparing with 2014 this figure is increased by 5.8 million where developed countries host only 5% of them meanwhile 86% of them reside in developing countries. Among them, for a second consecutive year Turkey hosts the largest number of refugees worldwide with hosting almost 3 million Syrian refugees and others (UNHCR, 2017).

In its sixth year, civil war has forced 12 million Syrians to leave their homes where 6.6 million of them are moved to safer locations in Syria and 5 million of them seek refuge abroad. The majority of the Syrians have fled to neighboring countries such as Turkey, Lebanon, Jordan, Egypt, and Iraq (UNHCR, 2017). Out of these 3 million Syrian refugees, only 10% of them are living in the 26 refugee camps where 90% of Syrian refugees are residing outside the camps (UNCHR, 2017). In order to live outside the camps, Syrian refugees need to find a job to cover the basic needs of their families. Until January 2016 Syrians under the temporary protection status have work informally since their status do not allow them to apply for work permit. Therefore, it is estimated that there are around 400,000 Syrians working informally in different sectors (Taskin, 2016).

Syrians under the temporary protection status have access to basic needs such as health, education and legal assistance services through a provisional identity card. The permission to apply for working permit for Syrians is not considered at first because of Turkey’s approach to the crisis. Turkey’s strategy on helping the refugees was shaped by providing immediate assistance for those escaping from civil war in Syria (Kadkoy & Kaymaz, 2017). Therefore, well-equipped massive refugee camps have been established mostly in the Southeastern region especially in cities that share a border with Syria in order to cover the basic needs of refugees. Since 2011, Turkish Government has already spent more than $12.4 billion on providing humanitarian aid to Syrian refugees and with the inclusion of assistance provided by non-governmental organizations the amount exceeds $25 billion (Hurriyet & European Parliament, 2017).

However, the conflict between regime and opposition forces in Syria continued to prolong and the need for a more comprehensive long-term planning increased over the years on the issues of management and adaptation process of Syrians. Therefore, the Turkish government has started to change its perception towards the crisis from immediate response to an intermediate period of integration of Syrians into Turkey. In line with his new policy direction, Turkey has started to improve its regulations and renewed its 1994 Asylum regulation with more comprehensive new Law on Foreigners and International Protection in 2013. Moreover, the establishment of Directorate General of Migration Management (DGMM) has increased the effectiveness and strengthened the management of migration crisis (Icduygu, 2015).

The new changes in Law on Foreigners and International Protection in 2013 has eased the conditions of obtaining a work permit for high-skilled foreigners and refugees who are already staying in the country for a long time. However, Syrian refugees cannot benefit from these incentives due to their temporary protection status. According to 1951 Geneva Convention, Turkey gives refugee status only to Europeans due to the geographical limitation in the document (Kadkoy & Kaymaz, 2017). Thus, in order to allow Syrian refugees to obtain a work permit Regulation on the Work Permit of Foreigners Under Temporary Protection accepted in January 2016 (Icduygu, 2016).

The regulation indicates that Syrian refugees whose registration of under temporary protection status is older than 6 months could apply for obtaining a work permit. Employers or the individuals should send the application online to the Ministry of Labor and Social Security. Within the regulation, there are three major points; first, employers must pay at least minimum wage to Syrian refugees and second, the number of Syrian refugees cannot exceed the 10% of the total number of employees in a company (Icduygu, 2016). Furthermore, Syrian refugees can only work in their registered area with their work permit (Kadkoy & Kaymaz, 2017).

In 2016 13,298 Syrians has received work permits (Gonultas, 2017). There are a number of reasons, which might be limiting the rapid growth of obtaining work permits. First, according to AFAD survey in 2013, an average wage of a Syrian refugee is around $236, which equals to almost half of the minimum wage in 2013. Therefore, some employers might not be so enthusiastic to obtain a work permit for their employees, which will increase their expenses. Another factor is a common issue for many immigrants, the lack of knowing the host country language. Many Syrians do not know Turkish therefore concerning the first point if employers have to choose they could prefer to hire locals since there will not be any price advantage for hiring a Syrian (Kadkoy & Kaymaz, 2017).

Briefly, former policies have looked at the Syrian refugee flow to Turkey as a temporary issue that will be solved when the conflict is over. However, the new approach considers preparing long-term plans in order to start the adaptation process of Syrians into their new lives in Turkey. Moreover, the changes in the regulations do not limit with solving the work permit issues of Syrian refugees but considered as comprehensive plan to improve the regulations. Aimed to attract highly skilled foreign workers and soften the access for all migrants including Syrian refugees under the temporary protection status of the labor market (Icduygu, 2016).

Therefore analyzing the economic integration issues of Syrian refugees is an essentially important topic in order to define the obstacles in their inclusion process and provide policy recommendations related to these problems. For instance, under the current regulation, the maximum quota for the work permit in the city of Kilis is 1.600 since there are 16.000 people are employed by businesses in the private sector. The problem here is that there is 130.000 Syrians reside in Kilis and according to the regulations Syrian refugees could only work in their registered area. On the other hand, Syrian refugees in big cities like Istanbul, Ankara or Izmir will not face this problem since the labor market capacity in these cities is large enough to absorb them. Therefore, the geographical limitation creates a structural problem in cities with a small labor market capacity (Kadkoy & Kaymaz, 2017).

On this point, in order to provide flexible conditions for Syrian refugees, the geographical limitation can be removed or a certain limit could be established taking into account: the number of Syrian refugees, job opportunities and labor market capacity in the area. The cities, which pass this limit, could be exempted from the geographical limitation allowing a tailored solution for this problem. This would also prevent the influx of Syrians to migrate to big cities.

Thus, one of the major pressing issues in their integration into society is their economic integration into the labor market in Turkey. Looking at the age structure of Syrian refugees in Turkey majority of the Syrian refugees are consist of young people where only 3% of them are over 60 years old. Moreover, 45% of them are under 18 and 52% of them are in between 18-59 years old. This is a good sign for Turkish labor market since more than half of them are within the range of working age population (15-64) (UNCHR, 2017). 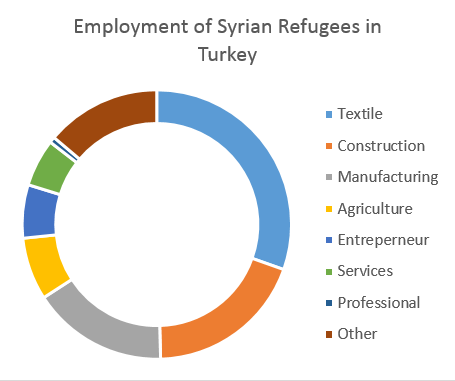 Syrian refugees mostly found jobs in textile, construction and manufacturing sectors. These sectors have a potential of providing both skilled and unskilled job opportunities in large scale. In addition to that, 6.4% of them have become entrepreneurs and opened their business (Taskin, 2016). Moreover, in general, 42.5 % of entrepreneurs in Turkey who were able to provide jobs in 2015 are started their operations during the 2011-2015 years. Meaning, almost half of the current enterprises are opened during the 4-year period. It could be said that Syrian entrepreneurs have positively contributed to this growth (TUIK, 2017).

In migration literature, economic contribution potential of migrants in the host country argument is often used to demonstrate the benefits they bring with themselves. Because when migrants arrive at a host country either voluntary or forced, they bring their socio-economic experiences and networks with them. In the case of Syrian refugees in Turkey, there are many doctors, teachers, lawyers, engineers, businessmen and many other professionals, which could positively contribute to the economic development in Turkey. For instance, in case of Syrian entrepreneurs when they come to Turkey many tried to revive their businesses based on their capital and business networks. 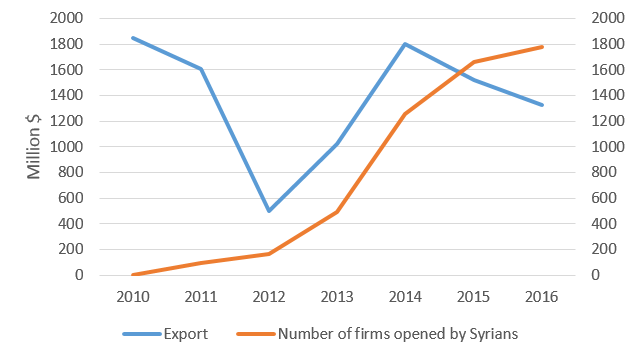 It could be said that some Syrian entrepreneurs seem to re-establish their business connections in Turkey, which reflect positively to export dynamic of Turkey to Syria. Trade relations between Turkey and Syria during the pre-civil war period have gradually increased over time. Turkey’s export to Syria has risen from $264 million in 1991 to $281 million in 2001 and to $1.6 billion in 2011. After the start of a conflict between regime and opposition forces, the export amount has fallen 4 times to $497 million in 2012. However, starting from 2013 the Turkish exports to Syria have started to increase sharply and came close to pre-civil war period level in 2014. This increase could be associated with the significant increase in the number of jointly established companies with Syrians in Turkey. During the 2011-2016 years, the annual number of companies opened jointly with Syrians has grown 17 times jumping from 98 in 2011 to 1777 in 2016. In total within five years, 5450 firms opened mostly in Istanbul and in Southeastern Turkey where almost half of these companies are established in Istanbul. During the same 5-year period in total, the seed capital of these joint companies has reached 1.1 billion Turkish lira ($313.6 million) (TOBB, UNComtrade.com, 2017).

A recent World Bank report has analyzed the impact of Syrian refugees on the Turkish Labor Market in 2015. The results of the report have shown a number of interesting results. According to the report, an increase in the number of Syrian refugees in sub-regions of Turkey negatively affects the local informal, part-time and field workers in the agriculture sector. This trend is logically understandable and shows that for employers local workers in these categories are exchangeable with Syrians. However, at the same time increase in a number of Syrian refugees provides more job opportunities for full-time workers and highly skilled workers. In addition to that, their negative effect in terms of educational level is also limited to local workers who have at most high school diploma whereas Turkish workers with higher degrees positively affected by the increasing trend. In short, Syrian refugees’ impact on the Turkish labor market has mixed results; on the one hand, they displace local informal workers and people with low education in the labor market, on the other hand, they positively affect the creation of new jobs for high-skilled workers (Carpio, Wagner, 2015).

In conclusion, Turkey will continue to host a large part of the Syrian refugees even after the civil war period. Therefore, at first, their economic integration into the labor market is an essentially important issue and the Turkish government is taking necessary steps to assist their inclusion process. These improvements need to continue in order to provide solutions to new problems like a geographical limitation in the work permit, which shows that a general regulation does not match with the realities in different cities. Moreover, untapped potentials of intellectual capacity, business connections and work experience of Syrians need to be used more effectively in order to increase their contribution to society and the economy.

Icduygu, A. (2015). Syrian Refugees in Turkey the Long Road Ahead. Migration Policy Institute and Transatlantic Council on Migration. http://www.migrationpolicy.org/research/syrian-refugees-turkey-long-road-ahead