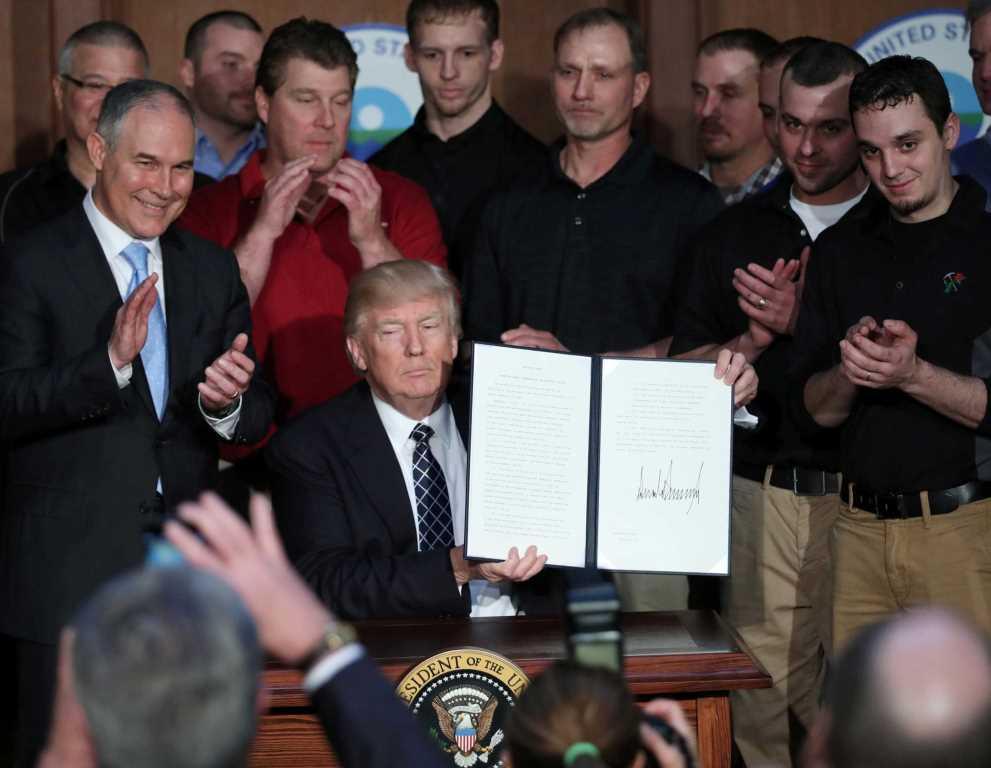 On March 28, 2017, President Trump signed an executive order which rolls back Obama’s environmental regulations, including Obama’s Clean Power Plan (CPP) (BBC, 2017). CPP was aimed at cutting fossil fuels from electricity production in order to curb climate change and limit environmental pollution while helping the country to prepare for the future impacts of global warming. According to the CPP, carbon dioxide (CO2) emissions were to be cut in order to meet the Paris Agreement commitments. In 2007, CO2 was recognized as pollutant under the Clean Air Act. Later, in 2009, the U.S. Environmental Protection Agency (EPA) ruled out that CO2 and some other gases are responsible for climate change (McGrath, 2017). However, the CPP has been unpopular among Republicans, who support fossil fuel businesses. In order to cancel the CPP, Trump’s administration has to propose new regulations to the EPA. However, this process might take years. The CPP has been long halted in the courts, and now, Trump’s administration is planning to delay the process even further in order to draw a weaker replacement in the meantime.

President Trump is a climate change sceptic. Back in 2015, President Trump called human induced climate change a hoax. Ironically, in November 2016, he agreed that there is a correlation between human activity and climate change (BBC, 2017). Currently, the main argument that Trump’s administration is proposing is that climate change is real, however, it is not caused by human action. President Trump believes that environmental regulations should cover the issues related to water and air and not carbon dioxide. He refers to the CPP as a “war on coal” and “job-killing regulations” and intends to replace the initiative by new set of rules allowing to develop coal and oil and gas industries. Nevertheless, while the 2016 moratorium on the sale of new coal leases on federal lands might be lifted as a result of the new rules, creation of new jobs at the coal-fired power plants would not be an easy task as coal plants were shut down not as a result of the CPP but as a consequence of mercury pollution associated with coal burning (McGrath, 2017). In this light, while President Trump’s supporters believe that his initiative is to create jobs in the fossil fuel industry, the opponents argue that the new jobs will be mainly provided to lawyers, and not for oil and gas workers.

During his pre-election campaign, President Trump promised to pull of the Paris Agreement. Besides, President Trump has made a promise not only to withdraw from the Paris Agreement, but also to pull off all the funding from the United Nations Framework Convention on Climate Change in order to fund infrastructural projects. So far, President Trump has signed the Energy Independence Executive Order which cuts the budget of the EPA by one third. Moreover, according to the first preliminary budget under President Trump, science and environmental agencies, especially the EPA and the National Oceanic and Atmospheric Administration are to suffer severe budget cuts in order to increase the country’s defense funds by $54 billion (Greshko, 2017).

Further, President Trump has appointed a Republican lawyer and a climate change sceptic Scott Pruitt as a head of the EPA. In the past Pruitt used to sue the EPA along with the oil and gas lobbyists. To name, he has filed 27-state lawsuit against the CPP (Greshko, 2017). Also, Rick Perry, who is a fossil fuel enthusiast, has been appointed as a head of the U.S. Department of Energy. This appointment means that the department which is meant to be majorly devoted to developing nuclear energy might roll back and focus on electricity generation using fossil fuels. Moreover, the CEO of ExxonMobil, Rex Tillerson, was appointed as the secretary of state (Greshko, 2017). In the light of newly appointed administration mainly consisting of fossil fuel supporters, future of the U.S. involvement in the Paris Agreement is unclear.

In the past, President Trump has argued that the climate change was mainly caused by and is for the China. It is worth mentioning that the U.S.-China partnership between Obama and Xi Jinping on the 2014 joint statement on climate change was an essential part affecting the realization of the Paris Agreement ratification (Nunez, 2017). During Obama’s presidency, the U.S. has made a promise to decrease the amount of greenhouse gas (GHG) emissions by 28% from 2005 levels by 2025 (Nunez, 2017). As for China, the largest GHG emitter has stepped away from using fossil fuels to renewable energy sources. The country has halted the construction of 103 new coal-fired power plants and is planning to invest over $360 billion into the sector of renewable energy by 2020. In the framework of the Paris deal, China is also planning to produce 20% of energy out of renewable energy sources by 2030 (Nunez, 2017). However, the future of the Chinese zeal to fully commit to the agreement is unclear as the pressure of the U.S. to abandon Chinese investments into the fossil fuel sector fade away. Nevertheless, the E.U., India and China have promised to stick to the Paris deal commitment on shifting their economies away from the fossil fuel industry and to reduce the amount of CO2 emissions (BBC, 2017).

Seems like the U.S. history is repeating itself: while Clinton’s administration signed the Kyoto Protocol, predecessor of the Paris Agreement, in 1998, the next U.S. president, George W. Bush refused to ratify and implement the document. The difference is that this time the country have already ratified the agreement, according to which, no country can leave the deal before it completes the four-year withdrawal process. If the U.S. fails to meet its commitments under the agreement, it would be breaking an international law. However, unfortunately, the Paris deal is a non-binding document, which means that President Trump can easily pull off the previous commitments the country has promised to meet while “keeping a sit at the table”.

Greshko, M. (2017). A running list of how Trump is changing the environment. National Geographic.