Department of Religious Studies and Eurasian Research Institute of the Khoca Akhmet Yassawi University Organized International Symposium on Maturidism (Past, Present and Future) in Turkestan on May 4-6th, 2015 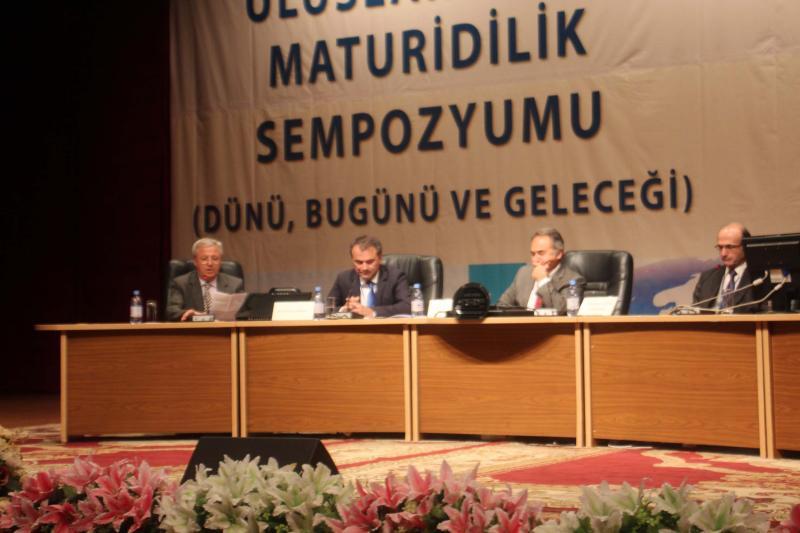 The symposium coordinator, Prof. Dr. Sonmez Mutlu, gave an opening speech. Kutlu in his speech said that Turks have a unique understanding of religion, which is not brought or imported from elsewhere, but is spread to Islamic geography during the historical process, and with this symposium, triplet brothers, Hanafi, Maturidi and Yassawi, have met in Turkestan again. During the opening speeches, representatives of muftiyat from Kazakhstan, Tatarstan and Bashkortostan delivered their congratulatory speeches and expressed the importance of Maturidism for peace and security in Eurasia. The Vice Rector, Prof. Dr. Taljan Raimberdiyev, thanked the participants and said that he hopes the symposium would achieve its targeted goals. The Vice Rector, Assoc. Dr. Mustafa Nursay, in his speech mentioned that this is the first symposium organized in such great level in Kazakhstan on this topic and wished success to participants.
During the symposium, in ten sessions, life of Imam Maturidi, his ideas, works, the establishment of Maturidism, relationship between Hanafi-Maturidi and Yassawi; Karahans, Seljuks, Ottomans and situation of Maturidism in the Turkish states in the modern era have been discussed in detail and the importance of Maturidism in the future of the Turkic world has been demonstrated. Adding to that, the necessity of Maturidism with its rational and civilized viewpoint has been analyzed on ensuring peace and harmony in Central Asia. It is been noted that Maturidism and Hanafi incorporates the root values necessary for the strengthening of a new Islamic culture.
During the symposium, a special attention was given to a role of the mission of the Maturidi School, that is based on views of Imam Maturidi, in identifying the current problems and providing scientific, logical and rational decision-making approaches, as well as strengthening the cooperation and stability between the Eurasian religions, mazhabs and nations. Fundamental philosophy of Maturidi, that favors respect for people and rationality, and its effects on the understanding of Islam in the past, present and future by the Turkic societies was analyzed in detail.
During the symposium a book exhibition was opened on the topic of Imam Maturidi and Maturidism, invited participants of the symposium have donated around 100 books to this exhibition. At the end of the exhibition, these books were submitted to the Akhmet Yassawi University library. With this collection the Akhmet Yassawi University library would become an essential center for research on this topic.
In the closing session, the President of the Board of Trustees of the Akhmet Yassawi University, Prof. Dr. Osman Horata, and the Director of the Eurasian Research Institute, Assoc. Dr. Nevzat Simsek, gave closing speeches of the symposium. Speeches underlined the importance of this symposium for the academic activities of the University and the Institute. In his speech, Prof. Dr. Osman Horata, pointed out the importance of people in the region meeting with their own culture and Hanafi and Maturidism with the following words: “The Central Asian Muslims, besides the pain of the dissociation of faith, were consciously brought to the brink of breaking from their history, culture and faiths. The Central Asian Turkic societies have become a laboratory for social engineering, and are faced with the danger of external attempts, which carry religious and political agenda trying to fulfill the gap created in the last quarter of this century. For this reason, reconnecting and rebuilding the religious identity and the Islam in Central Asia with the Ebu Hanife and Maturidi traditions, which shape the majority of the deeds and faith in Islamic world, should be a priority issue.” The Director of the Eurasian Research Institute, Assoc. Dr. Nevzat Simsek, thanked all of the participants and mentioned that the Eurasian Research Institute is working in accordance with the established mission of the university, aimed at offering scientific solutions for the current various critical issues of the Turkic world by considering the global realities.
After the event, the Eurasian Research Institute of the Akhmet Yassawi University will publish a book on Maturidism in Russian, that will touch upon not only the current Eurasian Turkic people’s problems, but is expected to contribute to the solution of polarization between beliefs and conflicts between mazhabs, and issues which the entire Islamic world is facing.