Dr. Zhenis Kembayev from KIMEP University’s School of Law gave a seminar on the topic of “Regional Integration in Eurasia: Problems and Perspectives”. 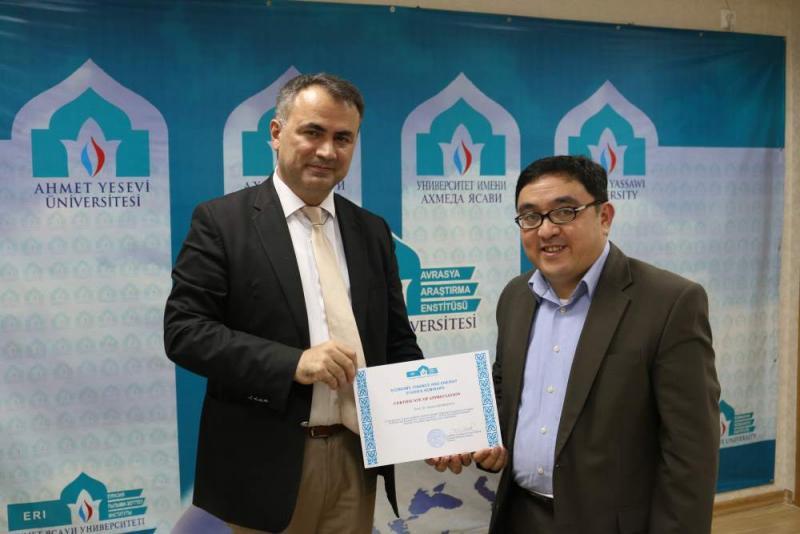 Representing the customs unions as a step towards establishing the economic union, Dr. Zhenis Kembayev explained the process of establishing the economic union by giving an example from the history of the European Union. Noting that in 1968 the customs union was established by the European Union, in 1993 this structure turned into common market and in 1999 into the Economic Union, he added that the integration process had occurred after a long period of negotiations and compromises between countries. Then, referring to the Eurasian Economic Union he stated that the union was still unable to establish a common market because of the continued unification process by conducting negotiations on many issues.

Commenting on the Eurasian Economic Union, Dr. Zhenis Kembayev expressed that the union was managed by Moscow and that it had not been established completely for economic purposes and shared some trade figures between the member countries. According to the professor, among the foreign trade partners of Kazakhstan the European Union takes the first place with 45%, the second is China with 24% and the third is Russia with 22% and in non-energy trade, Russia is the largest trading partner. In addition, he added that the shares of member states of the Eurasian Economic Union Kazakhstan, Belarus, Kyrgyzstan and Armenia in Russia’s total import volume are only 7%.

Expressing that the Eurasian integration was not a new idea and it had always been present, Prof. Kembayev stated that two main objectives of the Commonwealth of Independent States established after the collapse of the Soviet Union were security and economic integration. However, as far as Moldova, Ukraine, Georgia and Azerbaijan were against integration with Russia, in 1995 in order to establish a common market with the countries that will voluntarily take place in the integration Russia, Belarus and Kazakhstan formed the Eurasian Economic Community. He also added that in 2000 with the participation of Kyrgyzstan and Tajikistan the Eurasian Economic Community had been established by signing the founding agreement.

According to Dr. Zhenis Kembayev, to continue political and economic integration between the CIS countries in economic terms the Eurasian Economic Community was established and in political terms in 2002 Collective Security Treaty Organization was established. Although these two structures officially appear as separate structures, they come from a single structure of the CIS. On Kazakhstan’s membership in the Eurasian Economic Union, he noted that in the economic sense the membership was arguable. He expressed the idea that those who consider the subject positively highlighted its advantages in terms of export diversification and those who criticize argued that it could disrupt trade relations with other countries.

At the end of the seminar, participants discussed the topics of Eurasian Economic Union and transition to a common currency.