Junior Research Fellow of the Eurasian Research Institute Aidana Arynbek gave a seminar on the topic of “Constructivism and Russia’s foreign policy in the Caspian Sea region”. 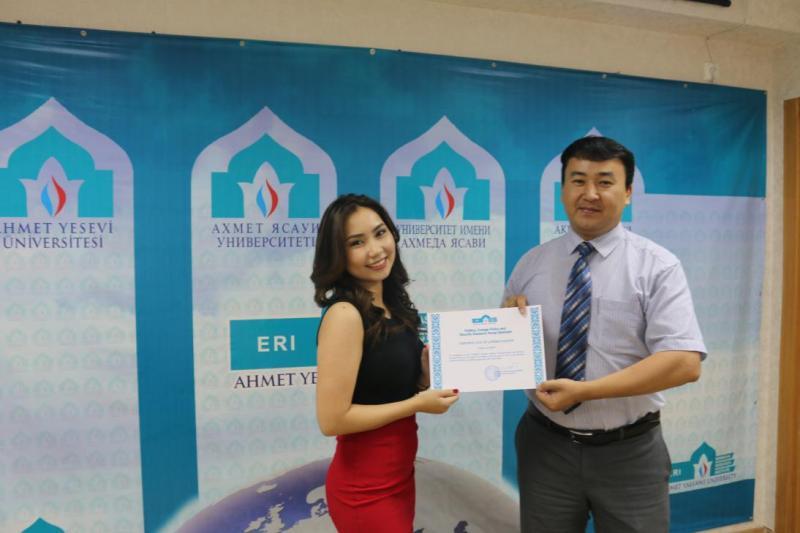 When analyzing a country’s relations with other countries, she stated that neorealism’s balance of power, security and mutual force theories were not sufficient for explaining some current problems. Instead of the theory of material force the focus on the ideas and interests formed toward the country would be more effective in understanding the countries’ attitudes and relationships toward each other.

According to the theory of constructivism, communication in countries relationship determine the direction of the relationship and countries will respond to the friendly and hostile attitude in the same way. During this process as countries are not aware of other countries’ intentions, they identify the countries as enemy, opponent or ally by assessing physical activity made against them.

In the expansion of the definitions of enemy, opponent and allied country in case a country identifes another one as an enemy an arms race will increase and possibility of cooperation between the two countries will be reduced. On the other hand, it was noted that the relationship of competing countries would be more flexible than that of enemy countries. Finally, cooperation in various fields could increase by establishing good relations between the allied countries.

When considering Russia’s foreign policy in the Caspian region from this point of view, she stated that Russia regarded the United States (US) as an enemy, whereas China as an opponent and Iran as an ally. Russia’s opposition to projects such as Baku-Tbilisi-Ceyhan (BTC), Nabucco and Trans-Caspian gas pipeline and its approval of the construction of the Kazakhstan-China pipeline were explained through this concept. Iran is regarded as allied country because of the same objectives and both countries’ opposition to the BTC and Trans-Caspian projects.

At the end of the seminar participants exchanged views on the theory of constructivism and the Caspian region issues.