Junior Research Fellow of the Eurasian Research Institute Zhengizkhan Zhanaltay gave a seminar on the topic of “Developments in Migration and Remittance Flow in Central Asia”. 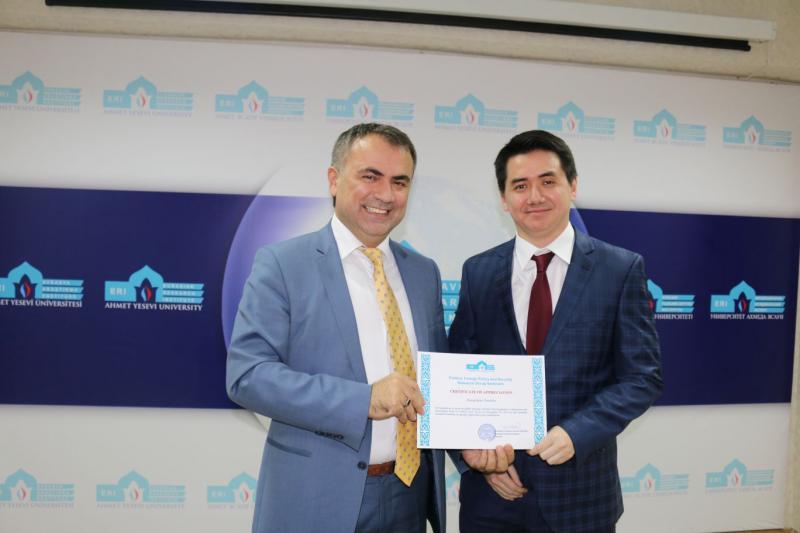 During the seminar Zhengizkhan Zhanaltay talked about the number of labor migrants from Uzbekistan, Kyrgyzstan and Tajikistan migrated to Russia looking for job opportunities, the amount of remittances and migration policies. Talking about labor migrants from Central Asia in Russian labor market, Zhanaltay stated that the procedure for obtaining a work permit had been simplified in 2005. He pointed out that the proportion of migrants from Central Asia among foreign workers in Russia had increased rapidly from 16.9% in 2005 to 63% in 2015. While giving information on the profile of Central Asian migrants to Russia, he added that almost half of the labor migrants from Uzbekistan, Kyrgyzstan and Tajikistan were in the category of unskilled laborers, and that the proportion of high-skilled workers was less than 1%.

He mentioned that as a result of depreciation of ruble against dollar and the economic slowdown in Russia, in 2015 the amount of remittances in terms of dollar value sent to Uzbekistan, Kyrgyzstan and Tajikistan significantly dropped by 57%, 46% and 66% respectively compared to that of 2014. Moreover, he added that the downtrend had continued in the first quarter of 2016 and in the second quarter an increase of around 50% had been observed in all three countries. It was noted that since the May-September period is the most favored period for the migrants from Central Asia to work in seasonal jobs in Russia, there is a significant increase in the remittance flow every year.

In the course of the seminar, he gave information about the current developments in the countries of the region and stated that a quota system based on the active population used by Kazakhstan would be arranged according to the needs of the sectors. He also stated that according to the new changes the procedure for issuing work permits for foreign workers would be speeded up from 30-40 days to 5 days. While giving information about the migration agreement between Russia and Uzbekistan, he mentioned that the process had begun in November 2014 and that Russia was currently reviewing the final draft that Uzbekistan had sent. Regarding Kyrgyzstan, he shared current information about the unified pension system, as well as analyzed the advantages of the Eurasian Economic Association for the Kyrgyz labor migrants.

At the end of the seminar, participants exchanged views on patent prices, changes in quota implementation in Kazakhstan and other issues.