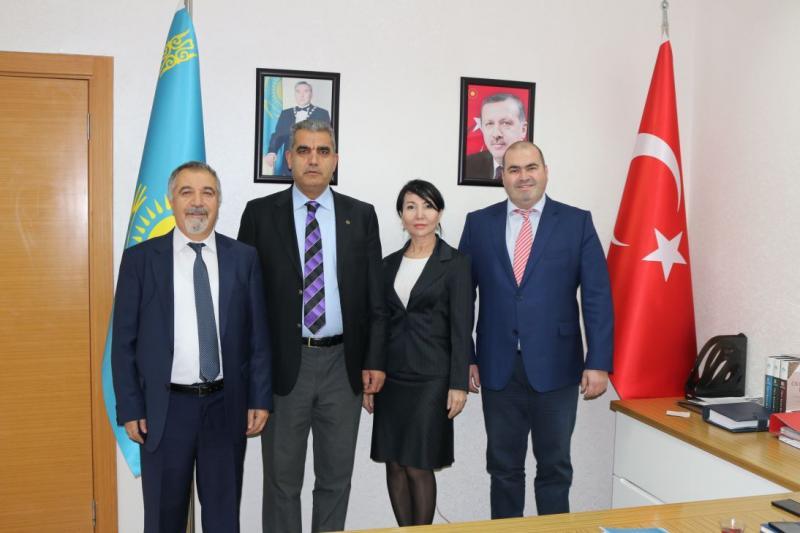 The presentation of the book “The History of Turkish Language” was held at our Institute as part of the visit of Prof. Dr. Ali Akar and Assoc. Prof. Dr. Kenan Koc to Almaty. The meeting began with the opening speech of the Director of the Eurasian Research Institute, Vakur Sumer.

Language as a human system of communication is one of the basic tools of social integration in the social, political, economic, cultural and other spheres of life. Prof. Dr. Kenan Koc said that nowadays there were over 3,000 languages in the world. He also indicated that each community had its own language in history, although some of them had been forgotten over time.

In his speech, Prof. Dr. Ali Akar gave general information about the history and geography of the period covered by the book “The History of Turkish Language”, focusing on the major works published at that time. He also presented bibliographical data on his scientific research. Prof. Dr. Akar emphasized that Turkish was the language that originated from the depths of the centuries, and there were very few languages so widely spread geographically. His research focused mainly on the history and grammar of Turkish language attempting to identify the main sources of the language that has become a written language. He explained that the purpose of the book was to introduce the historical stages of the language and to provide general information about the works of that time and their research. According to Prof. Dr. Akar, this book is useful for those who wish to learn about Turkic Studies.

At the end of the meeting, Prof. Dr. Ali Akar and Assoc. Prof. Dr. Kenan Koc said that Kazakhstan’s transition to the Latin alphabet was very useful for bringing together the Turkic languages and wished success to our Institute.