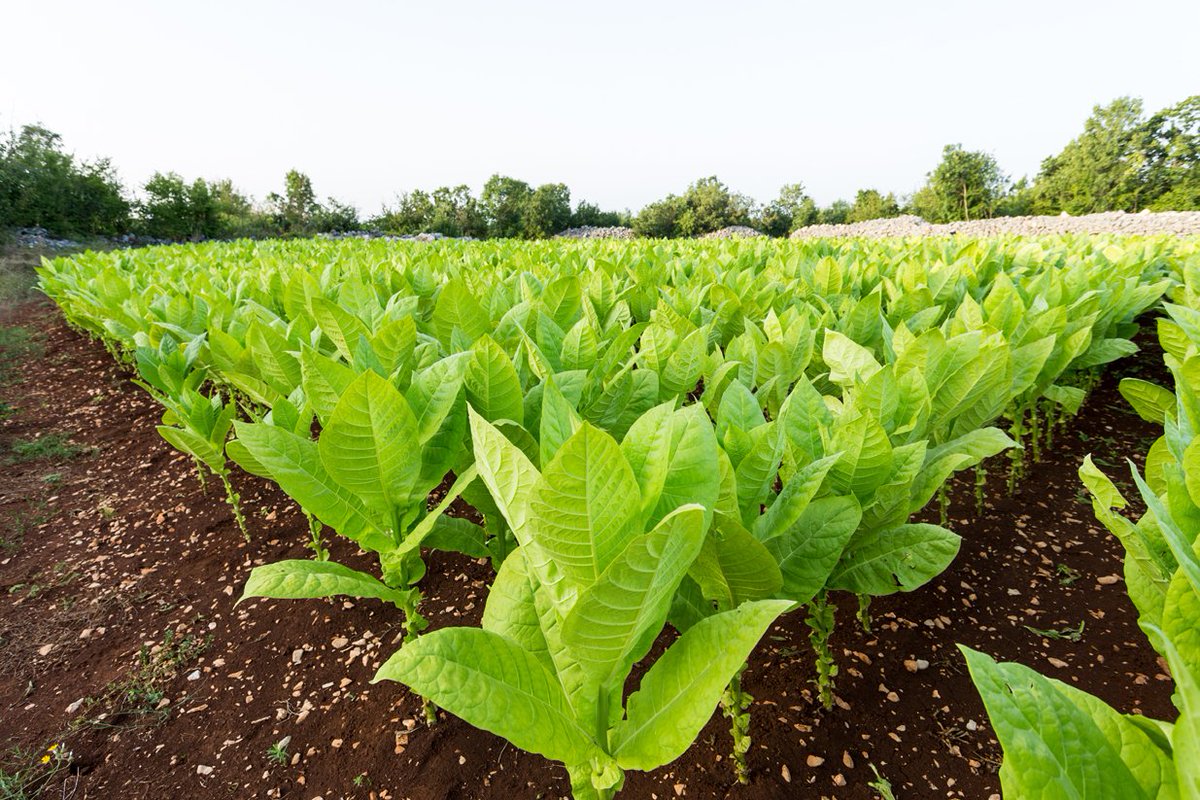 Turkey has been one of the fastest growing economies for several decades despite the recent slowdown and economic crisis. Many sectors of Turkey’s economy experienced significant transformations. Agriculture became one of the most important sectors, which provided not only food security, but also a significant amount of revenues from exports. Therefore, this commentary aims to analyze the agricultural sector of Turkey in terms of production, trade and evolution of policy reforms.

Prior to the 1980-s, the agricultural sector of Turkey was state-centered. The government provided strong support to farmers and state-owned enterprises played a key role. In the following period, the government started to liberalize the sector with introduction of the Structural Adjustment Policies in the 1980-s. This decision was mainly driven by pressure from the international financial institutions such as the International Monetary Fund and the World Bank. Crisis periods of 1994 and 2001 accelerated the process of liberalization. Beside the international financial institutions, the European Union and the World Trade Organization demanded from Turkey to liberalize its agricultural sector, as it was one of the conditions for financial assistance during the crises. As a result, Turkey adopted several laws, which aimed to accelerate the privatization process. These include the 2001 Tobacco Law, the 2001 Sugar Law, the 2006 Agrarian Law and the 2006 Seeds Law. Privatization and liberalization led to important consequences for Turkey’s agriculture. Firstly, large farms and corporations formed jointly with multinationals started to substitute local producers and smallholders. Secondly, opening of Turkey’s market led to intensification of competition from international producers of agricultural and food products. This decision also negatively affected the country’s smallholders, as they had to compete with well-established international agricultural business. Thirdly, significant reduction of state support made millions of farmers leave agriculture and migrate to urban areas [Aydin, 2010].

Transition from state-centered developmentalist and protectionist policies to free market accelerated the process of de-peasantization in Turkey. As a result, new realities of the free market brought to the small farms higher levels of uncertainty about their production and marketing decisions. At the same time, indebtedness of smallholders increased substantially and many of them had to sell their land. However, despite support price policies, subsidies for agricultural inputs, and a protectionist trade regime were abolished, the government did not completely withdraw from the sector. The state continued to support farmers through direct income transfers, input subsidies for the growers of certified vegetables and fruits, deficiency and compensatory payments. For instance, it introduced a new government support package in 2005 for olive growers. Competition and other market forces made the farmers in Turkey change their strategies. Farmers responded by product diversification, compliance with quality standards, and looking for product placement in niche markets [Keyder and Yenal, 2011].

It is important to note that reduction of state support substantially affected the production of certain products. For instance, liberalization of the tobacco market led to significant decline of both production and area harvested (Figure 1). Production of unmanufactured tobacco shows a long-term declining trend. It peaked in 1993 reaching almost 339 thousand tons. In 2019, production decreased to 70 thousand tons. At the same time, area harvested for tobacco declined from 320 thousand hectares in 1990 to 81 thousand hectares in 2019. 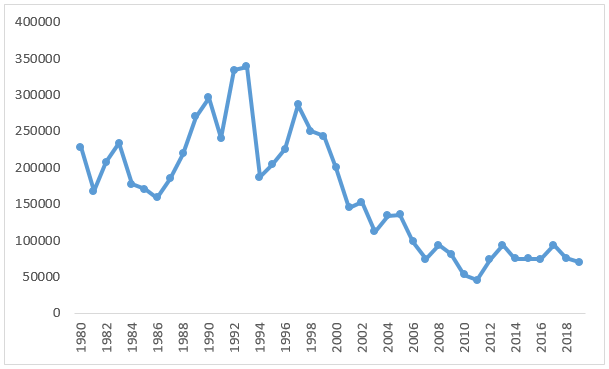 Source: The Author’s compilation based on the FAOSTAT (2021) data.

Production of other vegetables also demonstrates positive tendencies. Tomatoes remain one of the most important vegetables produced in Turkey that have export significance. Volumes of tomato production increased substantially. While in 1980 the production amounted to 3.55 million tons, in 2019 it increased to 12.8 million tons (Figure 3). For the same period, the harvested area for tomatoes grew from 108 to 181.5 thousand hectares. 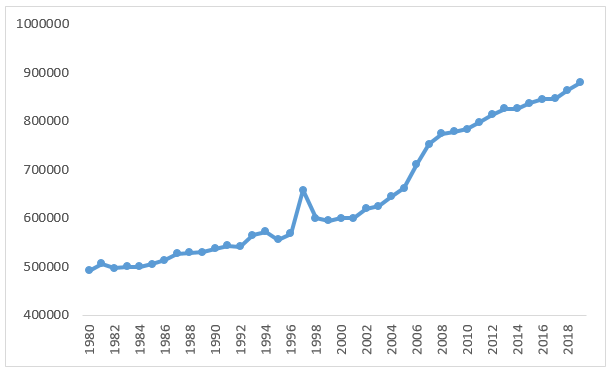 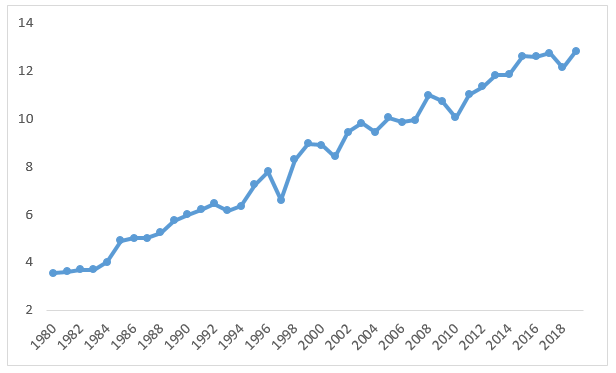 Source: The Author’s compilation based on the FAOSTAT (2021) data.

Additional feature of the transformation of agriculture in Turkey is the expansion of supermarkets. However, small-scale producers cannot readily meet the quality, consistency, volume and sorting–packaging–transportation requirements of supermarkets. Therefore, they could not benefit from new trade opportunities. To facilitate smallholders’ participation in the supply chain, the government restructured wholesale markets, formerly state-led agricultural sales co-operatives, and producers’ unions into ‘joint – stock company’–like private organizations [Atasoy, 2013].

Later studies on development of smallholdings in Turkey show promising results. Despite the number of people living in villages in Turkey declined massively, the number of smallholdings did not. Moreover, small peasant farms remain the main feature of villages and the peasant families still comprise the main part of the rural population. It is important to note that active engagement in labor relations outside the farm helps to maintain the peasant production. Therefore, new peasantry emerged in Turkey [Öztürk et al., 2018]. Despite lack of state support, the smallholders have many advantages. Their production is vital for the country’s food security. Development of smallholders can contribute to poverty alleviation in Turkey. Moreover, traditional agricultural knowledge is crucial for modern agriculture. Many farmers in Turkey express the significance of traditional knowledge in their agricultural practices. They inherited this knowledge from their elderly and kept it with pride and dignity. According to farmers, this knowledge helped them to overcome problems associated with agricultural production through solutions that are in harmony with nature [Aksoy and Öz, 2020].

Therefore, market-led reforms significantly transformed the agricultural sector of Turkey. At the same time, the government was able to use these changes to diversify production of agricultural goods. Agriculture remains an important source of export revenues. Turkey’s government should re-evaluate its policy towards smallholders, as they remain crucial for food security and poverty alleviation. Moreover, they are an important source of agricultural knowledge. Studying Turkey’s experience can be beneficial for countries of Central Asia, which are currently seeking alternative development models and consider agriculture as one of the growth drivers.