According to the Ministry of Economy of Kazakhstan, this agreement will bring huge benefits to the economy of Kazakhstan facilitating the access to the Iranian market for domestic producers. The interim agreement makes it much easier to export to Iran such goods as beef and lamb, chickpeas, lentils, peas, barley, maize, vegetable oil and others. According to the ministry, there is a positive dynamics of mutual trade between Kazakhstan and Iran, which for the first quarter of 2018 grew by 70% compared to the same period in 2017, amounting to more than $170 million (informburo.kz, 2018). The signing of the agreement can be considered as a step further in the process that began long ago. Iran was interested in strengthening trade cooperation with Russia as well as with other EEU members since the very beginning of the integrational process and the free trade agreement was one of the most probable outcomes. In December of 2016, for instance, President Rouhani paid visits to Russia, Armenia, Kyrgyzstan and Kazakhstan and signed a number of documents covering issues of bilateral cooperation.

Iran is indeed a huge market with a GDP of $425 billion, which is more than three times as large as of that of Kazakhstan, and with a population exceeding 80 million people. The trade turnover between Iran and Kazakhstan has been declining over the last 3 years and was only $552.6 million in 2017. However, during the first quarter of 2018 the amount of bilateral trade has grown by 71% compared to the same period of 2017. The absolute figures of trade might sound misleading unless we compare them with trade relations with other countries. In 2017, the trade between Kazakhstan and Iran was at $552.6 million, which accounted for only 0.7% of the total foreign trade of Kazakhstan. If to take into account the GDP size of Iran, geographical proximity and the fact that the two countries share maritime traffic through the Caspian Sea, the bilateral trade amount is negligibly small. To compare with, the trade turnover between Kazakhstan and Vietnam is 542.7 million, which is almost equal to the bilateral trade with Iran. However, Iran is located much closer to Kazakhstan and its GDP is 2.25 time higher than that of Vietnam. The primary reason that explains the boosting trade with Vietnam is the free trade agreement between the EEU and Kazakhstan, which was first signed in 2015. Since then, the amount of trade between Kazakhstan and Vietnam increased 26 times. Moreover, Kazakhstan’s current account with both Vietnam and Iran is strictly positive meaning that exports exceed imports.

Figure 1 a) above shows the industrial exports of Kazakhstan to Vietnam prior to signing the free trade agreement and after structure. The industries are indicated according to the Standard International Trade Classification (SITC) at four-digit level of disaggregation, which is also accepted by the Eurasian Commission (eurasiancommission.org-b, 2018). As we can observe, in 2014 the exports to Vietnam were extremely concentrated with almost three thirds of it accounting for asbestos exports. After a tremendous growth of exports in 2015 and 2016, we can see that in 2017 the structure of the exports did not change very much in terms of proportions. In both cases, few industries accounted for over 95% of the total exports of Kazakhstan to Vietnam. The same can be said about Iran if we look at Figure 1 b). Thus, in 2014, only seven commodity categories made more than 97% of the total exports to Iran and the same is true for 2017. In other words, despite of huge differences in the amount of exports of Kazakhstan to Vietnam and Iran, the sectorial structure of exports did not change and only few industries accounted for more than 95% of them.

The difference of export growth to Vietnam and Iran can be seen contrasting the Figures 2 a) and b) below. The red line is the Herfindahl-Hirschman Index (Herfindahl, 1950; Hirschman, 1964) that shows the degree of industrial concentration of exports. It is interesting to note that the boosting exports of Kazakhstan to Vietnam during 2016-2017 did not contribute to the diversity of exports. Moreover, we can’t see any strong correlation between the diversity of exports between 2011 and 2017 neither in case of Vietnam nor in that of Iran. 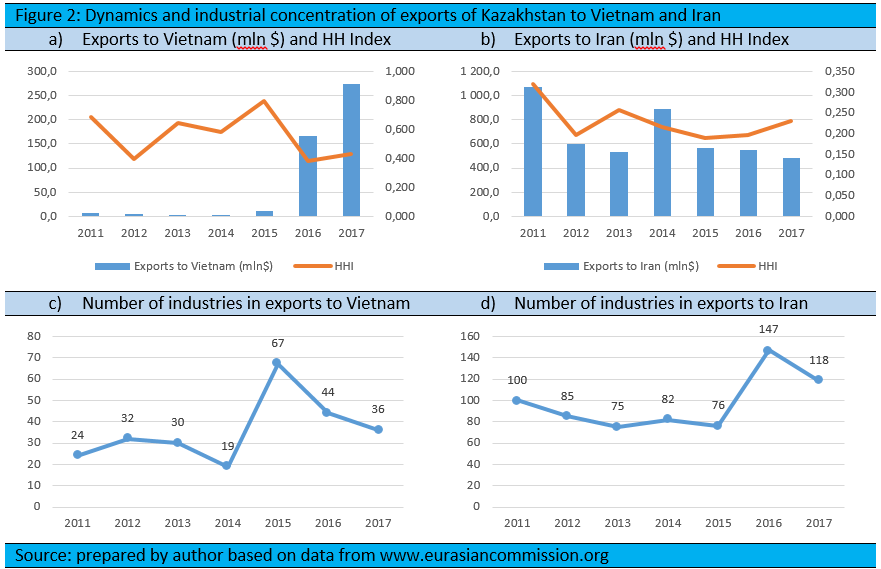 Informburo.kz (2018): “In Astana, the EEA and Iran signed an agreement on the creation of a free trade zone” retrieved from: https://informburo.kz/novosti/v-astane-eaes-i-iran-podpisali-soglashenie-o-sozdanii-zony-svobodnoy-torgovli.html accessed on 19.05.2018.