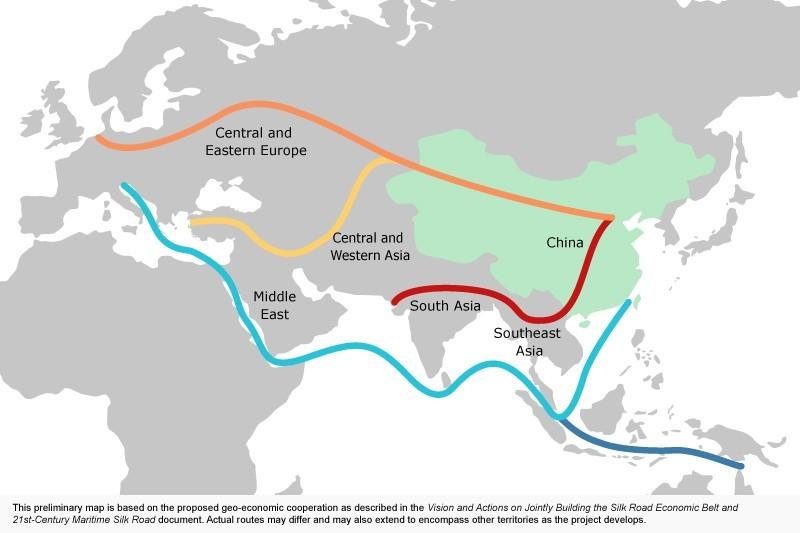 As it shown in Figure 1, the Belt and Road project runs through 5 routes shaped in order to connect the continents of Asia, Europe and Africa. For instance, the Silk Road Economic Belt focusses on: (1) linking China to Europe through Central Asia and Russia; (2) connecting China with the Middle East through Central Asia; and (3) bringing together China and Southeast Asia, South Asia and the Indian Ocean. On the other hand, the 21st Century Maritime Silk Road focusses on using Chinese coastal ports to: (4) link China with Europe through the South China Sea and Indian Ocean; and (5) connect China with the South Pacific Ocean through the South China Sea (Hong Kong Trade Development Council, 2016).

It should be also mentioned that one of the reasons for the Belt and Road Initiative’s launching was Beijing’s intention to encourage Chinese firms to go overseas searching new markets or investment opportunities. In this regard, the Chinese governmental bodies focused on providing guidance and advice for domestic companies on doing business in the Belt and Road countries strongly advising to familiarize with a brief introduction to their investment and business environment.

According to the preliminary maps published by the official sources in China, the Belt and Road includes up to 60 countries, which cover the area of the ancient Silk Road. However, not all of them have political and economic stability. Since the Belt and Road range from Sri-Lanka to Syria, any Chinese company planning to trade with or invest in the country along the Belt and Road could face with various challenges, which may prevent China from expanding its influence abroad. Moreover, financial institutions such as $40 billion Silk Road Fund, which was established to provide a direct support to the Belt and Road Initiatives, so as the Asian Infrastructure Investment Bank, which was spearheaded by China, should be cognizant of the range of credit risks present in the Belt and Road countries (Economist Intelligence Unit, 2015). Therefore, the exploration of the possible risks and threats that could negatively affect the Belt and Road Initiative developments has become even more significant.

It is obvious that the Belt and Road countries vary dramatically on the issue of potential operational and credit risks. According to the risk assessment report, made by the Economist Intelligence Unit, which scored risks across ten different categories, including security, legal and regulatory, government effectiveness, political instability, tax policy, labour market, foreign trade & payments, financial, macroeconomic and infrastructure, Afghanistan and Iraq, which are beset by conflict, score the highest with regards to overall risk. However, as it shown in Figure 2, the Central Asian countries such as Tajikistan and Uzbekistan, where the Belt and Road push is likely to be strong, are very close behind. (Economist Intelligence Unit, 2015)

It should be highlighted that Beijing considers the policy coordination between countries along the Belt and Road as an important guarantee for implementing the Silk Road Economic Belt and 21st Century Maritime Silk Road Initiatives. It is obvious that without enhancing high degree of mutual political trust it is impossible to fully coordinate the implementation of practical cooperation and large-scale projects within the framework of the Belt and Road Initiative. Taking into account the fact that the Initiative member states have various forms of government and specific features of political systems there is an essential need for the Chinese authorities to build a multi-level intergovernmental communication mechanism (National Development and Reform Comission, 2015), which would reduce political risks and help to avoid failure in attaining the goals that were set in the Belt and Road Initiative.

Therefore, the political risks scenario analysis become an integral part of the preparatory process for the Initiative implementation. There are various political risks scenario analyses performed by different research institutions such as the EIU. For instance, Kazakhstan’s political stability risks assessments include various scenarios reflecting political changes in the country in case of transfer of power and the first change in political leadership since Kazakhstan gaining its independent in 1991. The main aim of aforementioned scenarios is to understand will the newly elected leader of the country provide the proper level of governmental support required for large-scaled projects implemented in the framework of the Silk Road Economic Belt.

Actually, Kazakhstan has been the biggest recipient of Chinese foreign direct investment (FDI) in the former Soviet Union, receiving a total of $22 billion in investment from 1991-2013. As of the end of 2014, China’s total stock of FDI to Kazakhstan exceeded $7.5 billion. Moreover, new packages of economic deals totaling $14 billion and $23 billion were unveiled in December 2014 and in March 2015 respectively. (Hong Kong Trade Development Council, 2015) Therefore, it is quite important for Beijing to minimize political risks and protect its overseas direct investment having governments’ guarantee that they will not change the outcome of a previously signed agreements.

In conclusion, it is clear that without proper evaluation of possible operational risk over the Belt and Road initiative implementation it would be impossible for Chinese side (governmental bodies or private companies) to ensure good business planning process. For instance, despite the fact that at the official level all Central Asian countries welcome China’s the Silk Road Economic Belt proposal, there are some economic and political concerns as well. Actually, political elites and security experts in much of Central Asia are aware that China’s growing economic presence can lead to Chinese dominance or interference in regional affairs. (Lain, 2014) Therefore, even strong financial support of the Silk Road Initiative proposed by Chinese President Xi Jinping could not guarantee successful implementation of the project, especially, in the countries with high operational risks.

Economist Intelligence Unit. (2015). Prospects and Challenges on China’s “One Belt, One Road”: a Risk Assessment Report. Retrieved from http://www.eiu.com/Handlers/WhitepaperHandler.ashx?fi=One-Belt-One-Road-…