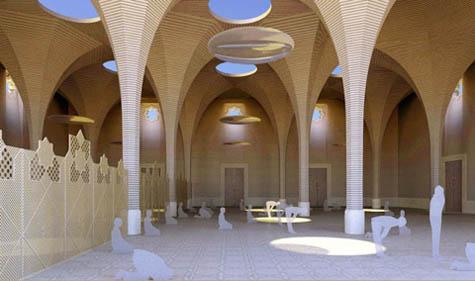 Religion can interact with the new realities, “challengers” as we often say, social and scientific processes, as well as create new meanings and correct personal and social beliefs. Religion can contribute to the solution of today’s social problems, such as environmental, act as an incentive for the development of education, which “seeks to be faithful to the religious traditions, values, and ethics of religions, as well as display the transforming power of the faith.” [i]

The fusion of religious and environmental movements has become an effective strategy for the ecological development in the 21st century. In the last three decades, faith communities have stepped up their activities in the environmental sphere. People of faith, who often stood at the forefront of battles for human justice, are now reclaiming their roles as guardians of Earth and advocates for its well-being.

Muslims are also concerned about the health and welfare of Earth, like the rest of its inhabitants. The teachings of Islam do not contradict, but on the contrary, demonstrate the relevance of the use of traditional resources and institutions in addressing one of the biggest challenges facing humanity – the health of our planet.

At the end of the XX century, the term “sustainable development” became widespread; it refers to the socio-economic and environmental development, aimed at the reasonable satisfaction of human needs while improving the quality of life of present and future generations, peacekeeping, the careful use of the planet’s resources and environmental conservation. As it turns out, sustainable development, and the environmentalism, social, environmental movement that spread in the XX century in the European countries, aimed at strengthening the protection of environmental measures, could be harmonious part of the religious consciousness, without breaking, but on the contrary, supporting the basic tenets and values of religion. To think about the world and take care of its preservation are the duties of the believer.

Evangelical environmentalism is an environmental movement in the United States in which some Evangelicals have emphasized biblical mandates concerning humanity’s role as steward and subsequent responsibility for the caretaking of Creation. While the movement is focused on different environmental issues, it is best known for its focus on addressing climate action from a biblically grounded theological perspective.

Proper human perception of his/her position in the universe and the fair treatment of the outside world are of great importance for the formation of a Muslim identity. Islam views the environment as a source of human livelihood, for which he/she is responsible. In dozens of Quranic verses, there is a call to reflect on the natural phenomena, to study the relationship between living organisms and the environment. Every element in nature is connected with the other elements, and the man as one of the species is inextricably linked with the environment. The Quran emphasizes the need for rational interaction between man and nature because only in this case, progressive development of society is possible. A man has no right to destroy the world he did not create. Sharia laws limit the intervention in nature, protect forests from destruction, sources of drinking water and the air – from pollution, and ecosystem – from the death and destruction. [ii] Careful attitude towards the environment is a part of the Muslim culture.

Environmental pollution and the depletion of our planet’s resources are fabricated, and therefore, Islam sees the solution to these problems in a significant regulation of human activities, the formation of value-oriented ecological culture. In this regard, environmental education is of particular importance. Humanity must compensate its impact on the environment, and the Quran imposes on human responsibility for everything that happens to him/her and around him/her, including – for the restoration of his/her habitat. [ii]

Over the past three decades, the religious communities have intensified their activities in the field of environmental protection. It is in this context that a relatively new phenomenon as ecotheology has appeared. Ecotheology is a form of constructive theology that focuses on the relationship between religion and nature, especially in the light of environmental concerns. Ecotheology usually comes from the fact that there is a link between human religious/spiritual views and degradation of nature. The movement implements numerous religious and environmental projects around the world. It is important to bear in mind that ecotheology seeks not only to identify known problems in the relationship between nature and religion but also to identify possible solutions. This is particularly important, as many supporters and members of the movement say that only science and education are not sufficient to cause radical changes needed in our current environmental crisis.

By 1990, many religious scholars, scientists initiated discussions and studies; they generated a significant amount of scientific literature with an analysis of the place of nature in various religious systems. A landmark event was a series of ten conferences on religion and ecology, organized by Yale University professor Mary Evelyn Tucker and John Grim, and held in the University Center for the Study of World Religions at Harvard from 1996 to 1998.[iii] Over 800 international scientists, religious leaders, and environmentalists have participated a series of conferences. Conference papers were published in a series of ten books “World Religions and Ecology,” one for each of the world’s major religious traditions. Based on these conferences, later Tucker and Grim formed the Yale Forum on Religion and Ecology that was instrumental in the creation of science, shaping environmental policy, as well as “greening” of religion. It is still the largest international multi-religious project. [iv]

Active religious and environmental group was established in the American Academy of Religion in 1991, and a growing number of universities in North America and around the world now offer courses on religion and the environment. Recent studies in religion and ecology can be found in the peer-reviewed journal “Worldviews: world religions, culture, ecology” in reference works, such as encyclopedias. Another landmark in the new field was the publication of “Encyclopedia of Religion and Nature” in 2005, edited by Bron Taylor. Taylor also headed the International Society for the Study of Religion, Nature, and Culture, which was established in 2006 and began publishing a quarterly magazine for the Study of Religion, Nature, and Culture in 2007.

The interest that emerges in the Islamic community in the environment is reflected in the steady growth of the “green” movement among Muslims around the world. Based on eco-ethics of Islam, these “green” Muslims have launched eco-Islamic projects in cities in Canada and England, to protect forests in the Philippines and Malaysia and the coral reefs of Zanzibar. Scientists and environmental activists have begun to develop educational strategies to revive the environmental teachings and practices of Islam. They participate in the formation of eco-ethics of Islam and the development of teaching materials for the introduction of eco-ethics in a rich educational environment of the Muslim world: traditional Islamic institutions, Islamic schools, and universities, as well as in a variety of formal and informal training programs offered by educational bodies. [i]

The mosque is one of the most visible symbols of Islam. It serves a multifaceted role in the life of a Muslim – and as a place of prayer and meditation, and as a center of religious learning and political debate, as well as a safe place to shelter. Some scholars emphasize the important role of mosques for eco-Islamic activities throughout the Muslim world as an educational center and perfectly appropriate places for holding information sessions and community discussions on environmental issues.

Another opportunity to introduce environmental teachings of Islam through mosques is the construction and upkeep of the mosque. In this connection, it may be mentioned that an eco-mosque is based in the historic university city of Cambridge, with natural light throughout the year, thanks to the huge light hatches in the dome. For heating and cooling, it is planned to use geothermal heat pumps, energy-saving technology and green roofs that will give near-zero carbon footprint. [v]

To spread environmental awareness mosques should play a key role as a tool of continuous education in the Muslim society. The activities of international aid agencies and the development of “Muslim Hands” aimed at the development of environmental training programs for their schools around the world, combining the expertise of local professionals with innovative teaching materials on the protection of the environment. And in South Africa, the Muslim students take an active part in the annual ecological initiative to care for the school environment, as well as participating in the national program of green schools, the annual Muslim school gardening competition which encourages schools and students to participate in tree-planting and support gardening in some municipalities. Islamic boarding schools in Indonesia are actively engaged in environmental Islamic activities practically participating in nature conservation: preserving rivers, buffer zones around sensitive areas.

Islam and Ecology Center was established at the University of Wales. It is assumed that based on the center initiative, theological and legal handbooks, educational resources, training on practical environmental programs will be established, and the profile of eco-Islam on a global level will raise. However, the most famous one was the eco-Islamic initiative in Zanzibar. Draft of environmental ethics that protects the maritime space and the environment of the Misali island is a partnership between several international organizations, which resulted in the book-guide developed for the teacher of Islamic Environmental Education, it is used in teaching environmental ethics of Muslims.

Other learning opportunities, both formal and informal, such as conferences, lectures, workshops and seminars, voluntary movements, the media and social movements are also used by eco-activists of Islam. Growing eco-Islamic movement confirms that concern for the environment is a religious duty, an act of spiritual obedience, and requires measures to correct environmental policies.

The introduction of modern social problems, such as environmental issues, can be an incentive for the transformation of religious education in Kazakhstan by implementing a holistic approach to knowledge, increasing the relevance of religious understanding of contemporary problems and promoting of social activity of students by applying the teachings of Islam in their lives and the life of society.

Living in justice to people and the planet is necessary for every Muslim. This shows, in words and deeds that the educational space of Islam remains a vital resource for the modern environmental movement. Therefore, the synthesis of Ecology and Religion is possible. Religion can be, even has to be useful in solving the environmental crisis, consolidating the moral resources, successfully bringing the faithful beyond the selfishness and materialism, stressing the sanctity and order of nature, defining the place of humanity in it.