As an energy-rich developing country, Kazakhstan is deeply concerned over its ability to provide sufficient energy supply for sustainable economic growth. Kazakhstan’s energy mix is still dominated by fossil fuels. (Karatayev & Clarke, 2014) According to the Kazakhstan Electricity Grid Operating Company (KEGOC), in 2015 the lion share or 81.6% of electricity produced in Kazakhstan was generated from coal. Hydro and gas rank 2nd and 3rd in the total electricity generation of the country accounting for 10.2% and 8%, respectively. Finally, renewable and alternative energy sources (RES) such as wind and solar accounted for 0.14% and 0.05%, respectively. (KEGOC, 2016) According to the International Energy Agency (IEA), the share of the thermal power plants, which are located in the Kazakhstani industrial north near largest coalmines, in the gross electricity production had never fallen below 75%. (Fig. 1)

Figure 1. Electricity production in Kazakhstan by fuels in 1990-2014 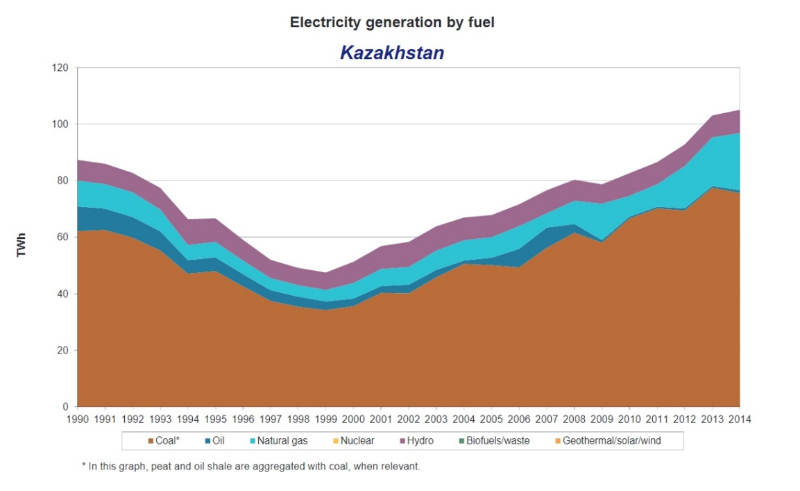 Rapid economic growth in the past decade has led to a sharp increase in electricity consumption (World BankGroup, 2014). The total annual power generation in Kazakhstan has increased from 47.5 billion kWh in 1999 to 90.8 billion kWh in 2015. (Fig. 2) It should be admitted that as of January 1, 2016, the total installed capacity of electricity generation in Kazakhstan was about 21.3 GW, while the available capacity reached about 17.5 GW[1]. (KEGOC, 2016) The industrial sector currently accounts for approximately 70% of the total end-use electricity consumption, while the residential sector, the commercial and service sectors cumulatively, transport and agriculture account for 10%, 9%, 6% and 2%, respectively.

Source: Committee on Statistic of Kazakhstan

The recent reduction in electricity production closely related to a general decline in rates of the economic development of Kazakhstan caused by low oil prices and Russia’s economic recession. As a result of the slowdown in economic activity, the Kazakhstani larger institutional and commercial consumers of electricity had to decrease their energy consumption, in particular, Sokolov-Sarbai Mining Production Association, Kazphosphate LLC, and Kazakhmys Corporation decreased their electricity consumption by 24.3%, 9.2% and 3.2%, respectively.

However, the electricity generation decline had bypassed the renewable energy sources facilities including hydropower stations. (Fig. 3) In 2015 the amount of electricity generated by renewable energy sources increased by 22% to 0.704 billion kWh. As of January 1, 2016, the number of the RES facilities in the country amounted to 48 with the total installed capacity of 251.55 MW, which is 96.6% increase year-on-year. The installed capacity of the RES reached over 127.9 MW in 2015.

Actually, the Kazakhstani authorities are looking forward to increasing the installed capacity of the RES in total energy generation of the country. Kazakhstan intends to update and develop much of its infrastructure over the coming 20 years by implementing green technologies. More importantly, there is a strong political momentum to move towards the green economy. For instance, Kazakhstan-2050 Strategy and other strategic program documents declared ambitious goals to achieve 50% share of alternative and renewable energy by 2050 in its power generation sector. Kazakhstan is the first Central Asian state, which started to develop policies that contribute to transitioning to a low-carbon economy focusing on implementation of the renewable and alternative energy sources such as solar, wind, water and geothermal heat.

Adopted in 2009, the Law on the Support of Renewable Energy has established the legal basis for promoting the use of renewable energy sources for gross electricity and heat production in Kazakhstan. In particular, the Law provides investment preferences for implementation of the renewable energy projects, establishes strategic priorities that would facilitate the transition to green energy. In accordance with the Concept for Transition of Kazakhstan to Green Economy approved in 2013 the share of alternative energy sources in total Kazakhstan’s energy consumption should have reached more than 3% by 2020 rising to 30% by 2030 and 50% by 2050. In accordance with the Green Economy Concept, up to 50% of investments that is to be allocated in the energy sector in the amount of around $50 billion by 2030 and around $100 billion by 2050 would be assigned to renewable and alternative energy. (Concept for Transition of Kazakhstan to Green Economy, 2013)

In conclusion, it should be admitted that according to estimates by the Minister of Energy, Kazakhstan has established a significant electrical energy reserve amounted to 22-23% of the maximum load of the system. (The Prime Minister of Kazakhstan, 2015) Moreover, the Ministry is working on launching a number of large energy projects such as the construction of the Balkhash TPP, reconstruction of the Ekibastuz GRES-2 and modernization of Shardara HPP, which would definitely strengthen the capacity of the electric power industry and ensure the growth of the Kazakhstani economy until 2022.

Moreover, surplus electricity capacity provides the opportunity for Kazakhstan to increase the reliability of electricity export, which is correlated with Astana’s intention to establish a common market of electricity within the framework of the Eurasian Economic Union in 2019. However, the Government should guarantee stable internal demand for electricity in order to prevent energy generation sector from stagnation.

Concept for Transition of Kazakhstan to Green Economy. (2013). Decree of the President of the Republic of Kazakhstan dated February 20, 2013. Astana.

KOREM. (2016). Report on the results of monitoring electric energy market and centralized bidding for 9 months of 2016. Astana.