According to the latest demographic data published by the Statistics Committee of the Kazakh Ministry of National Economy, by July 1, 2019, the population of Kazakhstan reached 18,507,942 people, which is 0.61% higher than at the beginning of the year. Out of 17 regions of the country, only five experienced a population decline during the first seven months of 2019, while the rest recorded a population growth. Overall, there are six regions of Kazakhstan that tend to have declining demographic trends, which is contrary to the nationwide pattern of demographic growth. The Karagandy region is one of them, along with the East Kazakhstan, Kostanay, Pavlodar, Akmola, and North Kazakhstan regions.

At the same time, among the abovementioned regions, the Karagandy region can be considered as a special case in terms of geography and demography. Being the largest region in terms of land area (427,982 sq. km), it is also the only region of Kazakhstan without any international borders. It has the highest share of the urban population of 79.6% (1,096,819 people), while overall in Kazakhstan the urbanization rate is only 58.3% [World Bank, 2017]. One of the factors explaining the high rate of urbanization in the region is that most of its territory, except for the northern part, is not suitable for common types of agricultural activities due to harsh continental climate and small amount of precipitation, which do not exceed 300 mm per year [Statistics Committee, 2004]. 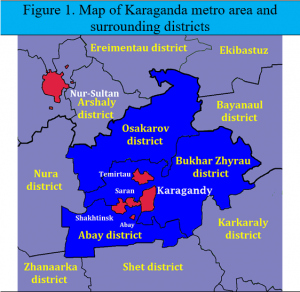 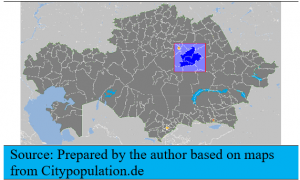 However, one of the facts that make the Karagandy region highly important in terms of demographics is the agglomeration around the city of Karagandy. Unlike other large urban areas, which are basically one large single city surrounded by rural communities, it is a large urban agglomeration consisting of several urban settlements, including the city of Karagandy itself (497,906 people), Temirtau (186,216), Shakhtinsk (57,162 people), Saran (52,008 people), Abay (28,365) and other smaller settlements in close vicinity. The combined population of the agglomeration is over 820,000 people, which is nearly 60% of the region’s population. However, since recently the city of Karagandy with its surrounding agglomeration has shown signs of the reversal of its moderate growth trend that began in mid-2000s. Thus, the 2019 statistics registered the first population decline in the Karagandy city since 2003. After two years of staying above a symbolic threshold of 500,000 people in 2017 and 2018, it dropped again below that level to 497,906 people by the beginning of 2019. The demographics of the surrounding urban settlements followed a similar trend with the growth rates approaching 0%. It is noteworthy to mention that the recent demographic cycle of the city of Karagandy nearly matched the current demographic growth of Kazakhstan that began in 2003 [UN, 2013].

The demographic trend of the Karagandy agglomeration is not limited to its metro area and extends to the nearby districts. In general, when counting the population of the cities inside the Karagandy agglomeration jointly with the corresponding districts they are located in, we can note that throughout most of the period since 1979 the entire area adjacent to the agglomeration had extremely negative demographic dynamics. This is especially true for the Bukhar-Zhyrau and Abay districts that surround all the elements of the agglomeration. The two districts have lost 195,628 people, which is more than any other of all 175 administrative districts of Kazakhstan during 1989 and 2019. In general, the population decline in the Bukhar-Zhyrau, Abay and Osakarov districts was far above the country’s average, and they often were at the extreme bottom of the district level ranking.

Yet another reason explaining the slow growth of the Karagandy agglomeration might be the nearby presence of another (and more powerful) urban center of Nur-Sultan. A relatively small distance (212 km) to this massive urban area and the country’s capital might be a factor that limits the growth of the smaller Karagandy urban area as the majority of rural migrants from the surrounding areas are attracted to the capital. We can note that between 1999 and 2019 the population of Nur-Sultan nearly tripled almost entirely due to internal migration from other regions of Kazakhstan. However, without necessary data it is extremely difficult to single out the share of rural migrants that moved to Nur-Sultan instead of Karagandy. We also have to admit that economic factors such as the industrial specialization of urban areas, labor productivity differences, human capital and others are the ones that determine the growth of the cities [Storper, 2008]. Moreover, unlike the southern regions of Kazakhstan, the Karagandy agglomeration, as well as its surroundings, did not attract very much external migrants mainly consisting of repatriates during the 1990s and early 2000s [UN, 2013].

Within the general demographic framework of Kazakhstan characterized by rapid urbanization and population growth in big cities and large urban areas, the sluggish growth of the Karagandy agglomeration is a rather unusual and unexpected case. Once a metro area expected to reach a milestone of one million people in a couple of decades into the 21st century, it did not even recover its population size of 1989. Moreover, in 2019, after more than a decade of a moderate growth, it returns to showing signs of population stagnation or even decline. Interestingly, it turns out that apart from basic demographic factors that are similar with the northern and eastern parts of Kazakhstan, a very low share of the rural population around the Karagandy agglomeration is one of the factors that limits the growth of its demographics.

Citypopulation.de (2019). The population of all Kazakh cities, urban and rural settlements with more than 20,000 inhabitants according to census results and latest official estimates. Retrieved from https://www.citypopulation.de/Kazakhstan-Cities.html. Accessed on 22.10.2019.

Statistics Committee of the Ministry of National Economy of Kazakhstan (2019). Summary of the 1999 Census in the Republic of Kazakhstan. Retrieved from http://old.stat.gov.kz. Accessed on 24.10.2019.

Statistics Committee of the Ministry of National Economy of Kazakhstan (2004). Regions of Kazakhstan-2004. Retrieved from http://old.stat.gov.kz. Accessed on 25.10.2019.

Storper, Michael (2008). Why Does a City Grow? Specialization, Human Capital, or Institutions? Retrieved from https://hal-sciencespo.archives-ouvertes.fr/hal-01023792/document. Accessed on 22.10.2019.

World Bank (2017). Cities in Eastern Europe and Central Asia: A Story of Urban Growth and Decline. Retrieved from https://www.worldbank.org/en/news/feature/2017/11/30/cities-in-eastern-europe-and-central-asia. Accessed on 20.10.2019.