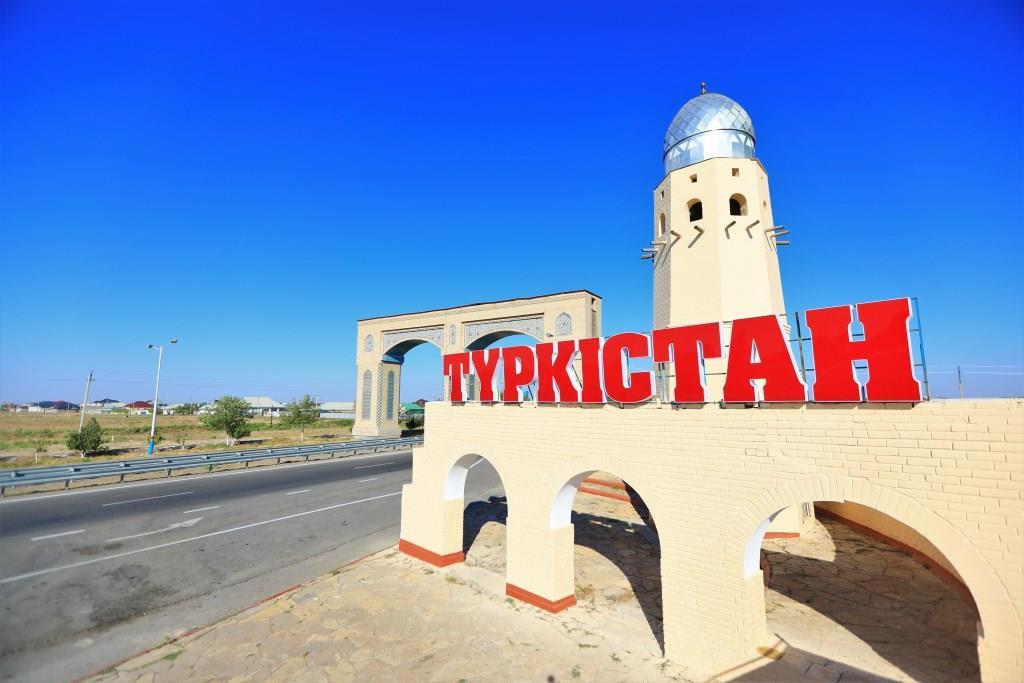 On June 19, 2018, Nursultan Nazarbayev signed a decree according to which Shymkent became a city of republican status along with the cities of Almaty and Astana. The administrative center was moved to Turkestan, and the region was renamed from South Kazakhstan to Turkestan. Thus, Shymkent became the 17th region of the Republic of Kazakhstan. During the signing ceremony, the President expressed confidence that the new status of the city of Shymkent will contribute to its further successful promotion and will open up new unique prospects for the city. During the signing ceremony, President Nazarbayev stressed that the newly formed Turkestan region has all the possibilities for the qualitative implementation of new administrative functions, and noted the important historical significance of the decision. He also expressed his hopes that this decision will give a steady impetus to a balanced socio-economic development of the city and consistently improving the quality of life of the inhabitants of the entire region. At the end of the signing ceremony, the head of state gave specific instructions to the local executive power of the city of Shymkent and Turkestan region on the qualitative and operational implementation of the decree and ensuring an efficient operation of local administrations.

The decision of changing the status of Shymkent was mainly motivated by the fact that on June 1, 2018, the city’s population officially reached one million people. However, the idea of administrative changes were planned several years before that. Despite rather rapid population growth of over 1.3%, Kazakhstan is still a sparsely populated country with a population density of 6.7 people per square km. Kazakhstan is rather urbanized country with 57.6% urban population and slightly over 20.0% of the population living in urban areas with population of one million or more. However, due to distances between the largest urban areas, the concentration effect that is necessary for efficient functioning of the firms is still very low. The geographic distances between the three existing largest urban areas of Almaty, Astana and Shymkent are 605 km, 987 km and 974 km. Larger concertation of population in particular areas creates larger local markets allowing firms to benefit from the economies of scale[1]. Dynamic demographics of the region as well as densely populated suburban areas around the city of Shymkent made it the number one candidate for the third city with population of one million people [1]. Therefore, the government of Kazakhstan has always been interested in population growth of the city of Shymkent. Thus, in 2013, the territory of the city was increased from 76 hectares to 117 hectares encompassing many adjacent and nearby villages from neighboring districts.

Based on newly available statistical data from the Committee on Statistics of the Ministry of national Economy, we can plot the economic image and significance of the region of Turkestan and the city of Shymkent. The data reveals that Turkestan region is by far the poorest region of Kazakhstan with only 559.5 thousand tenge of GRP per capita per nine months of 2018 compared to the GDP per capita of 2.18 million tenge for Kazakhstan (See Figure 1a.). These differences, however, does not reflect the level of welfare in the regions since there are redistributive fiscal measures that make income more or less equal between them. In this regard, in 2017 when the city of Shymkent was administratively in the South Kazakhstan region, nearly four fifth of the regional budget consisted of transfers from the republican budget making it the most fiscally dependent region. In 2017, the budget expenditures of the South Kazakhstan region exceeded the revenues by five times [2]. Not surprisingly the new data reveals that even after fiscal transfers and other adjusting measures by the central government both the region of Turkestan and the city of Shymkent are the regions with the lowest levels pf income per capita (See Figure 1b.). Even the fact that Shymkent is a city with nearly one million population does not make any difference and there is a huge gap between Shymkent and other two cities of the republican status. 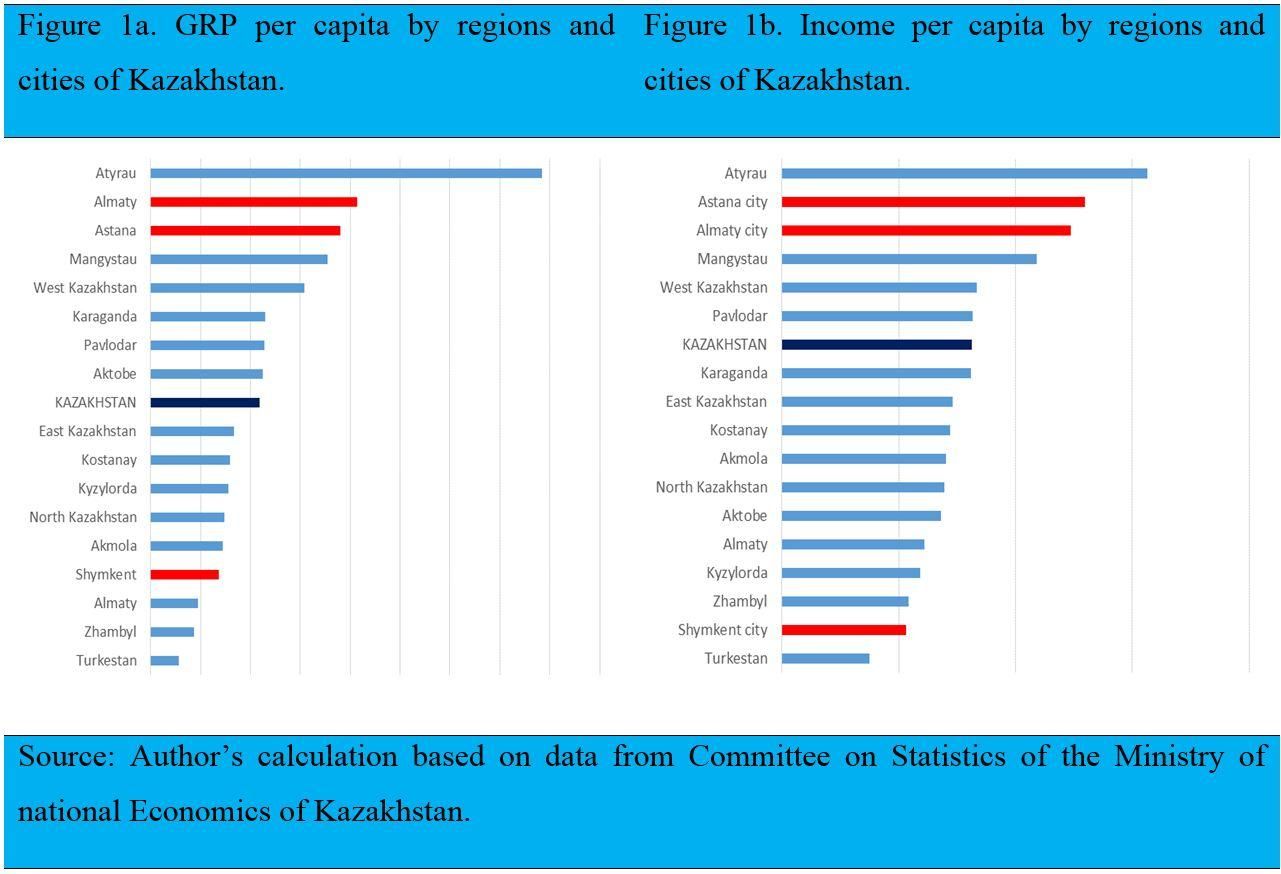 The poverty of the Turkestan region relative to the rest of the regions of Kazakhstan can explained by the structure of its GRP. 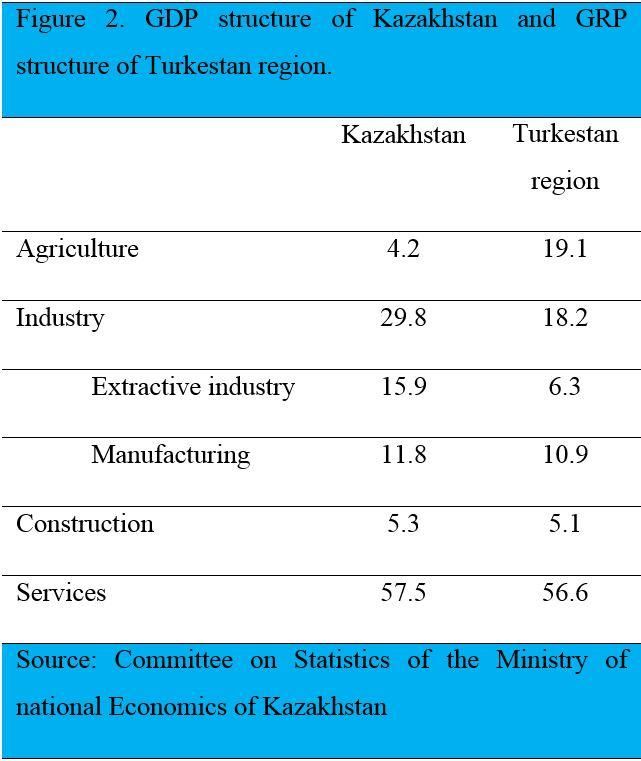 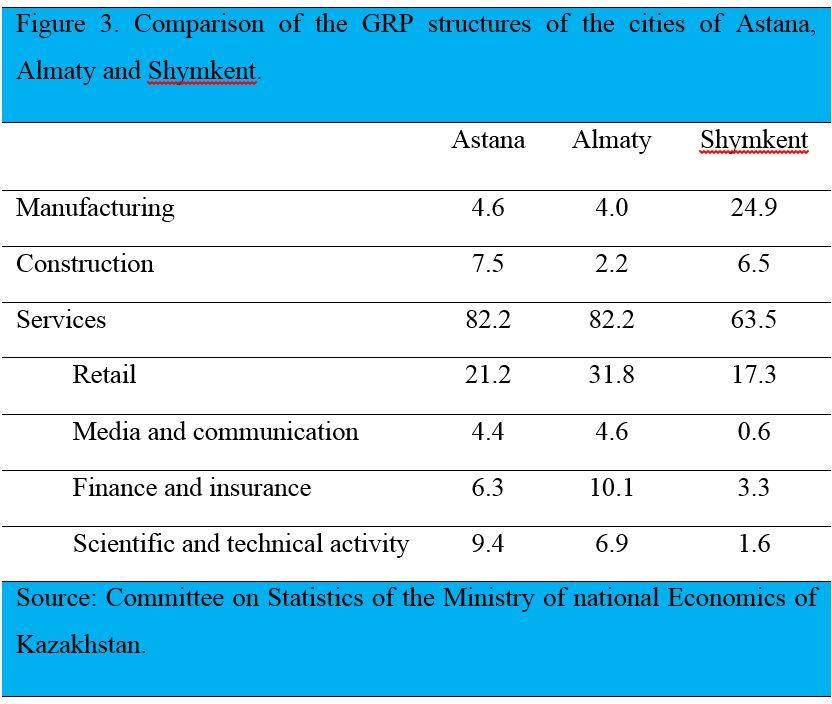 The new data on the city of Shymkent also allows us to compare it with two other cities of republican status. Looking at the GRP structure of the three cities in Figure 3, we can see that there are big differences between Shymkent and the other two major cities of Kazakhstan. Unlike Astana and Almaty, Shymkent is a much more industrialized country. In general, if we look at many other developing countries there is a negative correlation between the city population size and the share of industry once the population larger than 500 thousand or sometimes 750 thousand. Usually the top largest cities in a particular country tend to accumulate more services in their GRP whereas industries tend to transfer to the outskirts and/or other nearby smaller cities due to rising rent prices and growing income of the population that begin to create demand on services. The share of manufacturing in the GRP of Shymkent is almost 25% whereas in Almaty and Astana this share is less than 5%. Instead of industry, the cities of Almaty and Astana specialize more on services and more than four fifth of their GRP consist of service sector whereas in Shymkent the share of the service sector is 63.5%. Decomposing the service sector we can reveal that Shymkent does not yet possess main features of urban centers with population of one million or more. For instance, the share of retail trade is still considerably lower than in Astana and Almaty. These two cities are also the main centers of mass media and communication, which makes more than 4% of the GRP of the cities of Almaty and Astana whereas in Shymkent it is only 0.6%. The same can be said about financial activities. Most importantly, however, the city of Shymkent still does not function properly as a center of innovation and knowledge spillover, which is an essential part of any urban center.

The necessity of large urban areas and areas with high population density is a geographic necessity imposed on Kazakhstan. Nowadays, around 20% of the total population of the country live in three major cities of Almaty, Astana and Shymkent and yet they account for nearly one third of the country’s GDP. Hence, the effect of concentration of population and capital in particular geographic areas does contribute to higher productivity due to the effect of economies of scale. In this regard, the intentions of the government aimed at creating the third largest urban area is understandable. However, the means of this objective can be questioned. The government of Kazakhstan at least for now has opted for administrative and bureaucratic ways of reaching its objectives. Thanks, to newly available data on the Turkestan region and the city of Shymkent and looking at basic economic indicators we can see that the two new administrative entities of Kazakhstan are negative outliers. In a certain sense, the two newly created regions represent the main structural problems and deficiencies of the entire economy of the country such as low labor productivity in all sectors except extractive industry, lack of foreign direct investments in many sectors of the economy, low share of new technologies and innovations etc. Despite relatively high population density, suitable climate for agriculture, proximity to Uzbekistan and other regional Central Asian markets, the two regions are the poorest ones among all the regions of Kazakhstan. Common practice in regional economics from many developed countries show that in promoting regional and local development the role of private initiatives are much more important than administrative interventions of the central government. The given topic fully deserves further research in various frameworks. Thanks to availability of data on the two newly created regions of Kazakhstan, from now on it becomes much easier.

[3] – Committee on Statistics of the Ministry of National Economy. Main Demographic Indicators of Kazakhstan 2018: http://stat.gov.kz/faces/wcnav_externalId/homeNumbersPopulation, (Accessed 08.01.2019).

[5] – Committee on Statistics of the Ministry of National Economy. Living Standards of Population 2018: http://stat.gov.kz/faces/wcnav_externalId/homeNumbersLivingStandart, (Accessed 19.01.2019).

[1] A proportionate saving in costs gained by an increased level of production.