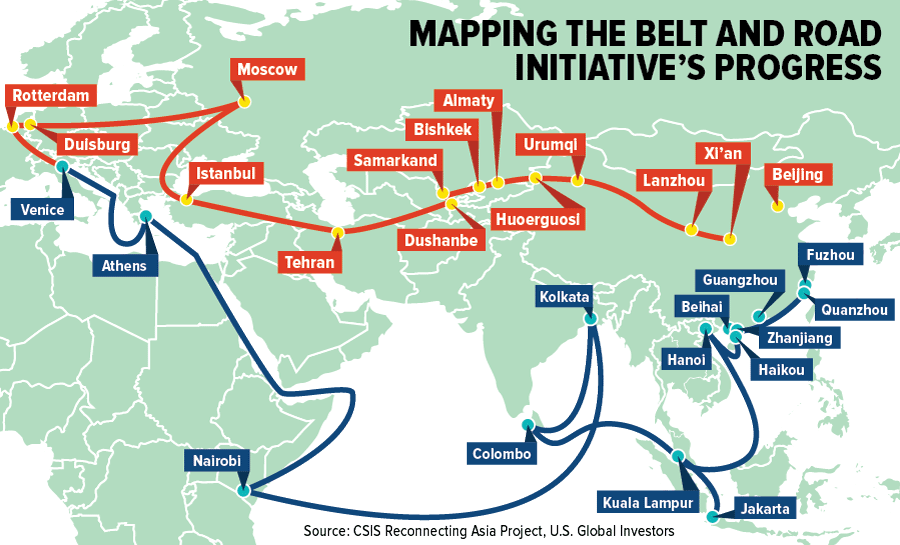 Contemporary China is facing an environmental catastrophe after a period of dynamic growth in industrialization. In 2012, at the 18th Chinese Communist Party Congress, Chinese authorities recognized that during past thirty years the government worked in accordance with the “economic growth is preferable” principle and had failed to give due consideration to environmental protection (EP). Since that time, EP has become one of the major development objectives of China. On the other hand, China is the main source of investment in the world. With the announcement of the Belt and Road Initiative (BRI) in 2013, Beijing expanded outbound investments in the countries participating in its implementation. A recent increase in Chinese investments in the BRI countries is a mainstream of current international financial relations. According to the World Resources Institute, the number of energy and infrastructure syndicated loans with participation of major Chinese banks during 2015-2017 grew three-fold compared with the period from 2012 to 2014. Thus, the BRI boosted the outward foreign direct investment to the countries along the route by 31.5% in 2017, while Beijing’s loans to the entire world diminished by about 20% [Zhou et al., 2018]. Thus, the estimated financing amount of infrastructure projects throughout Asia, Europe and Africa in the framework of the BRI is $8 trillion [Ming, 2018]. However, China is considered as a source of environmental risks by many hosting countries involved in the grand project [Shinn, 2016]. Countries seek not only economic benefits, but are also concerned about environmental friendliness of Chinese investments and their possible harmful impact on local and regional ecology. This trend challenges the sustainability of the BRI and its implementation. The BRI aiming to enhance connectivity on the Eurasian continent through 70 countries will make a great impact on the whole world environment. The BRI countries represent about 40% of the world territory, 60% of the global population, 30% of the world GDP, and 55% of the CO2 pollution [Green Finance Initiative, 2018a]. This kind of global infrastructure development is essentially associated with significant ecological problems. Thus, Beijing endeavors to address these threats.

Despite the fact that China is a party to most UN conventions on the environment and the Paris Agreement, it is not a member of any conventions of the UN Economic Commission for Europe, which is essentially a mechanism for minimizing environmental risks and negative impacts on nature in the implementation of transborder projects. There is a need to create a tool for the legal settlement of transboundary environmental issues, since BRI projects primarily involve neighboring countries. Besides, China as an emerging superpower which provides an alternative to the U.S. global governance concept cannot prove its legitimacy without green ideology and policy. On the other hand, China as a country with the dire state of its environment is really interested in addressing environmental issues and preventing future regional ecological problems. In 2016, China introduced its own vision of BRI EP – the concept of an ecological civilization that it aims to integrate into the BRI by 2025. Greening of the BRI also meets China’s ambitions as a country that has been promoting eco-environmental protection for the past decade and as a successful example of green transformation – an innovator and world leader in green technologies such as the production of solar panels and floating hydroelectric power plants. China showed a great commitment to the Green BRI by publishing the Guidance on Promoting the Green Belt and Road and the Belt and Road Ecological and Environmental Cooperation Plan formulated by the Ministry of Environmental Protection (MEP) of China in 2017. The latter states that “guided by the philosophies of ecological civilization and green development, the Belt and Road Initiative will be advanced in an environment-friendly way to improve green competitiveness, covering policy coordination, facilities connectivity, unimpeded trade, financial integration and people-to-people bonds” [MEP, 2017]. Through these programs, China claims to introduce common ecological standards for the BRI countries, establish green finance institutions, and minimize ecological risks of the ongoing projects. Moreover, the Chinese government established cooperation with the United Nations Environment Program (UNEP) on developing the Green BRI. According to the UNEP, in addition to global climate change, the BRI implementation challenges the UN sustainable development goals 2030 [UNEP, 2017]. The UNEP’s engagement in the Green BRI has translated into the joint UNEP-MEP cooperation plan. Moving to an ‘ecological civilization’ in China will require annual green investment ranging from $474 billion to $633 billion in the period of 2015-2020 [Green Finance Initiative, 2018b]. Therefore, China established five institutions on green financing. In case of a successful implementation, the plan will result in introducing higher EP standards in the BRI countries and accomplishing the UN Sustainable Development Goals by 2030. In addition, the creation of environmental innovation and technology transfer bases in the countries of ASEAN, Central Asia, South Asia, Central and Eastern Europe, Arab World and Africa is planned; besides, an International Union for Green Belt and Road Development will be formed to serve as a cooperative and regulatory mechanism.

Another current agenda of this long-term target is a big gap between the development level and the volume of economies of the BRI countries. As a result, establishing common higher standards is a very comprehensive issue. For example, with the introduction of green technologies in the energy sector, final prices of energy products and energy tariffs will significantly increase, but not all countries are ready to increase prices and tariffs as many of them prioritize economic and social stability. Banks investing in BRI projects are interested in making profit, indicating that they are not environmental funds with a shared capital of the BRI countries. Mostly the BRI includes newly emerging economies and developing countries. Since these economies in transition are suffering from such negative impacts of industrialization and urbanization as air pollution and nature degradation, the study of a model of aggregate ecological and economic advancement and preferential promotion of the green economy are increasingly important to them. However, many developing countries involved in the BRI still legislatively lower environmental responsibility for enterprises to increase their investment attractiveness. Therefore, relevant management strategies and policies of each country involved in greening the BRI are crucial. Thus, currently, there are no established environmental positions and tools to minimize environmental risks.

The data analyzed by the World Resources Institute show that major Chinese financial flows in BRI energy and transportation projects are still implemented in classical sectors and do not have a strong commitment to the low-carbon sectors. The research states that with major Chinese banks’ participation $102.6 billion was invested in the BRI countries’ oil, gas and petrochemical sectors during 2014-2017, whereas only $25.7 billion was invested to electric power generation and transmission, and $12.4 billion was directed to transportation [Zhou et al., 2018].

In conclusion, the consistency and implementation of the Green BRI will depend on the development of policy and regulatory tools to translate the concept into practical measures. It should be noted that in view of the lack of new powerful engines or incentives, it is reasonable to expect that Chinese investments will continue to focus on the traditional transport and energy sectors, which will be a serious obstacle to the development of green technologies. Eliminating environmental impacts of BRI projects can be an essential element of ensuring the long-term sustainability of the BRI [Lu, 2018]. According to China’s goals for the years to come, Beijing will strive to use green funds to become an activator of low-carbon technologies in the region, which would lay a foundation for the country’s climate ambitions – the implementation of the UN sustainable development goals until 2030. In addition, this trend will strengthen the competitiveness of Chinese investments abroad – Beijing’s main instrument of influence. Future investment contributions made by Chinese institutions in the BRI countries will influence the image and perception of China abroad in relation to climate change and the task of global governance. Clearly, Beijing has recognized the importance of incorporating the BRI’s green strategies at the high level, supporting them with a conceptual base. Now a transition to concrete actions is the most important, as well as the development of mechanisms and joint decision-making by the BRI countries concerning green investments.

Green Finance Initiative (2018a). Greening the Belt and Road. Retrieved from http://greenfinanceinitiative.org/wp-content/uploads/2017/10/Greening-the-Belt-and-Road-English.pdf. Accessed 09.03.2019.