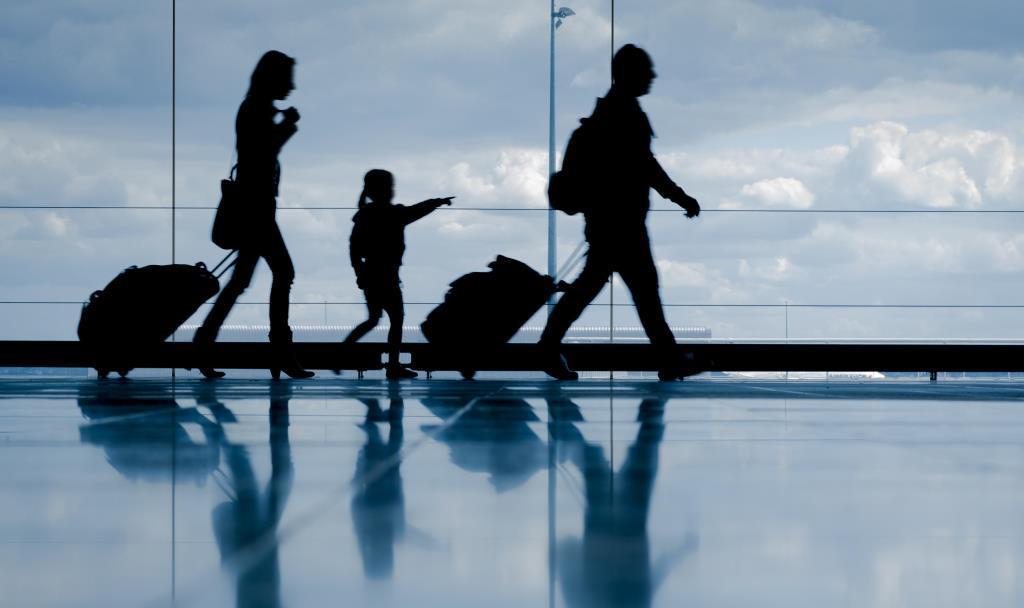 According to the most recent data from the Committee on Statistics of the Ministry of National Economy of Kazakhstan, the internal migrants in 2018 amounted to 91,347 people, which is the second highest number of internal migrants registered within a year since 2000, the first being in 2016 when 106,518 people migrated from one region of the country to another. Thus, compared to 2017, the number of internal migrants in 2018 increased by 37.5%. However, before making analysis this figure should be adjusted due to administrative changes in the territorial structure of the country that were made in 2018. In particular, on June 19 of 2018 the South Kazakhstan regions was reorganized into two administrative territorial units of Turkistan region and the city of Shymkent and 2018 is the first year when these two territorial units appear separately [Akorda, 2018]. 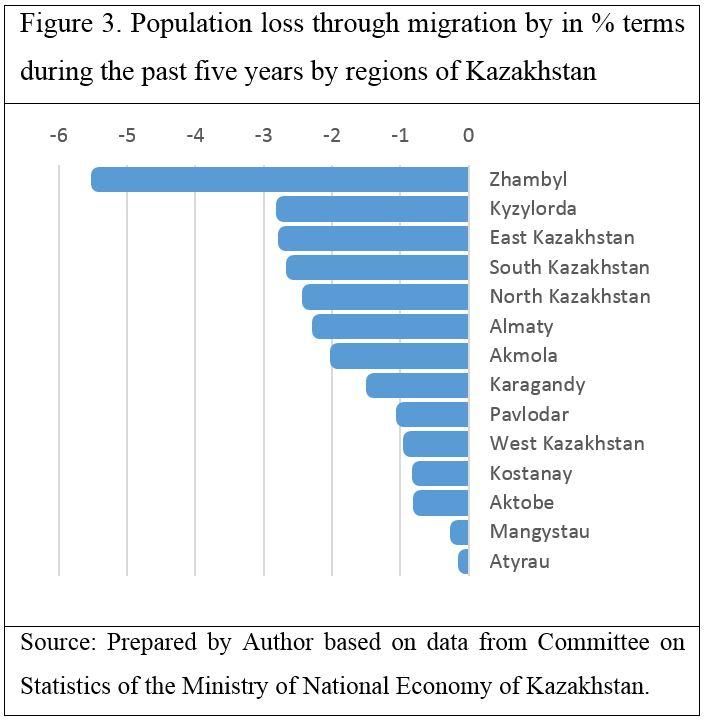 In order to see which regions lose the most in terms of internal migration of population we plot Figure 3, where can observe the number of internal net migrants calculated as the sum of net migrants during the past five years as percentage of the average population of the region during the past five years. As we can see, all southern regions and well as extreme northern and extreme eastern parts of the region demonstrate the highest levels of net internal emigration. On the other hand, the two leading western oil-producing regions have the least number of net internal emigrants. One of the straightforward explanations for such drastic differences of the number of internal migrants is the level of wealth. Thus, plotting the GRP per capita, which is one of the most basic indicators of regional wealth, against the percentage of net emigrants we get a rather accurate negative relationship between these two parameters (See Figure 4). Obviously, relative wealth and well-being of households is one of the factors determining the internal migration and the population tends to flee from poorer regions to wealthier regions. 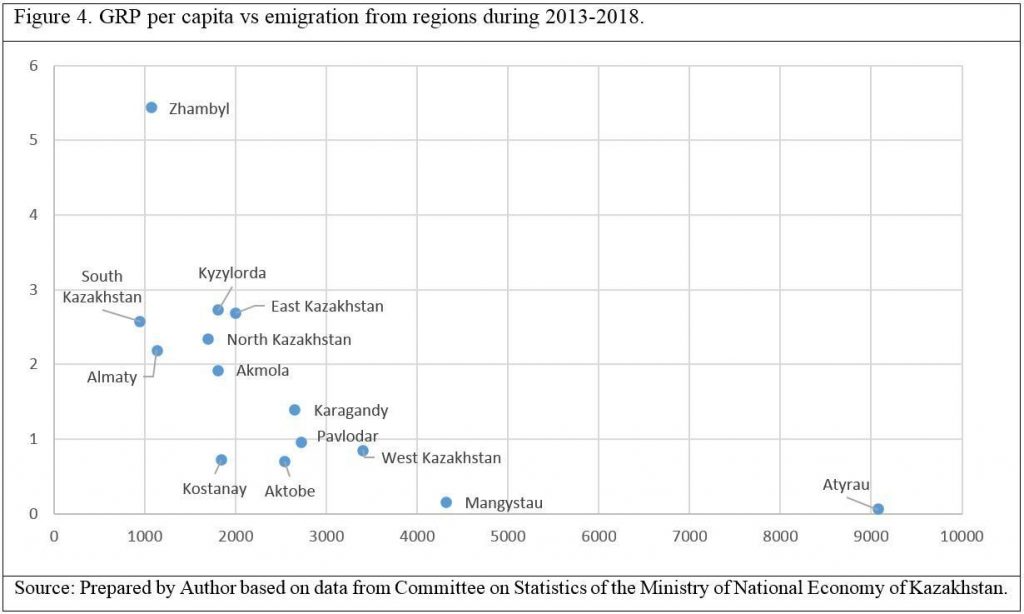 The fact that Shymkent turns out to be one of the major points of attraction along with Almaty and Nur-Sultan can be decomposed into two factors. Firstly, being one of the major urban areas itself generates centripetal forces attracting internal migrants that seek better jobs, amenities, opportunities for studying etc. On the other hand, the case of Shymkent can also be explained by the fact that the surrounding region of Turkistan has the highest population density with numerous small settlements closely connected with the city. Hence, Shymkent simply has greater number of people living around the city and willing to move to the nearest major city than do Almaty or Nur-Sultan. When these people decide to move to a big city they simply minimize their costs of transportation and relocation and opt for Shymkent, which is nearest major urban area. Finally, wealth of the regions is one of the primary factors that explain internal migration patterns in Kazakhstan. There is a clear negative relationship between GRP per capita and the number of net emigrants from the regions suggesting that more people tend to abandon relatively poorer regions and move to big cities or other relatively wealthier regions.

Akorda (2018). On some issues of the administrative-territorial structure of the Republic of Kazakhstan. Retrieved from http://www.akorda.kz/ru/legal_acts/decrees/o-nekotoryh-voprosah-administrativno-territorialnogo-ustroistva-respubliki-kazahstan. Accessed on 08.07.2019.

Zakon.kz (2019). Temporary registration in Kazakhstan. Retrieved from https://www.zakon.kz/s/vremennaja-registracija-v-kazakhstane/. Accessed on 08.07.2019.