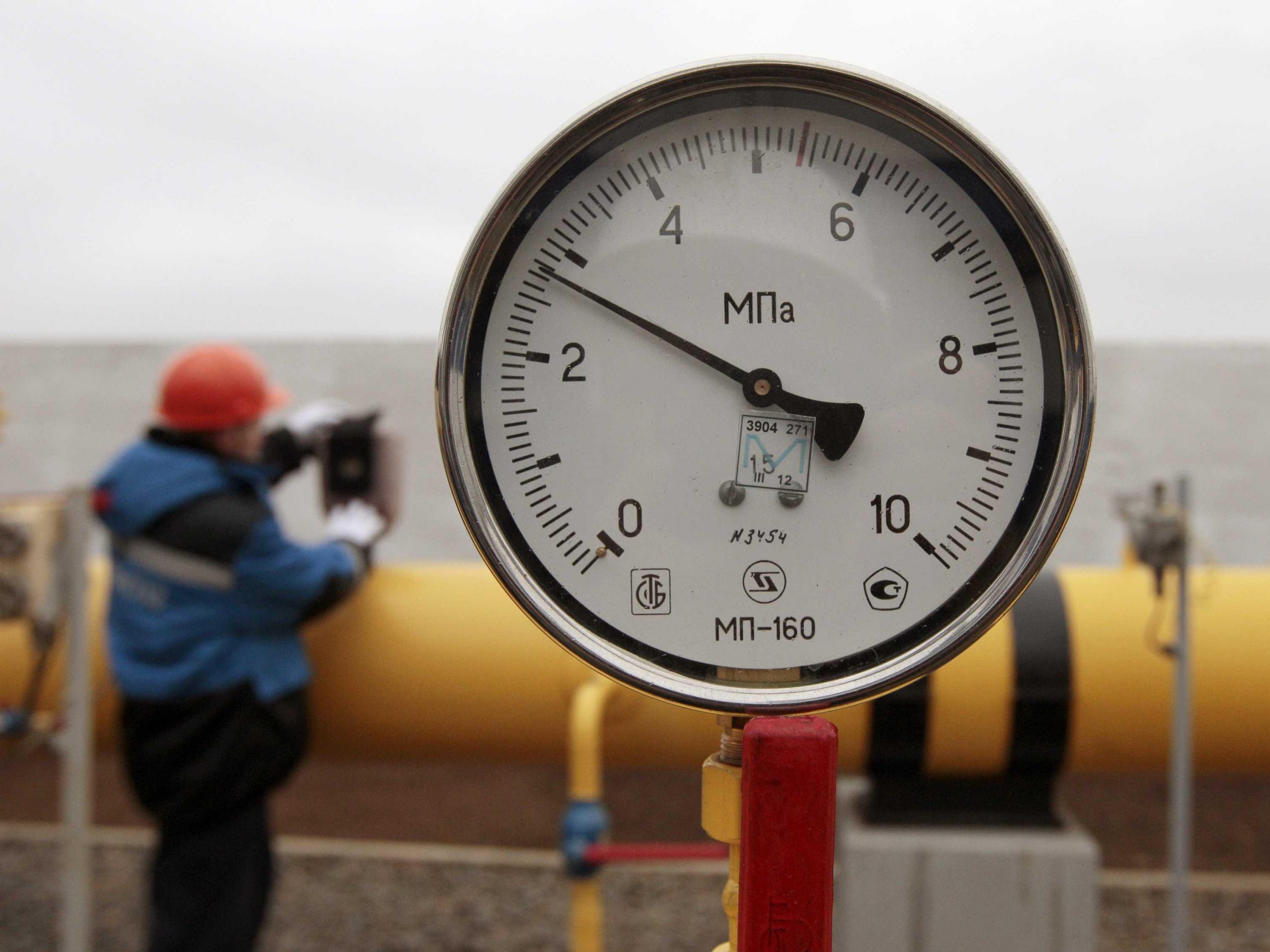 It is essential for the oil-rich Kazakhstan to ensure the progressive development of the export capacity in all the major export routes, as well as to secure transportation of oil and petroleum products to domestic markets. In order to provide oil transportation services and to operate the country’s oil pipeline network the Government of Kazakhstan established the National Oil Transportation Company KazTransOil (KTO) in 1997, which in 2002 became a specialized subsidiary of KazMunaiGas. Therefore, it can be inferred that KTO is a national monopoly, which has been granted an ownership of the largest network of main oil pipelines with a total length of 5,502,997 kilometers[1] and waterlines with a total length of 2,148,100 kilometers. As the largest oil pipeline company in Kazakhstan, KTO ensured oil transportation by 37 oil pumping stations, 64 oil preheaters, and tank farms for oil storage with a total capacity of 1,259,000 cubic meters. Moreover, oil transshipment is performed by 4 loading-unloading railroad docks, oil loading facilities installed on 5 piers of the oil loading terminal in the Aktau seaport, as well as oil loading facilities installed in the Batumi seaport[2]. (KazTransOil, 2016)

Aimed at providing the oil-flow redistribution between the domestic market and export routes KTO is focused on upgrading the existing system of main pipelines and developing new projects to diversify oil supplies, especially, in western and eastern directions. Since its establishment, KTO has replaced more than 1,000 kilometers of the main oil pipelines and renewed over 60% of tank farms. Moreover, the company invested in the construction of the new domestic pipelines, namely, the Alibekmola- Kenkiyak and the North Buzachi-Karazhanbas. In September 2016, KTO reported that the overhaul of the Kazakh section of the major oil pipeline Tuimazy-Omsk-Novosibirsk-2 (TON-2)[3] was completed giving an opportunity to increase its transit potential from 7 million tons of oil to 10 million tons of oil per year. (East Time, 2016)

It should be specified that since Kazakhstan entered into the active implementation phase of its export diversification strategy in the 2000s, KTO has not had the full ownership of a number of export pipelines commissioned that time, namely, the Caspian Pipeline Consortium (CPC) or the Tengiz-Novorossiysk pipeline that exports oil to the European market via Russia, the Atasu-Alashankou pipeline that exports the Kazakh and Russian oil to China and the Kenkiyak-Atyrau pipeline, which is used for domestic oil transportation. (KAZENERGY, 2015) These pipelines are owned by the Consortium of investors, in which KTO is a shareholder. For instance, to date, the company is a shareholder of the following legal entities with foreign participation: (a) the Kazakhstan-China Pipeline (KCP), which owns the Atasu-Alashankou and the Kenkiyak-Kumkol oil pipelines on parity basis with the China National Oil and Gas Exploration and Development Corporation; (b) MunaiTas, which  owns  the Kenkiyak-Atyrau oil pipeline,  shareholders of which are KazTransOil (51%) and the China National Petroleum Corporation (49%). 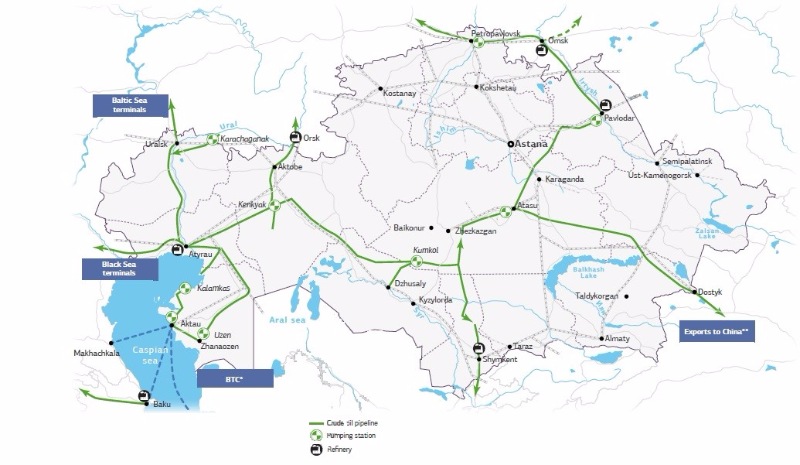 As it shown in Figure 2, KTO established partnership relations with Russia in relation to the Kazakh oil transportation. Kazakhstan and Russia agreed to jointly use a number of oil pipelines for oil transportation. For instance, the transit of the Russian oil to China via the Kazakhstani oil pipeline network in the amount of 7 million tons per year started since January 2014.[1] The parties agreed to provide the Russian oil supplies via the Omsk-Priirtyshsk-Atasu-Alashankou route. Actually, the reconstruction of the TON-2 pipeline paved the way to increase the transportation of both the Kazakh oil to the Pavlodar Petrochemical Plant and the Russian oil to China through the territory of Kazakhstan. Moreover, since December 2015, the sides launched the Kazakh oil shipment to the country’s refineries via the route passing through the Russian territory, namely, via the Atyrau-Samara-TON-2- Priirtyshsk-Kazakhstani oil refineries route. 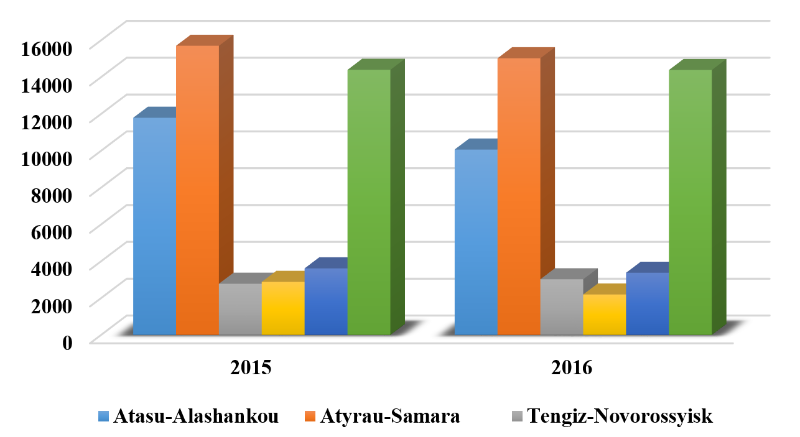 It could be concluded that since the lion’s share of the revenues of KazTransOil includes crude oil transportation (83%) and oil reloading and railway shipment (7%), it could be expected that in 2016 the national operator of oil pipelines will face the decline in revenues. However, taking into account the fact that according to the Energy Ministry’s forecasts, Kazakhstan will increase the oil output from 78 million tons in 2016 to over 80-82 million tons in 2017, KazTransOil could significantly improve its operational results next year.

[2] KTO controls the assets in the Batumi Oil Terminal LLC, as well as exercises exclusive management rights on 100% of shares of the Batumi Sea Port LLC.

[3] Worth recalling, the major oil pipeline TON-2 was built and commissioned in 1959. It passes through the territory of both Russia and Kazakhstan. The total length of the Kazakh section of the TON-2 is 185.6 kilometers. The total cost of the project exceeded 32 billion tenge.

[4] Kazakhstan and Russia signed an agreement on cooperation in the sphere of transportation of the Russian oil to China through Kazakhstan on December 24, 2013.