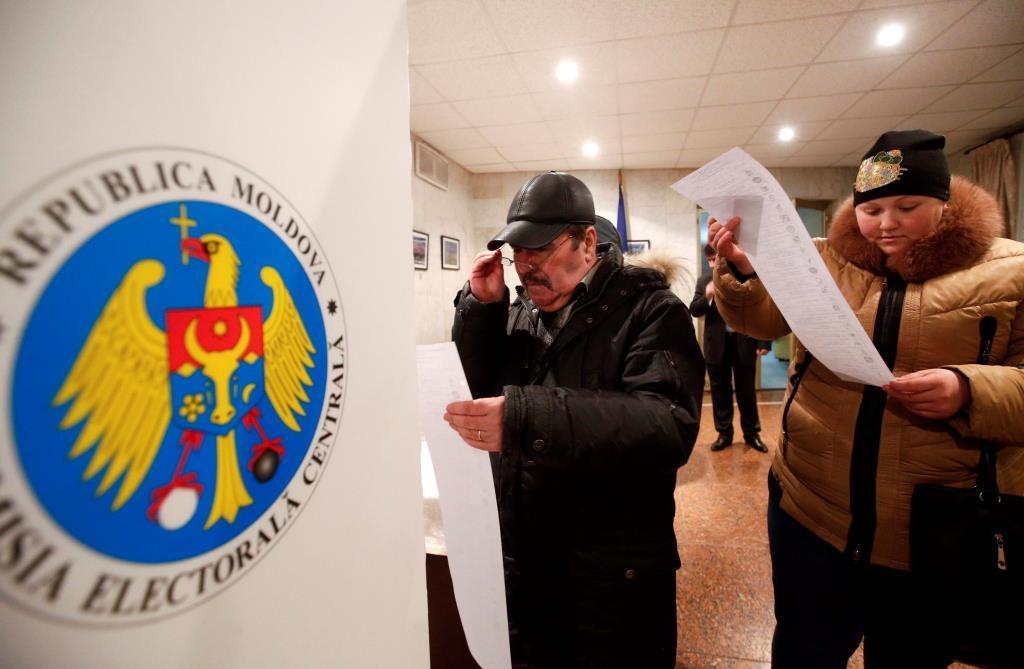 On 24 February of 2019, parliamentary elections in the Republic of Moldova were held. The previous parliamentary elections in the Republic of Moldova took place on 30 November 2014. According to the Constitution of the Republic of Moldova, parliamentary elections must be held within three months before the expiration of the mandate of current deputies of the Parliament. Moldovan has a mixed electoral system for parliamentary elections since 2018. In particular, 50 seats in the Parliament are distributed among parties based on a party list system depending on the election results held on a national base. The resting 51 electoral mandates are distributed based on results from 51 electoral districts that cover all the national territory including Transnistria (Pridnestrovian Moldavian Republic) as well as Moldovan citizens living permanently outside the country. Two of the electoral districts represent Transnistria, three districts cover population living abroad, 11 represent the capital city of Chișinău and the rest of the seats are split among other cities and regions of the country.

According to the results of the elections, four political parties managed to overcome the 6% threshold to the parliament. The extreme-leftist “Socialist Party of the Republic of Moldova” (Partidul Socialiștilor din Republica Moldova (PSRM)) with 31.15% of the votes got most of the votes. The center-rightist electoral bloc ACUM, which is the union of two pro-European parties of the “Party of Action and Solidarity” (Partidul Acțiune și Solidaritate (PAS)) and the “Party of Dignity and Truth” (Platforma Demnitate și Adevăr (PDA)), got 26.84% of the votes. The third largest share of the votes of 23.62% went to the center-leftist “Democratic Party of Moldova” (Partidul Democrat din Moldova (PDM)). The rightist party “ȘOR”, which formerly was called “Ravnopravie” and positions itself a supporter of the Russian-speaking part of the population of Moldova, barely overcame the minimum parliamentary threshold gaining 8.32% of the votes. The rest of the votes were split between the “Communist Party” (3.75%), “Nostru Party” (2.95%), “Liberal Party” (1.25%) and others. The Socialist party got the largest number of seats in the Parliament winning 35 mandates. The Democrats and the ACUM bloc got 30 and 26 mandates respectively and maintain approximately the same level of influence whereas the ȘOR party are represented in the parliament by only seven deputies. Interestingly, the turnout was record low – 49.5% and the most active age group at the elections was those between 56 and 70.

On March 9 of 2019, the Constitutional Court of Moldova approved the mandates of all 101 members of the Moldovan Parliament. Deputies from four abovementioned political parties and three independent deputies became members of the main legislative body of the Republic of Moldova for the next four-year period. According to the observers from the European Parliament which monitored the vote on February 24, the elections in Moldova were free and transparent (ava.md, 2019). Despite 72 complaints registered by the Central Electoral Committee of Moldova, in overall terms, the European parliamentarians positively evaluated the elections.

Although the Socialist party that won more seats in the Parliament than other parties does not declare its sympathies towards integration with the “East” and prioritize cooperation with Russia, it is perceived to be so. Moreover, in 2016 the leader of the party and the current President of Moldova Igor Dodon in one of his interviews declared that the signing of the EU Association Agreement by Moldova in June 27 of 2014 had been a big mistake and that he was going to support integration with the Eurasian Union (stirileprotv.ro, 2016).

It is believed that the second position in the elections is split between the Democratic Party and ACUM. The Democrats won slightly more seats in the Parliament than ACUM whereas the ACUM got slightly more votes than Democrats. It is important to note that despite the fact that both the Democratic Party and the ACUM bloc declare pro-European stance and have common goals in most of the vitally important issues, the two parties are more rivals than allies and the relations between the Democratic Party and the Bloc ACUM are complicated by personal rivalry of their leaders. On June 19 of 2018, for instance, the court overturned the results of the election of the mayor of the capital city Chișinău and canceling the mayoral mandate of Andrei Năstase, who is the founder of the Party of Dignity and Truth, which currently enters the ACUM bloc. In response, Andrei Năstase declared that the Chairman of the Democratic Party “oligarch Vladimir Plahotniuc” stands behind the cancellation of the elections and initiated protests bringing several thousands of people to the main avenue of Chișinău (tass.ru, 2018). It is also interesting to note that by the parliamentary election results, Maia Sandu, who was a presidential candidate in previous presidential elections of 2016 and lost to the current President Igor Dodon, was nominated as a single-mandate deputy from ACUM bloc. This factor is very likely to foster the political rivalry between the ruling Socialist Party and the ACUM bloc since the President Dodon and one of the leaders of the ACUM bloc Maia Sandu represent two opposite views in a very wide range of political issues.

Given such uniform distribution of votes and parliamentary seats between the three main political parties of Moldova and fundamental differences in their political agendas, it is going to be difficult to form a parliamentary coalition that would constitute a majority of the main legislative power of the country. Besides contrary views on key political issues, the consolidation is complicated by personal rivalries between some of the leaders of the three main political parties. Both of the leaders of the ACUM bloc Andrei Năstase and Maia Sandu on behalf of the 26 elected deputies from the political bloc already declared that they would not accept any coalitions neither with the Democrats nor with the Socialists (unimedia.info, 2019). The Socialists and ACUM bloc propose completely different views and policies concerning a wide range of important political issues. However, the point, on which the two parties disagree the most and propose polarly opposite policies is the foreign policy. In particular, the Socialist Party insist on pro-Russian foreign policy with a strategic partnership with Russia whereas the fundamental idea of the ACUM bloc is the European integration. On the other hand, the leader of the Democratic Party, Vladimir Plahotniuc said that the PDM was ready to negotiate on forming a parliamentary coalition with any of the parties elected to the Parliament (moldova.europalibera.org, 2019). After the refusal of the ACUM bloc to form coalitions with Democrats and Socialists, it becomes very likely that the Democratic Party and the Party of Socialists would prefer to avoid anticipated elections and try to create a formal or informal alliance (Țăranu, 2019).

At the first meeting of the parliament held on March 21 of 2019, the newly elected deputies managed to form three fractions. As it was expected, the ACUM bloc refused to form fractions with other parties and their position remains unclear. The definite decisions on parliamentary factions have to be taken during the next parliamentary meeting in April of 2019. The President of Moldova Igor Dodon said that if the parliament does not start its work within the next three months, then there is no way out except for the dissolution of the parliament and the appointment of re-elections.

The parliamentary elections of 2019 in Moldova presented interesting results with the high level of fragmentation of the parliament, which is caused not only by the ideological standoff but also because of issues on trust and competition which could lead to rivalry among the leaders of political parties. It is important to note, however, that the main issue of discord among the political parties is the future policy and the question of cooperation and integration with East or West. The vector of future economic and political integration is one of the everlasting debates in Moldovan society. There are geographical, economic, political, social and other factors contributing to the East and West split of opinions in Moldova. External political and economic forces usually has an influence on the political life inside the country. Moldova is a small economy with a GDP of around $8.1 billion and that relies greatly on both the European Union (EU) as well as on the Eurasian Economic Union (EEU). Around 47% of trade of Moldova is done with the EU and another 19% is done with the EEU. It becomes clear that despite the current stance of the ACUM bloc, the Democratic Party would accept the key conditions of the Socialist Party of Moldova, which is very likely to dominate in the Parliament of Moldova. Hence, we can expect that within the next few years the foreign economic policy of Moldova would be inclined towards the East in favor of more intense cooperation with Russia and the EEU. On the other hand, it is also worth mentioning that Moldova is a member of the Eastern Partnership initiative of the EU along with Armenia, Azerbaijan, Belarus, Georgia, and Ukraine. Therefore, the results of the parliamentary elections and the current pending situation in the parliament of Moldova give reasons to expect a further intensification of controversies and of the political life in the near future.

Central Electoral Commission of the Republic of Moldova: https://a.cec.md/ro/procese-verbale-scanate-circumscriptia-nationala-4291.html, Accessed: 22.03.2019.

Moldova.europalibera.org, 28.02.2019: “Maia Sandu: “We will not join the coalition with either PDM or the Socialists”, (Mayya Sandu: «My ne vstupim v koalitsiyu ni s DPM, ni s sotsialistami»): https://moldova.europalibera.org/a/interview-maia-sandu-pas-da-acum-moldova-parliament-elections-coalition/29796118.html, Accessed: 22.03.2019.

Stirileprotv.ro, 14.11.2016: “Igor Dodon: “The signing of the Association Agreement with the EU was a big mistake.” What the President of the Republic of Moldova said about Russia”, (Igor Dodon: “Semnarea Acordului de Asociere cu UE a fost o mare greseala”. Ce a spus presedintele R. Moldova despre Rusia): https://stirileprotv.ro/stiri/international/igor-dodon-semnarea-acordului-de-asociere-cu-ue-a-fost-o-mare-greseala-ce-a-spus-presedintele-r-moldova-despre-rusia.html, Accessed: 20.03.2019.