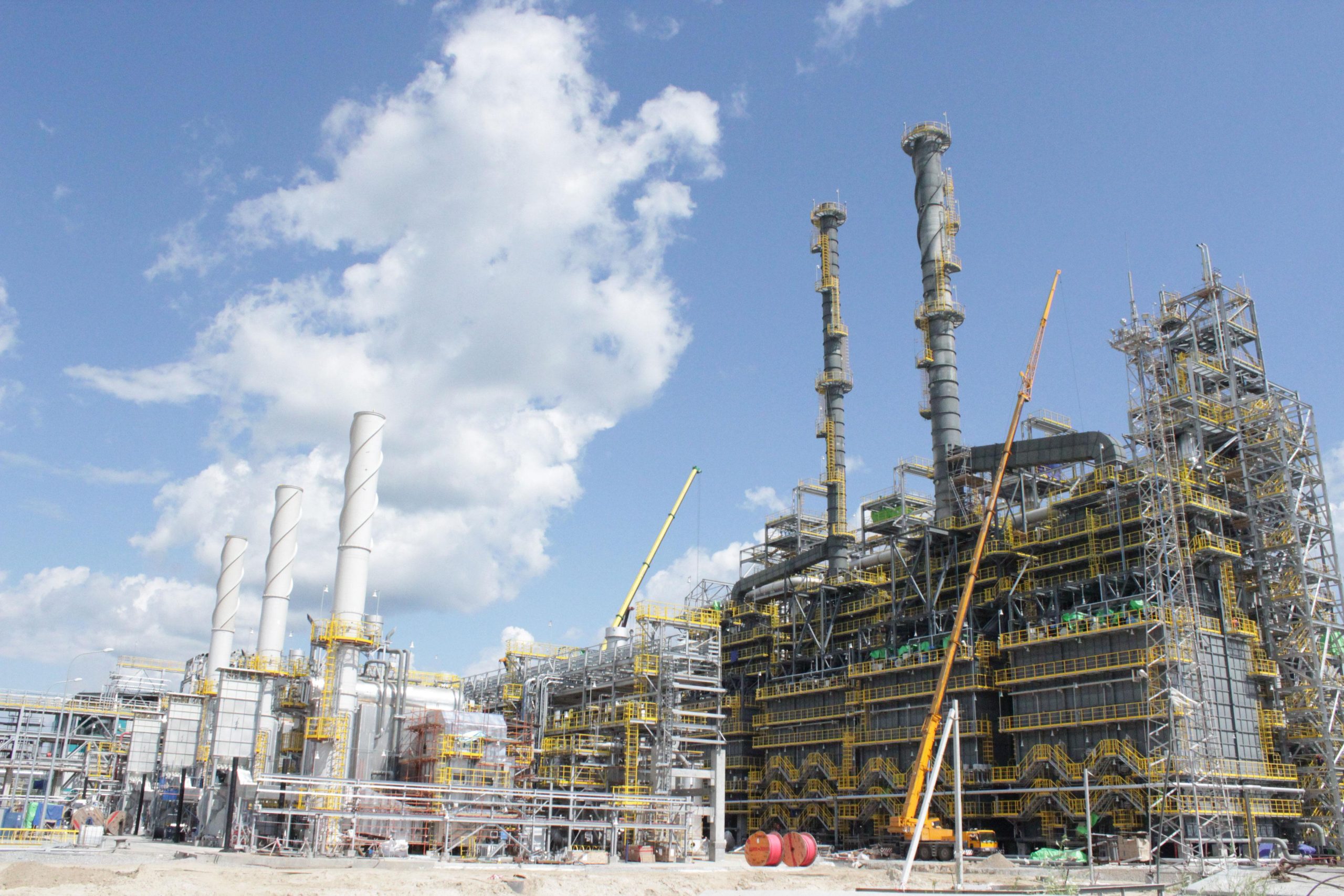 Among the members of the Commonwealth of Independent States (CIS), Kazakhstan has the 2rd largest liquid hydrocarbon fields after Russia. (ROGTEC, 2015) According to the Ministry of Energy of Kazakhstan, the recoverable natural gas reserves in the country are estimated at 4.03 cubic meters[1]. Therefore, on natural gas reserves, Kazakhstan ranks the 22th in the world and 3rd in the CIS. According to the Minister of Energy, K. Bozumbayev, the total gas production in Kazakhstan amounted to 45.3 billion cubic meters in 2015 (Kazakhstan 2050, 2016) and the oil companies of the country produced 29.9 billion cubic meters of natural gas in January-August 2016. (Committee on Statistics, 2016)

Most of Kazakhstan’s natural gas reserves or over 98% are located in the west of the country. The approximate allocation of total gas reserves is as follows: 34.5% is the Kashagan field associated gas, 23.2% are the Karachaganak field gas and 17.3% are the Tengiz field gas, the remaining part is shared between smaller deposits such as the Korolevskoye, Zhanazhol, Urikhtau, and others. (KAZENERGY, 2011) Therefore, commercial exploration of natural gas in Kazakhstan is conducted on over 70 gas, gas condensate and oil-gas fields out of 228 hydrocarbon fields. Since natural gas production at the Kashagan field would start only at the end of 2016, the first place among the companies in terms of gas production is still held by Karachaganak Petroleum Operating with 42% of the country’s total gas output. TengizChevroil holds the second place with 34% of total gas production and CNPC-AktobeMunaiGas ranks third among the leaders with 8% of total gas production.

It can be clearly seen that Kazakhstan’s gas industry has positive statistics. However, there are a number of issues that need to be addressed. For instance, the lion’s share of the Kazakh natural gas is produced in association with oil as either associated gas or condensate-related gas. To date, only over 20 deposits contain non-associated gas. This is why up to recent time gas production was an integral part of the oil producing companies’ activity. Since Kazakhstan’s economy focused on generating oil revenues, the increase of the natural gas commercial production remains secondary to the need to maximize oil output[2]. Therefore, in 2014 Kazakhstan re-injected about 18.4 billion cubic meters or 40% of its associated gas output to maintain reservoir pressure and realized only about 60% of its gross gas output as commercial volumes. (KAZENERGY, 2015)

Moreover, since gas is produced simultaneously with crude oil and condensates a significant part of the natural gas is characterized by multi-component composition and high sulfur content, which greatly complicates its exploration and processing.[3] For instance, the Tengiz and Kashagan fields’ sulfur content is about 18-19%. Therefore, before sending the gas to market it should be processed in order to remove sulfur and other impurities, which makes the production of commercial gas, which could be further delivered to consumers and enterprises, much more costly.[4]

Actually, domestic consumption of the natural gas remained relatively low accounting for only about 17.5 % of the country’s primary energy balance in 2015. One of the reasons for low level of consumption is lack of gas pipeline infrastructure in Kazakhstan. To date, a significant part of oil and gas fields in the country are not connected to Gas-supply Unique System (GUS). For instance, only 15 fields or about 7% of total amount are connected to GUS. The natural gas pipelines are presently available in 10 out of 14 regions of Kazakhstan. At the end of 2015, only 42.98% of the population of Kazakhstan has access to the natural gas supply. (Ministry of Energy of Kazakhstan, 2016)

In order to promote domestic gas consumption, Kazakhstan’s authorities decided to create the county’s single-buyer model under the responsibility of KazTransGaz (KTG) designated as national gas operator, which has rights to purchase associated gas from producers, sell gas on the local market and export gas. The main critical task of KTG is to provide 100% gasification coverage of population of the republic by reforming and complex development of Kazakhstan’s gas industry.

A major initiative toward the gasification of the country is the construction of the Beyneu – Bozoy – Shymkent pipeline with passing capacity up to 10 billion cubic meters, which will increase the energy security of Kazakhstan and allow delivering gas from the western gas production regions of the country to the southern parts. As a result, Kazakhstan could decrease its dependency on the gas supplies from Uzbekistan and Turkmenistan. The project implementation will definitely cause positive multiplicative effect expressed in gasification of the Kyzylorda, Southern Kazakhstan, Zhambyl and Almaty regions. (KazTransGaz, 2016) 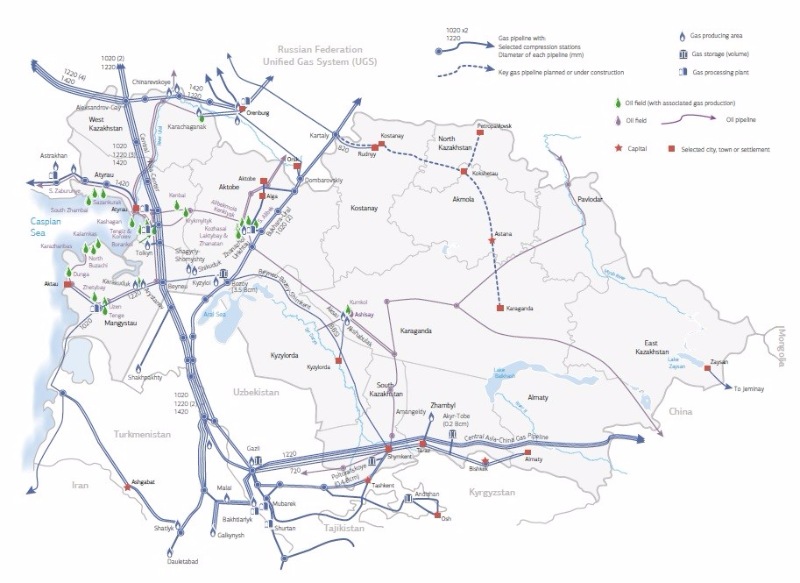 It is obvious that the dynamic growth of gas production is impossible without a developed pipeline infrastructure. Currently, the main transit lines, which are used for transit of Turkmen and Uzbek gas, are Central Asia-Center, Bukhara – Ural, Orenburg – Novopskov. Moreover, the natural gas is supplied to the southern regions of the country and the Kostanay region oblast under the SWAP-operations with the Russian gas giant Gazprom by using the Uzbek gas resources via BGA-TBA and Gazly-Shymkent gas pipelines. Moreover, the Uzbek and/or Turkmen gas is transported via Turkmenistan – Uzbekistan – Kazakhstan – China main pipeline.[5] (KazMunayGaz, 2015)

Therefore, it could be concluded that it is important for Kazakhstan to keep the gas production in 2016 at least at the 2014 volumes. Moreover, KTG should continue developing transportation routes on transit and export delivery of the natural gas taking into account the fact that because of the constantly increasing level of internal consumption and the significant volume of reinjection the gas export potential of Kazakhstan remains at the low level.

[4] The largest gas processing plants in Kazakhstan are the Kazakh, Tengiz, Karachaganak, and Zhanazhol.