On May 16, 2019, President of Uzbekistan Shavkat Mirziyoyev signed a decree on the Navoi region free economic zone. According to the decree, the entire territory of the Navoi region is declared a free economic zone where enterprises will operate without paying almost all types of taxes. Special economic regulations in the region will apply to innovative, high-tech, export-oriented and import-substituting industries until at least January 1, 2030. Enterprises that will obtain a status of a participant of the free economic zone will be exempted from paying a wide range of taxes and other payments to the state for a period from three to ten years depending on the total amount of investments. During 2019-2020, over 500 investment projects with a total cost of over $3 billion are planned to be implemented in the region creating 17.4 thousand new jobs [Rosbalt.ru].

It is worth mentioning that Uzbekistan’s practice of creating free economic zones to stimulate growth in certain priority industries is not unique in Central Asia. For example, the history of creating free economic zones in Kazakhstan began as early as in November 1990 when the law “On Free Economic Zones in the Kazakh Soviet Socialist Republic” was passed. However, all free economic zones launched in the 1990s did not last very long and failed within 2-3 years [Zakon.kz]. Currently, there are 12 free economies zones functioning in Kazakhstan where 183 projects were implemented. However, none of them achieved the targets specified before their launch, and their overall economic effect remains weak. In particular, despite substantial tax benefits and advanced infrastructure, the percentage share of private investments is less than 50% in most of the functioning free economic zones. Moreover, very few of them have at least some share of foreign investments [Expertonline.kz]. In Uzbekistan, the first law “On Free Economic Zones” was passed on April 25, 1996 and was based on generally accepted standards of other countries. Similar to Kazakhstan, the first attempts of organizing free economic zones during 1990s in Uzbekistan were unsuccessful due to a number of reasons such as a poor infrastructure, a weak legislative basis, a lack of investments, etc. [Finance.uz]. Beginning in 2008, Uzbekistan restarted this practice by launching the Navoi free economic zone.

We should bear in mind though that there are many geographic, economic, social and other factors that make Uzbekistan very different from Kazakhstan, and therefore local free economic zones can bring other results. First of all, Uzbekistan is much less extensive than Kazakhstan in terms of space, which implies significantly stronger concentration effects and a higher density of factors of production. The population density of Uzbekistan is 74.1 people per sq. km, whereas that of Kazakhstan is only about 6.7 people per sq. km [World Bank]. High density and low transportation costs, especially in the eastern and southern regions of Uzbekistan allow the industries to take advantage of the economies of scale. Uzbekistan and Kazakhstan also differ a lot in terms of overall economic diversification and relative sizes of their manufacturing industries. More than three-fourths of Kazakhstan’s exports consist of primary mineral commodities and related products, while the share of the extractive industry in Uzbekistan’s exports is not more than one third. It is also important to mention that Uzbekistan started to create many of its free zones quite recently, and many socio-economic factors that were present ten years ago are not relevant anymore. Since Shavkat Mirziyoyev became president, Uzbekistan has undergone a number of important economic reforms. Therefore, many factors allow us to expect a more positive outcome from the initiative of creating free economic zones in Uzbekistan.

Despite being the second least populated region of Uzbekistan with the population of 940 thousand people, which is only 2.9% of the country’s population, the Navoi region is rather important in economic terms and accounts for 5.3% of the national GDP. It is one of the leading regions of Uzbekistan in term of gold extraction, which makes it the wealthiest region in terms of the GRP per capita. In 2008, the Navoi region showed a 3.4% GRP growth. One of the region’s economic problems though is the low diversity of its exports, as gold mining provides over 85% of the region’s exports revenues. In fact, one of the main reasons explaining the choice of the Navoi region as a free economic zone is to give an impetus to other industries, and especially to knowledge-intensive industries, in order to diversify the region’s economy.

There are certain geographic factors that make the Navoi region different from the rest of Uzbekistan’s regions, including in economic terms. Unlike the eastern and southern regions of the country, the Navoi region is sparsely populated with only 8.4 people per sq. km, which makes it the least densely populated region of Uzbekistan. Over four-fifths of the region lies on the Kyzylkum plateau and is covered with deserts. This shapes the local economy to a certain extent because the same productive structures based on agriculture and water consuming industries that are present in other regions of Uzbekistan are costly to establish. For instance, due to a predominantly arid terrain and a lack of arable land, the share of the urban population in the Navoi region is close to 50%, whereas nationwide this figure is around 30%. So, the Navoi region is different from the rest of Uzbekistan in many ways and more similar to Kazakhstan’s Kyzylorda region, with which it has a common border of about 440 km. 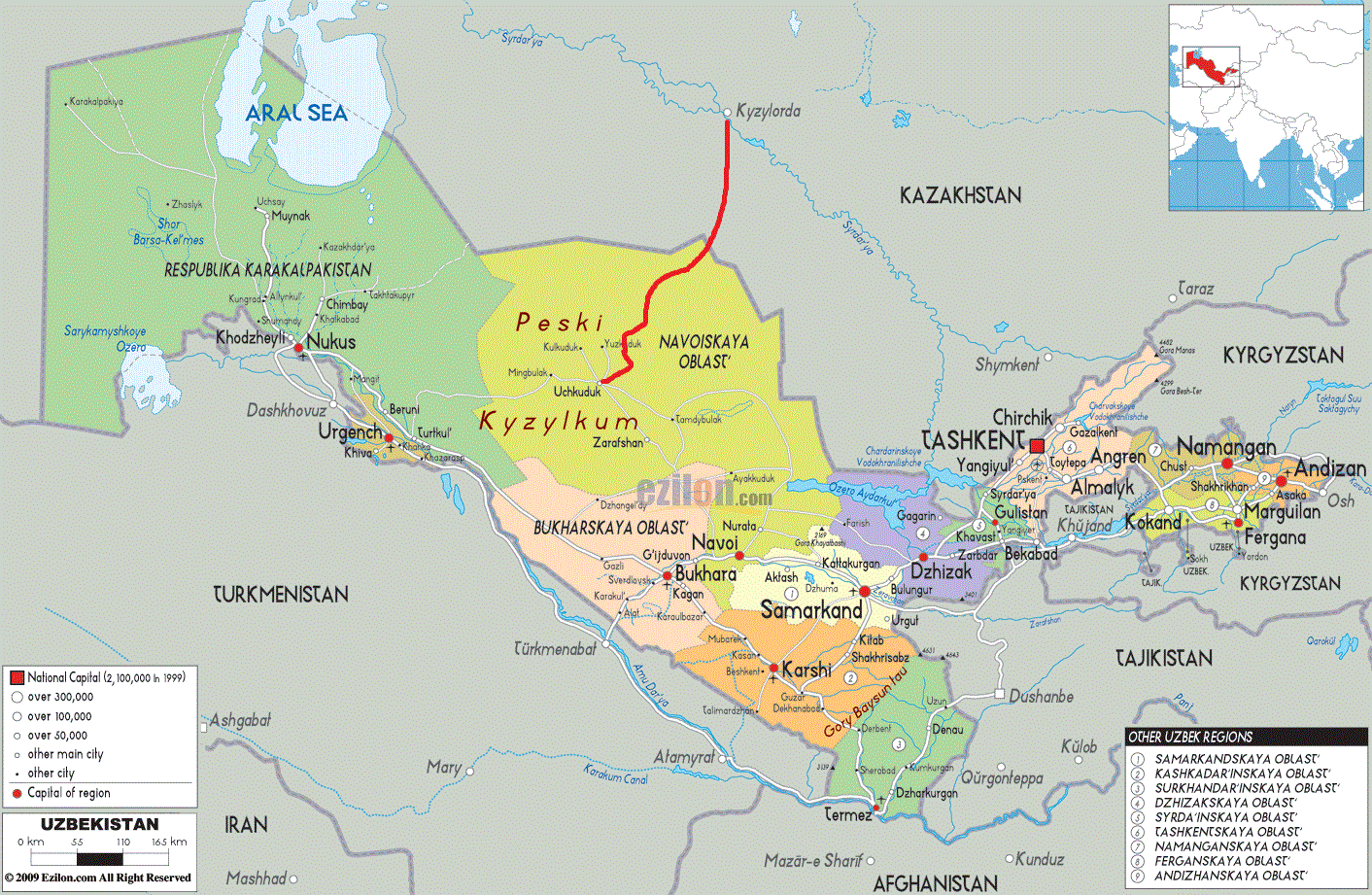 It is interesting to note that, despite the shared border, there are no any checkpoints or cross-border transport connection between the Navoi region and the Kyzylorda region. In this light, one of the options that would help to develop the two regions’ economies would be to foster interregional cooperation. For instance, a road connecting the Kazakh city of Kyzylorda and the Uzbek town of Uchkuduk would be essentially beneficial for local economic development, bilateral trade, and transport connectivity (see Figure 1). A 366-km road connecting the two locations would cost about $444 million, based on estimates of the costs of roads built in similar geographical conditions. The importance of this road would extend beyond the regional scale since it would also connect the central and northern regions of Kazakhstan with the northwestern regions of Uzbekistan and facilitate the transport connection of Kazakhstan with Turkmenistan.