Petrolization, Financialization as Sources of Wage Differentials in Kazakhstan Nevertheless, the average salary showed a real positive growth in 2018 for the first time since 2014. In 2018, all the sectors of the economy have experienced a positive growth of salaries, with the only exception of the health care and social services sector, where the average salary shrank by 3.2%. Another sector of the economy where salaries have traditionally been low is education, where the salaries increased by a mere 0.3% in real terms during the entire 2018. If we split the economy into the real sector and the service sector, the two leading sectors in each category in terms of the salary sizes will be the extractive sector and the financial sector, respectively. Table 1a) shows the change of the average salary in the economy as a whole, agriculture and manufacturing relative to the average salary in the extractive sector during 2011-2018. As we can see, during the period under consideration, the salaries in manufacturing as well as in the entire economy were decreasing relative to the salaries in the extractive sector. An average worker in the manufacturing sector earns nearly half of the salary of an average worker in the mining sector. At the same time, in agriculture, the salaries are almost four times lower than in mining, and the ratio between the two has been constant throughout 2011-2018.

Analyzing the service sector, we can note that the two top priority public sectors, which are health care and education, were in decline in terms of the average salary relative to the most lucrative service sector, which is the financial sector. In 2012, the average salary in health care constituted 40% of that of the financial sector, and this ratio went down to 33% by 2018. The same indicator for education decreased from 35% to almost 30%.

Figures 2a) and 2b) show the real growth of salaries during 2011-2018 in selected sectors of the economy. Thus, we can see that in the real sector the average salaries in agriculture and extractive sector grew faster than in the manufacturing sector. If we look at the growth of salaries in the service sector, we can notice that the two most important service sectors have experienced rapid growth initially from 2011 to 2015 compared to the financial sector that has the highest salaries. However, after 2015, we can see the reversal of the trends, and the average salaries in health care and education started to decelerate substantially compared to the financial sector that started to show a growth of salaries even faster than before. 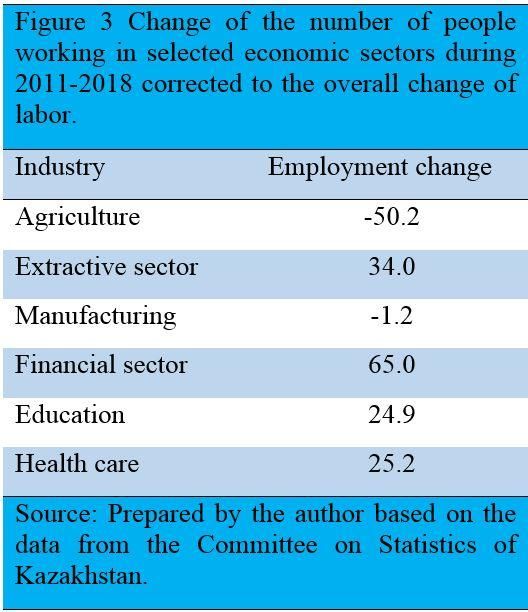 Given the necessary information on the dynamics of average salaries across sectors, it is always interesting to analyze the response of labor within the framework of fundamental laws of labor supply and demand. Under conditions of free movement of labor, we can expect a shift of labor from sectors with relatively lower salaries towards sectors with relatively higher salaries in accordance with the general rule, which states that capital moves to markets with the highest interest and labor moves towards markets with the highest wages. It is interesting to note that there are certain responses of labor towards the change of salaries. Figure 3 presents the shift of labor across the selected sectors of the economy of Kazakhstan relative to the overall change of labor by dividing the ratios of labor change in sectors under consideration by the ratio of the overall labor change in the economy. It turns out that agriculture, which has the lowest average salary among all the sectors of the economy, has lost half of its labor during 2011-2018. There is also a small decrease in manufacturing, which experienced a slightly larger increase in the average salary during the sample period. As one might have expected, the extractive sector gained more labor than any other productive sector (34%), and the labor increment in the financial sector during 2011-2018 was tremendous (65%). Surprisingly, however, the public sectors of health care and education, which experienced a slight decrease in the average salary during the sample period, attracted more labor relative to the entire economy. Both health care and education increased their labor size roughly by one quarter, which is much faster than the demographic growth since 2010 (10.4%) [Committee on Statistics, 2019a; 2019b].

The comparison of the key sectors of the economy in terms of dynamics of salaries and the movement of labor allows us to better understand current trends that might seem not so obvious and make a projection of the development of these sectors in the near future. The statistical data on average salaries in selected sectors of the economy shows that there are certain signs of convergence among industries of the real sector as well as in the service sector. In other words, salaries among the sectors approach each other. However, the extractive and financial sectors remain to be the leading industries in terms of average salaries. Moreover, after 2015 the dominance of the two most lucrative sectors over the rest of the sectors in terms of the average salary has started to grow. As a result, we can see the movement of labor from the sectors with relatively low average salaries towards the extractive and financial sectors. The revealed patterns of the wage rates and the labor market indicate the key structural problems of the country’s economy, which is the deficit of sectoral diversification and the lack of investments and capital inflow into sectors other than mining and finance. Most importantly, however, the given trends contradict the declared and prioritized policies of diversification by the government, and in longer-term perspectives the rising wage differentials will lead to the concentration of labor and capital in few sectors with high payoffs [Egov.kz, 2014]. It is also important to note that sectorial wage differences also contribute greatly to spatial and interregional differences of welfare making the oil regions of Kazakhstan much wealthier than the regions with a high share of agriculture [Ministry of National Economy, 2018]. The current dynamics of wage rates in Kazakhstan can be understood as a direct consequence of the existing structural deficiencies of the country’s economy with its overconcentration in the extractive sector. In this regard, the wage trends show that more effective measures are necessary in order to avoid the overconcentration of productive resources in the extractive and financial sectors of the economy.

Bnews.kz (2019). Miners and financiers get the highest salary in Kazakhstan. Retrieved from https://bnews.kz/ru/news/u_kogo_samie_visokie_zarplati_v_kazahstane. Accessed on 10.02.2019.