Public Perception of the “One Belt One Road” Initiative in Kazakhstan* 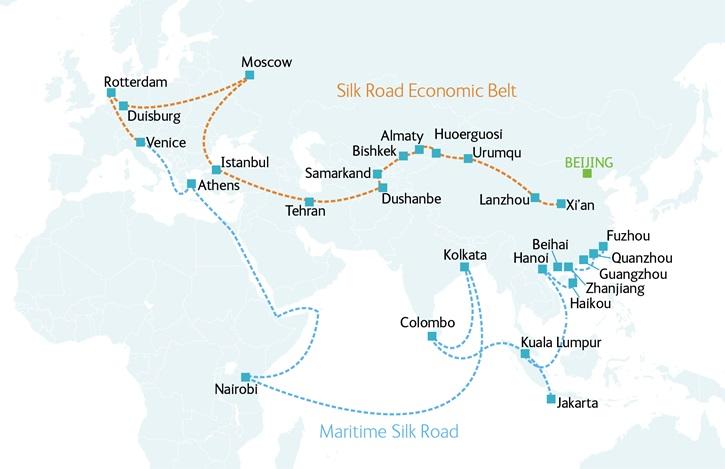 There is no doubt that in this century public opinion, empowered by the mass media, sometimes can constrain certain political and economic actions. It is the case both within and among the countries across the world. The New Silk Road Economic Belt and the 21st Century Maritime Silk Road — now known collectively as the “One Belt, One Road” (OBOR) initiative — were proposed separately by Chinese President Xi Jinping during his visits to Kazakhstan in 2013. The Chinese government issued an official document on March 28, 2015 with layout of the major principles and priorities for the OBOR. The initiative has since been extensively discussed among academics and policy-makers both inside and outside China.[1]

China focuses on how OBOR was perceived in Kazakhstan and other countries directly involved in the project and how these perceptions shaped the responses to the initiative. It is obvious that China is aware of already spread in the whole world the “China threat” thesis, which became visible after growth of China’s economic power and military capabilities. Currently China has set the task to neutralize the negative reaction abroad to the grand integrative initiative – OBOR, through formation of a positive international image of the country. One of the areas of “soft power” impact of China in the region is the education system. Chinese investments into the education sector (including scholarships), increases the acceptance of students in Chinese colleges and universities as well as sending students to study in universities of Kazakhstan, opens Confucius Institutes and actively promotes the study of the Chinese language. As a result, over the past 10 years the number of students from Central Asian countries in China increased dramatically, and Kazakhstan is a leader among them. Unlike the previous projects, the OBOR and particularly “New Silk Road Economic Belt” project is being covered as widely as possible in the Kazakhstani mass media. Chinese institutions and organizations in Kazakhstan are organizing and funding a variety of cultural (concerts, exhibitions, etc.) and scientific events (conferences, workshops, research projects), joining with Kazakhstani organizations and institutions aimed at discussion and clarification of the Chinese OBOR initiative. At the meetings of this nature both sides have a chance to make recommendations on solving certain problems together.

It is both necessary and worth examining a public perception of OBOR project in Kazakhstan, since it is the country where alarmist and sinophobic sentiments are present when it comes to the issues of migration, bilateral trade as well as the fact that China continues to purchase the shares of major western companies operating in Kazakhstan.[2] Fear of Kazakhs of the invasion of the Chinese may be called traditional, it is Kazakh proverb “Kara kytai kaptasa – akyr zaman boladi” (If the invasion of the Chinese begins, we will come to the end of the world).[3]

Several labor conflicts of a local character between Kazakh and Chinese workers occurred in Atyrau and Aktobe regions in 2010, 2013, 2015[5] – these conflicts have not been analyzed by experts and were sparingly reported in the media, which may cause repetition of the conflict and a further increase in tensions. In 2014 First Deputy Prime Minister of Kazakhstan Bakytzhan Sagintayev reported that Kazakhstan’s land will be given for rent to the citizens of the People’s Republic of China.[6] This caused several public resentments such as: public censure, formal complaints. As a result Prime Minister officially denied this information.[7] Obviously, not only the local workers of the joint Kazakh-Chinese enterprises express dissatisfaction with the distribution of financial resources between the Kazakh and Chinese workers, but the whole society, preventing potential projects as renting land from.

However, initial public perception dominating in Kazakhstan comes mainly through the public newspaper articles with wider circulation in the country. While OBOR ostensibly aimed at promoting cross-border infrastructure connectivity and further economic linkages between China and its neighbors and trading partners, its similarity with Kazakhstan’s own “Nurly zhol” program was a subject of many commentaries and analyses in mainstream Kazakhstani media.

In some papers Kazakhstan is viewed as a bridge between the East and the West and OBOR is viewed as an essential competitive advantage as the country aims to double the volume of transit along the East-West route by 2020. In this regard, the authors note that the project of “Silk Road Economic Belt” opens wide perspectives for developing trade, economic, and investment cooperation among states, in particular for Kazakhstan. Thus, to shorten the costs and the time spent in transporting the goods from China to Europe, China can use the route through the territory of Kazakhstan, which in turn can reduce the required time for transportation from 45 days to 10-14 days instead.[8] Therefore, the analytics argued that it is a clear win-win situation for both sides since it offers the construction of a multimodal transcontinental corridor which is a guarantee of a high connectivity and high standard infrastructure facilities.

More importantly, the theme of its similarity with Kazakhstan’s own “Nurly zhol” project is obviously widely covered topic.[9] And yet the Kazakhstani public opinion is still silent on this matter except for the analysts of think-tanks, observers, students of Chinese studies or international relations, and journalists. One of the major reasons for this paradox might be the absence of wider public awareness in Kazakhstan as Kazakhstani people do not possess enough and detailed information about the OBOR project, in particular Silk Road Economic Belt. Such outcome should be expected and is quite natural taking into consideration the fact that it is one of the very recent initiatives and it in turn requires some time to process the information. Consequently, there are no major sociological studies such as opinion polls, questionnaires done in Kazakhstan in assessing the public view on this matter.

Since the realization of OBOR project will allow establishing a powerful economic corridor with an enormous potential for development, journalists echoed the analyses of the reinvigoration of the existing international institutions such as SCO, EEU and even EU, thereby stating that the creation of other international institutions in the future is inevitable.[10] Some articles highlight the stabilizing effect of OBOR project, in particular Silk Road Economic Belt in Central Asia, as they argue that it presents a potential of hindering the dissemination of extremism, terrorism, and religious fundamentalism. Some think that such a scenario is possible because the implementation of Silk Road Economic Belt project will eliminate the social underpinnings that give rise to such destabilizing phenomena in the first place.[11]

Articles from mainstream Kazakhstani public newspapers discussed above foster the formation of wider public perception of the Chinese recent initiatives. The articles also imply that overall Kazakhstani public attitude on OBOR initiative is quite positive and is in line with the official position on this matter. The positive attitude is dominant in spite of the presence of sinophobic sentiments in Kazakhstan, which in turn do not have a solid ground and mostly based on myths.

Chinese OBOR initiative is without a doubt unprecedented in its scope and tasks. Some states met its proposal with great caution, whereas many of the countries that directly lie at the heart of the project, welcomed it by viewing it as the start of the new creative era of connectivity and interaction among states. Kazakhstan is not an exception in this respect since it expressed self-conscious support for this initiative by recognizing its own role as a major transit country. Moreover, the public perception in Kazakhstan, which in turn stem from the articles, analysis, and official statements presented in the state newspapers, media, and internet news sources, are in favor of the implementation of this project. Mainly they focus on the economic benefits (in particular infrastructure construction and increased trade volumes) and possible stabilizing effects of OBOR project in the realm of security. However, some observers doubted Kazakhstan’s enthusiasm by arguing that Astana’s commitment towards the Eurasian Economic Union (EEU) would not allow it to approve the project, let alone participate in its realization. However, Kazakhstan is likely to become the major contributing partner of China in its OBOR project, in particular its continental part – “Silk Road Economic Belt”. In doing so, the two regional projects – the EEU and the OBOR – can be complementary in organizing the new economic, infrastructural landscape of Eurasia. As many have noted the coexistence of Trans-Pacific Partnership (TPP) and 21st century Maritime Silk Road in the Asia-Pacific Region, the coexistence of EEU and “Silk Road Economic Belt” is quite possible. It might be the case, since both – the EEU and “Silk Road Economic Belt” – share a common goal of enhancing a free movement of goods, services, people and capital. In doing so, these two overlapping regional projects can comprise the software (EEU with its rules and regulations) and hardware (“Silk Road Economic Belt” with its highways, rail ways and bridges) of economic activities in the Eurasian continent. China alone cannot make OBOR a success, since it covers vast areas involving more than 60 countries. For China, it is a grand strategy, but to its partners, it is really a grand initiative. As an initiative, it needs the active participation and close co-operation of all related partners. Kazakhstan as a developing economy mostly accepts OBOR as mechanism of coordinating economic development strategies and policies with plans and measures on enhancing connectivity through building infrastructure networks and integrating construction plans and systems of technical standards.