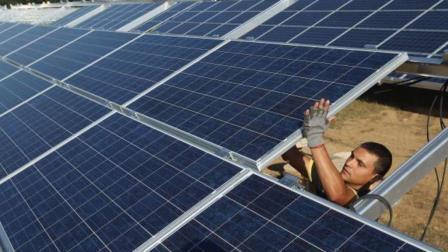 Renewable energy technologies have become more efficient in the recent years, and as a result, more economically feasible. Renewable energy sources have always been appealing in terms of overcoming the effects of greenhouse gas emissions caused by coal-fired power plants. However, despite the environmental friendliness, investors were hesitant to fund green technology projects due to the uncertainty of timely returns. However, nowadays, due to the improved technologies, the risks associated with investing into this type of green energy has become more effective.

Recently, solar energy production has become more efficient and less costly. Besides, solar energy is the fastest growing renewable energy type. Global solar generation rate increases by 8.3% annually (EIA, 2016). For instance, in 2015, solar photovoltaic capacity increased by 45-50 GW (IEA, 2016). Levellized cost of electricity (LCOE) of solar photovoltaic have decreased almost six-fold in the last ten years, which made solar energy more attractive than fossil fuel energy in a number of countries making it more appealing to install renewable energy source capacities, such as solar and wind than coal capacity. So, energy production via solar photovoltaics used to cost around $600 MWh ten years ago. This number decreased two times down to $300 MWh five years later. Nowadays, the cost of solar energy is equal to or below $100 MWh. As for the traditional energy cost, the average global LCOE has been stable at $100 MWh for over a decade. Based on these numbers, it can be concluded that grid parity[1] has been reached in a number of countries around the globe. Over 30 countries in the world such as Chile, Mexico, Brazil and Australia have reached grid parity. Meanwhile, nowadays, wind LCOE equals to $50 MWh (WEF, 2016).

Moreover, solar radiation has a great potential of being used for heating. Heating via solar energy increased by 7% in 2014. Nevertheless, solar heating amounted to less than 1% of the global heat demand (IEA, 2016). Chinese and the European markets are the largest ones in terms of solar heating. Moreover, in 2014, despite the slow-down in the global economy along with the low fossil fuels prices affected the halt in the development of solar heating, a rapid development in introducing solar thermal water heating was noticed in Turkey (IEA, 2016). Table 1 gives an overview of some solar heating projects around the globe that have already been introduced or are in the process of implementation.

Renewable energy capacity is site specific as it depends on such factors as wind speed, the amount of solar radiation and the amount of sunny days and hours. In this light, the main disadvantage of solar and wind energies is the intermittent nature of these types of green energy, making them additional energy sources. In this light, energy batteries that are capable of storing large amounts of energy have been intensively developed. Battery costs have also decreased in the last years. So, the cost of batteries decreased from $1000 kWh down to $350 kWh in the period of 2010 to 2015 (WEF, 2016). This decline in the cost of batteries is mainly associated with the development of environmentally friendly electric vehicles. For instance, in 2015, the amount of electric cars on the roads reached 1.15 million. It is planned to increase this number up to 20 million by 2020. In 2015, the majority of electric vehicles were sold in China, followed by the U.S., the Netherlands and Norway. These four countries are accountable for 70% of electric cars sold around the globe that year (IEA, 2016).

According to IRENA, it is predicted that the cost of photovoltaic modules might fall even further by 57% in the period of 2015-2025. Consequently, this would lead to the reduction of LCOE of solar photovoltaic energy by 59% during the same period. So, by 2025, project costs would reach $0.03-0.12 kWh. As for the concentrating solar power, the installed costs might decrease by 33-37% by 2025. LCOE is to reduce by 26% for onshore wind energies in the next ten years, while the offshore wind energy cost might decrease by 35% by 2025 (IRENA, 2016).

Growth of solar energy development is expected in the Organization for Economic Cooperation and Development (OECD) countries, the strongest growth anticipated in the U.S., Chile, Japan and Mexico. As for the non-OECD countries, the strongest development is expected in China (IEA, 2016). Over 30 countries around the globe have set solar energy targets that are due in 2020. The combined target of all these countries is more than 350 GW. The top six countries (Germany, Italy, Japan, Spain, France and China) were responsible for 76% of total solar PV capacity and according to the national energy plans, are planned to be accountable for 61% by 2020. However, it is worth mentioning that the target numbers do not necessarily show the actual potential of the market and are subject to change. So, for instance, in 2015, India increased the target number for 2022 from 20 GW to 100 GW (EIA, 2016).  At this rate, by 2020, solar energy is expected to be more attractive than the traditional energy generation throughout the entire world (WEF, 2016).

To conclude, improvements in green energy technologies highlighted in this analysis show that environmental sustainability and economic growth both can be achieved by developing new technologies and adopting realistic yet green energy targeted national energy plans.