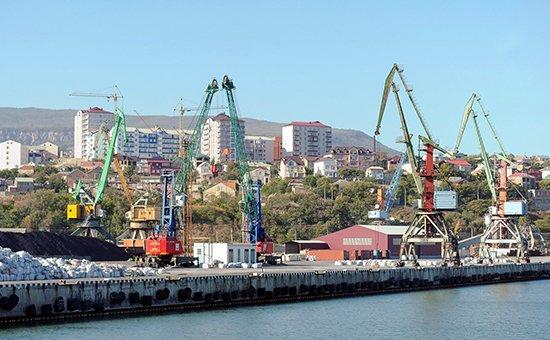 The Makhachkala seaport was the busiest Russian port in the Caspian basin right up to the recent changes in the oil transportation flows in the region. Until recently, the seaport has accounted for more than a half of the total cargo throughput of Russia’s seaports in the Caspian Sea on average. For instance, in 2016, the cargo turnover of the Makhachkala seaport amounted to 3.3 million tons, which accounts for 53.8% of total cargo flows via the Russian ports in the region. As for 2015, the cargo throughput via the port reached 3.8 million tons or 56.7% of total cargo traffic through the Russian Caspian seaports. However, the situation dramatically changed in 2017. In January-May 2017, the cargo traffic via the Caspian port dropped by 71.3% totaling 0.4 million tons (Finam, 2017), which accounts for 30.7% of total cargo turnover. 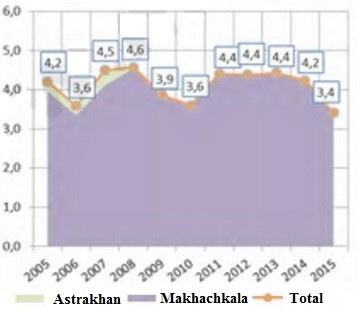 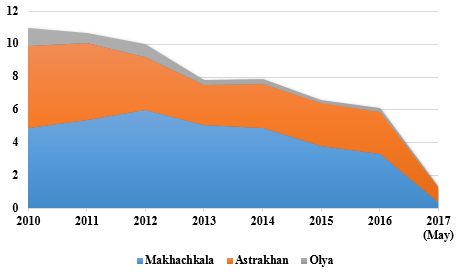 Source: Infrastructure of Marine Oil Terminals of Russia in 2016. (http://www.morproekt.ru/testblog2/981-infrastruktura-morskikh-terminalov…)

In fact, in January 2016, the Russian state oil pipeline operator Transneft declared that the requirements for the quality of the oil delivered via Makhachkala’s oil terminal Dagnefteprodukt would be tightened. According to the new requirements of Transneft, the sulfur content in the transit oil should not exceed 0.6%. However, the Kazakh oil of the Buzachi group of fields is typified by a higher sulfur content, which is over 1.8-2%. As a result, the oil produced at the Buzachi group of fields could no longer be transported via the pipeline system of Transneft, namely, through the Baku-Novorossiysk pipeline with further shipping from the Novorossiysk seaport to the European market.

Indeed, this is not the first time that the authorities of the Makhachkala seaport lose their customers. Until recently, the seaport facilities were used for transporting oil produced at the offshore deposits in the Turkmen sector of the Caspian Sea. However, in June-July 2016, a number of energy companies such as United Arab Emirates’ Dragon Oil and Austria’s Mitro Internation refused to transit oil from Turkmenistan via Makhachkala. Moreover, in 2017, Russia’s energy company Lukoil redirected its offshore Caspian oil from the Vladimir Filanovsky and Yuri Korchagin fields via the Caspian Pipeline Consortium pipeline (CPC) through subsea pipelines instead of transporting it by shuttle tankers to onshore facilities of the Makhachkala seaport.

It is worth to highlight that the decision of the Russian and foreign hydrocarbon producers to refuse to work with the seaport has nothing to do with the fall of prices in the global market or with geopolitical instability. The key reason for this decision is objections in respect of the Dagnefteprodukt oil terminal operation. For instance, in June 2016, Transneft published an official statement that accused the authorities of Dagnefteprodukt of abuse of power and corruption. In fact, over the past few years the ratio of oil loss, which according to the international standards, should not exceed 0.2%, registered during pumping liquids from tankers to Dagnefteproduct storages have shown a steady increase. The ratio was as high as 0.69% in 2013, 0.84% in 2014, 0.44% in 2015 and 1.43% in 2016. As a result, the actual level of oil losses at the Dagnefteprodukt terminal is seven times higher than the maximum possible level. Moreover, there are still concerns over the fact that the content of chlorides and water in oil leaving the Dagnefteproduct terminal used to exceed the norm. (Semyonov, 2017) Therefore, it is not surprising that oil producers prefer to cut oil shipments via Makhachkala redirecting oil flows to Baku.

Understandably, the seaport administration is in search of possible options for improving the cargo turnover and restoring the reputation of the Makhachkala port as a reliable transport hub. Indeed, the seaport leadership repeatedly stated its intention to accelerate the process of privatization of the port’s facilities in order to give an additional impetus to the development of cargo terminals and modernization of related infrastructure. According to the optimistic scenario presented in the Strategy for the Development of the Russian Seaports in the Caspian Basin and Related Access Railways and Automobile Roads until 2030, the recovery of oil supplies via the seaport will allow increasing the hydrocarbon cargo traffic to 10 million tons per year by 2025. However, this scenario can be implemented only if the following conditions are fulfilled: 1) Kazakhstan and Turkmenistan will increase the oil transportation via the port to 4 million tons; 2) Russia and Kazakhstan will start commercial production of oil at the Tsentralnoye field in the Caspian Sea and all extracted oil will be shipped through Makhachkala; 3) Russia and Iran will conclude a swap deal of 2 million tons of oil per year. (Ministry of North Caucasus Affairs, 2017) Under these circumstances, there is no guarantee that the seaport will maintain its focus on transportation of liquid bulk cargo.

As a result, there are some signs that the Russian authorities are planning to take a number of measures towards a reorientation of seaport-related activities so it could be used for alternative purposes. Firstly, since the Makhachkala port is the base of the Caspian Flotilla the Ministry of Defense of Russia has already announced its claims to expand military infrastructure in the port. In order to implement the aforementioned plans terminals of the seaport and facilities located on its the territory required for the Caspian Flotilla are supposed to be moved northwards or dismantled. Secondly, in January 2017, the construction of a harbor for cruise ships, yachts and passenger boats was introduced to the Makhachkala port development concept. In fact, during the St. Petersburg International Economic Forum held on June 1–3, 2017, the First Deputy Minister of the Ministry of North Caucasus Affairs of Russia, Odes Baysultanov, reported that the traffic flows via the Makhachkala seaport could be refocused on internal passenger traffic. The opportunity for the seaport development becomes more probable given the possible construction of a new Caspian deep-water seaport in the city of Kaspiysk located 18 kilometers southeast of Makhachkala. It is planned that since the new port will receive the status of the intermodal hub, the lion’s share of the Caspian cargo turnover of Russia including liquid cargo will be redirected via the Kaspiysk seaport. Therefore, there is a high likelihood that the Makhachkala port would face a new competitor for the Caspian cargo turnover, which could provide better options for cargo transshipment.

In conclusion, it should be admitted that limitations regarding its further development such as a lack of territory for additional terminal construction, as well as inability to provide maritime services for vessels with high deadweight leave the Makhachkala port with quite uninviting prospects. Together with concerns over the corruption incidents at the Dagnefteproduct terminal, it is unclear how the seaport could contribute to the further growth of cargo turnover in the Caspian Sea. However, the situation could change in a positive direction in case Russia boosts trade turnover with Iran and India through the North-South Transport Corridor via the Caspian Sea.

Ministry of North Caucasus Affairs. (2017). Strategy for the Development of the Russian Seaports in the Caspian Basin and Related Access Railways and Automobile Roads until 2030.Retrieved from chrome-extension://oemmndcbldboiebfnladdacbdfmadadm/http://www.minkavkaz.gov.ru/upload/iblock/5fb/proekt-rasporyazheniya.pdf