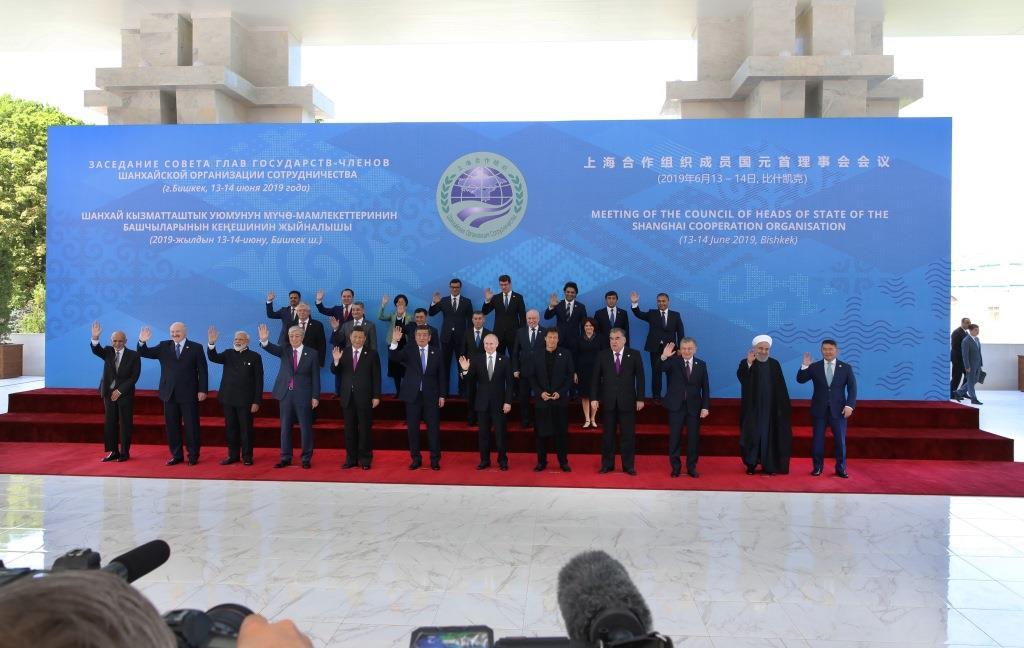 Annual Shanghai Cooperation Organisation (SCO) summit held from 13-14 June 2019 in Bishkek, Kyrgyzstan. It was the 19th summit of the Eurasian major institution since its establishment and the 2nd meeting in an enlarged Council of heads of state. This also was the first trip abroad of Kazakhstan’s President Kassym-Zhomart Tokayev after his inauguration. The summit was held against the backdrop of the deepening of the United States pressure on many SCO countries. Thus, the U.S.-China trade war is gaining momentum. The United States and Iran relations experience a serious escalation of the diplomatic conflict. On the first day of the summit, Washington accused Iran of a “blatant attack” on two tankers in the Gulf of Oman, calling for abandoning nuclear weapons [BBC, 2019]. Although recently the UN Security Council approved the Iranian nuclear program. The leaders of the SCO, which include Russia, China, Kazakhstan, Kyrgyzstan, India, Pakistan, Tajikistan, and Uzbekistan – also reaffirmed their commitment to the Joint Comprehensive Action Plan, commonly known as the Iranian nuclear deal and criticized protectionist tendencies in trade. Also, the United States urges India not to buy military equipment from Russia [Press Trust of India, 2019]. At the summit, Vladimir Putin said that Russia’s relations with the United States are degrading, while the trade turnover with China increased by $100 billion [Lentra.ru, 2019]. Thus, in the face of growing U.S. sanctions on Russia, the SCO is particularly relevant for Moscow as a part of its pivot to the East.

The organization acts as a platform for building a joint strategy to counter the United States’ pressure. However, the members of the Council have no experience of multilateral cooperation composed of such mixed countries as Central Asian states and Eurasian giants. Moreover, some countries have fundamental contradictions in relations like India and Pakistan border issue. There are differences in the idea of connectivity being put forth by different SCO members. While India has made its opposition to Belt and Road Initiative, clear, all other SCO members have embraced the Chinese project. Probably in this regard currently the bilateral format within the SCO framework prevails in significance [Kapoor, 2019]. However, against the background of joint threats, even disagreements within the organization’s member states are not as important as the ability to adhere to the SCO pole in order to preserve a multipolar world. The SCO member states maintain global regionalization and the SCO as a permanent mechanism for integration in Eurasia, which is introducing a new scenario for world order dynamics and international relations’ system update. Meanwhile, the SCO is an institution on cooperation with a particular emphasis on security; only 7% of the 1,500 documents signed within the SCO concern the economy and trade.

In Bishkek, twenty-two documents including declaration were signed during the summit. One of the first paragraphs of the declaration marks the SCO as a platform for the formation of a polycentric world [SCO Bishkek Declaration, 2019]. Within the framework of the summit, a business forum “SCO: expanding the boundaries of cooperation” was held, at which the need for the early establishment of the SCO Development Bank and settlement in national currencies was expressed again. Meanwhile, calculation of Russia and China commodity turnover still estimates 83,1% in dollars and euro, 16,9% in yuan and rubles [RBK, 2018]. A UN official representative took part in the meeting of the SCO heads of state for the first time. Earlier, on November 27, 2018, a meeting of the “UN and SCO: cooperation in the name of strengthening peace, security and stability” in New York was held; it was decided that the resolution of the UN General Assembly “Cooperation between the UN and the SCO” should be adopted. Since its founding, the SCO has based its principles on the UN Charter and currently continues to advocate strengthening the role of the UN Security Council in the international arena. Thus, in addition to the presence in SCO membership of 2 permanent members of the UN Security Council of China and Russia, the participation of such major Eurasian countries as India, Iran, Pakistan and the hot spot of the region – Afghanistan sets a new agenda for the SCO – closer and institutional cooperation with the UN. This cooperation and the implementation of a joint long-term action plan can lead to significant changes in the functionality of an organization, which is often questioned by experts, it even was called as an amorphous organization. However, summits are held annually with the participation of all included countries, member states, observer countries and dialogue partners, which emphasizes the common interest of countries in the development of this institution of cooperation.

Without question, the principle of non-interference in internal affairs proclaimed as one of the main foreign policy doctrines of China and put forward by Beijing within the SCO framework, is unanimously supported by all members of the organization. Thus, none of the Turkic countries of the organization’s members criticized China’s policy towards the Turkic Muslim minorities in Xinjiang. Moreover, such members of the organization of various status as Russia, Belarus, Pakistan, Syria, Tajikistan, and Turkmenistan supported this so-called anti-terrorism policy, speaking up for Beijing before the final session of the UN Human Rights Council on June 12 in Geneva on the eve of the summit [Putz, 2019]. Earlier, the leaders of Kazakhstan and Kyrgyzstan called the policy of Beijing in Xinjiang an internal affair of the PRC. For the countries of Central Asia, it is an opportunity to come to the table with the largest players in Eurasia, to enlist the support of main neighbors like China and Russia in the case of various geopolitical threats or storms. Maintaining stable relations with China and other central players of Eurasia through the SCO mechanism is a priority for the states of Central Asia.

In general, the 2019 summit reaffirmed the commitment of the Qingdao Declaration, which comprehensively reinforced the position of the SCO countries to promote stability in the region in the face of threats of instability and uncertainty in the world through multilateral cooperation. Despite the growth of various kinds of contradictions and tensions between countries, the SCO agenda remains unchanged; the organization is in pursuing maintaining stability in the region and developing a response to joint threats.

Putz, Catherine (2019). Which Countries Are For or Against China’s Xinjiang Policies? Retrieved from https://thediplomat.com/2019/07/which-countries-are-for-or-against-chinas-xinjiang-policies/. Accessed on 16.07.2019.