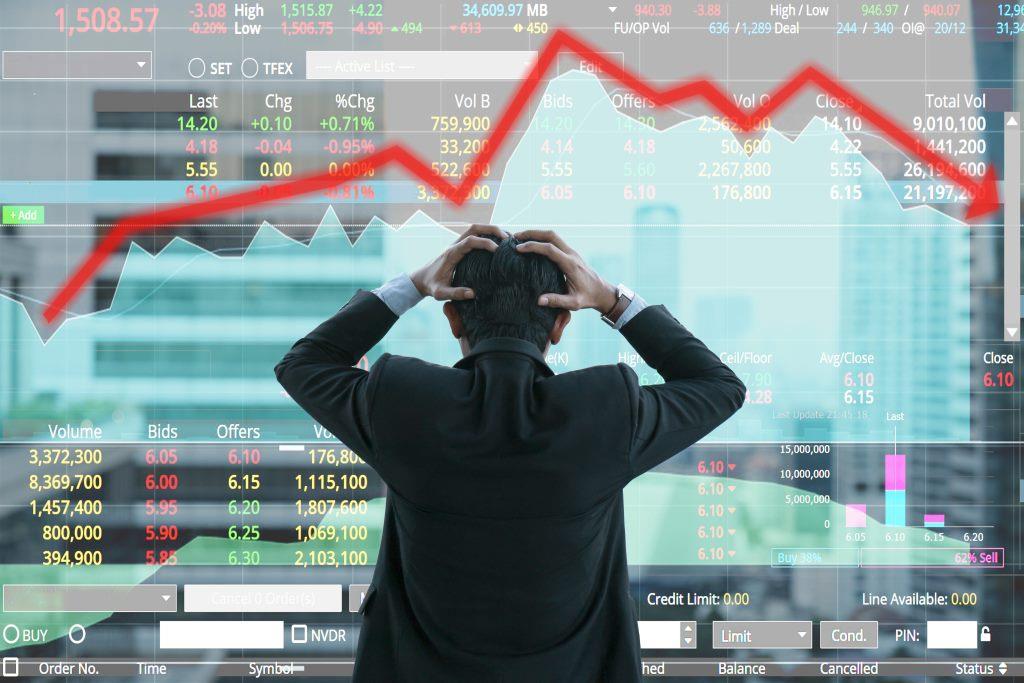 According to the latest report by the Ministry of National Economy of Kazakhstan, during January-October of 2018, the real GDP growth of Kazakhstan reached 4.1% [1]. Significant growth rates are present in manufacturing (5.4%), mining (4.6%) and construction (4.1%). The growth rate in agriculture reached 2.5% whereas the service sector presented a 4.0% growth. The inflation rate during the last 12-months period amounted to 5.3%, which is the record low for the last three years. There is also a considerable growth of foreign trade by 21.6% with 28.2% of the growth in exports and 10.8% of imports. The reported unemployment rate of 4.8% and 3.5% increase of the real income during the January-October of 2018 gave more reasons to the Ministry for a positive evaluation of the general economic situation and expectations by the end of 2018.

The report of the Ministry is indeed compatible with the targeted annual growth of 3.8% and above the world average economic growth rate of 3.1% projected by the World Bank [2], which makes us believe that the key macroeconomic indicators fit the short-term economic expectations. However, the signs of growth are not satisfactory if to compare the current state of the economy with the objectives declared 5-6 years ago and become obsolete if we contrast the implemented structural changes with the declared ones. If we base our perceptions of the economy on the fact that Kazakhstan is a middle-income developing economy, the declared current macroeconomic indicators as well as the structure of the growth model of the economy are incompatible in long-term perspectives.

The Country Economic Memorandum by World Bank [3] published in November of 2018, which provided a profound analysis of the current economic performance of Kazakhstan focusing on macroeconomic analysis of productivity and growth, predicted a deterioration of macroeconomic indicators and decline in income per capita rate if serious structural changes in the economy are not implemented. The analysis can be summarized in a few statements that disprove the general way in which the economic performance of Kazakhstan over the last two decades is understood by many. Firstly, despite the swings and significant upward shifts of nominal income per capita, the key source of the growth of income, which is labor productivity[1], was down sliding. Indeed, as we can see it from Figure 1a), there has been a significant downward shift in labor productivity due to falling prices of oil. However, if we focus solely on the GDP per capita size the downshift is not so clear. On the other hand, the dynamics of labor productivity growth is a more precise tool reflecting the well-being of an average household. It is also interesting to note that in this sense labor productivity growth and the index of GDP per capita match pretty well. 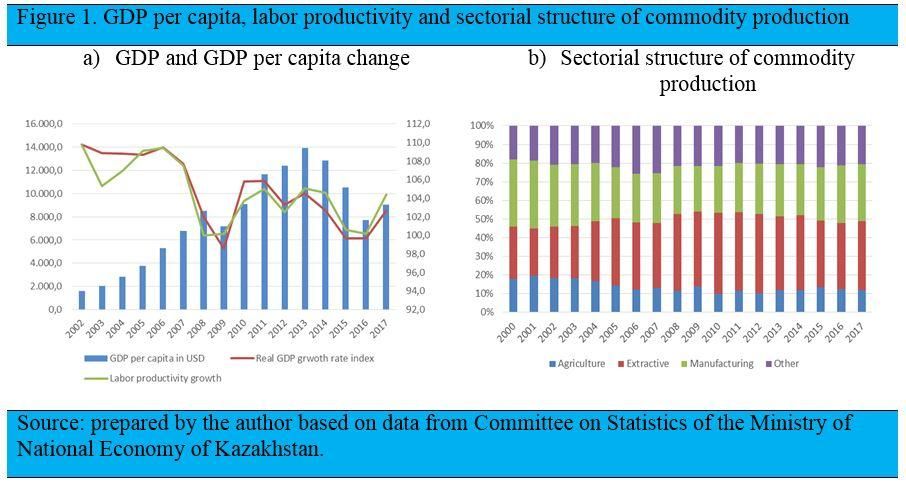 The third and most crucial statement that can be retrieved from the report is the unfeasibility of any economic growth without significant growth of the labor productivity. In order for that to be accomplished under current economic circumstances, the World Bank specifies a strikingly high level of investments of more than 50% of GDP in order to reach 2.5% of annual growth in 15 years while the current investments in gross terms is 27.3%. In fact, the labor productivity of Kazakhstan varied greatly since the early 2000. The fluctuations of labor productivity can be explained by the swings of the prices of oil, which became more and more important for the economy and exports especially in early 2000s, the small size of the economy in terms of GDP, and rapid changes in the structure of the economy. In 2016, Kazakhstan ranked 69th among 190 countries in terms of labor productivity measured as GDP per person employed. The crisis of 2008 and a sudden downturn in oil prices that followed caused a serious slowdown in the growth of labor productivity bringing it nearly to 0% during 2008-2009. This fact the weaknesses of the growth model based on oil exports and made the government to take measures aimed at developing non-mineral sectors of the economy focusing on labor productivity. The initial intentions of the government aimed at increasing the labor productivity and implementing industrial diversification were stipulated in “Strategy of Industrial and Innovation Development of Kazakhstan for 2003-2015” launched on 17 May 2003 [4]. However, unforeseen external shocks of 2008-2009 did not allow the full implementation of the industrialization after 2010. The poor results of diversification and near 0% growth of labor productivity after 2008 led to a failure of the strategy in terms of enhancing the labor productivity growth.Secondly, since the early 2000s, there has been no significant change in the industry of Kazakhstan towards higher value-added products. This statement can be split into two components: the complexity of the tradable commodities produced by the economy and the industrial diversification. According to the report of the World Bank [3], Kazakhstan not only did not upgrade its level of tradable commodities in terms of research intensity and technological complexity but also even downgraded it. In other words, Kazakhstan on average has lost the significant part of its sophisticated industries during the last two decades. At the same time, the share of the extractive sector rose dramatically during the 2000s reallocating a significant part of the productive resources and investments from more sophisticated sectors to the oil industry. In other words, there has been little success in implementing measures aimed at industrial diversification. This pattern can be easily seen from Figure 1b), where the percentage shares of the main sectors of commodity production are shown over 2000-2017. As we can see, the share of manufacturing was contracting during 2000-2007 while the share of the extractive sector was gradually increasing. Since then, however, the proportions are relatively stable with only a slight increase in the manufacturing sector since 2015.

The current framework that targets growth of labor productivity is the “State Program of the Industrial and Innovative Development of the Republic of Kazakhstan for 2015-2019”, which is, in fact, a conceptual continuation of the previously implemented programs [6]. It targets 40% increase in labor productivity in the manufacturing sector. The given program is being implemented with moderate success in this regard. Thus, during 2015-2017 the overall labor productivity has grown at 0.6%, 1.8% and 4.4% in annual terms respectively. However, this positive trend can also be attributed to the recovery of oil prices. According to the last year’s report by the Ministry of Investment and Development, the share of the manufacturing sector in GDP in 2017 reached 11.2% while the share of the manufacturing sector in commodity exports amounted to 32.1%. In very short-term perspectives the dynamics of labor productivity can be considered as satisfactory. However, it is worth mentioning that even 4.4% labor productivity growth is twice as low compared to its growth in early 2000 and is even lower than in 2014 when oil prices dropped dramatically. Most importantly, in longer-term perspectives it gives no significant advantage over the rest of the world meaning that the income per capita growth rate will be near 0% relative to the world average. The dynamics of the real GDP growth of Kazakhstan in relative terms to the world average is shown in Figures 2a) and b) below. The convergence of the real GDP growth rate of Kazakhstan to the world average is over the period since the early 2000s implies gradual deceleration of the income level growth to the point where it does not change relative to the world average or even goes below that.

Despite certain positive macroeconomic signs of economic growth slightly faster than the world average, the current model of growth shows significant weaknesses in providing robust economic growth significantly higher than the world average in long-term perspectives. The labor productivity growth, which is a more precise indicator that shows real changes in the income of households, has been largely decelerating after the downshift in 2008. Posterior recoveries of oil prices did not lead to proportionate recoveries of the labor productivity growth, which is a clear sign of limitedness of the existing economic growth model of Kazakhstan under current conditions. We can observe that over the last 3-4 years period there is a significant acceleration of GDP growth in developed economies whereas the opposite process is going on in many developing economies causing a divergence in income around the world. In 2017, the world GDP growth climbed above 3.0% for the first time since 2011, which means that there is an expansionary cycle of the world economy in general. At the same time, we can observe that economic growth in Kazakhstan is approaching the world average.

[1] – Speech by Suleimenov T.M at the meeting of the Government on the basis of the ETS of the Republic of Kazakhstan in January-October 2018, 13.11.18, retrieved from http://economy.gov.kz/ru/pages/vystuplenie-suleymenova-tm-na-zasedanii-pravitelstva-po-itogam-ser-rk-za-yanvar-oktyabr-2018-g accessed on 17.11.2018.

[4] – “Strategy of Industrial and Innovation Development of Kazakhstan for 2003-2015”, available at http://mid.gov.kz/ru/pages/strategiya-industrialno-innovacionnogo-razvitiya-respubliki-kazahstan-na-2003-2015-gody-0, accessed on 01.11.2018.