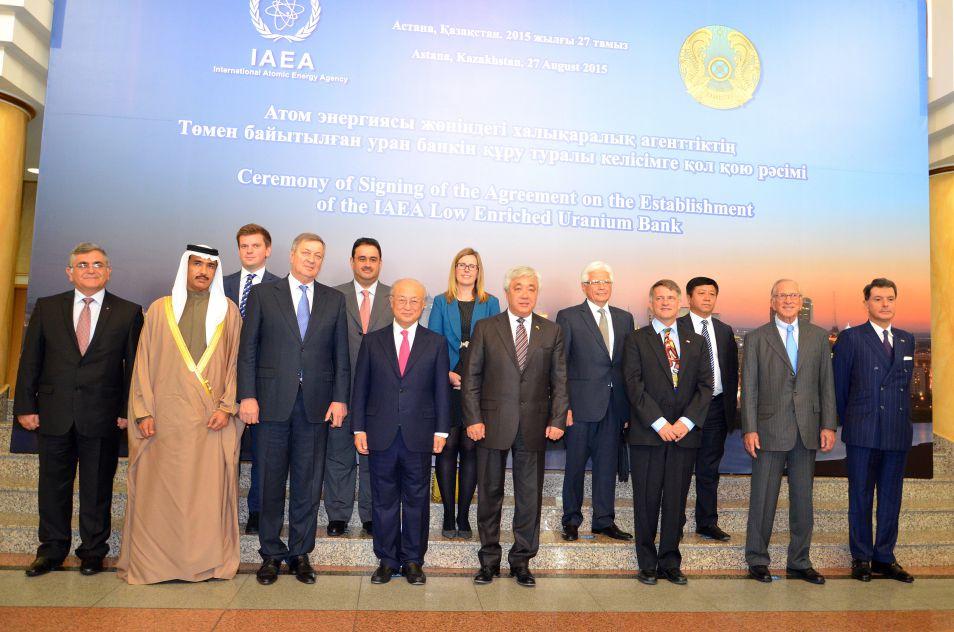 Speaking on March 6, 2017 to the Board of Governors of the International Atomic Energy Agency (IAEA), Yukiya Amano, IAEA Director General, announced that the IAEA Low Enriched Uranium (LEU) Storage Facility in Kazakhstan was scheduled to be constructed and launched by September 2017 (Amano, 2017). When put into operation, the LEU storage facility (also known as the LEU, or nuclear fuel, bank) will host a reserve of LEU, which is a basic component of nuclear fuel for civilian reactors. The bank will provide IAEA member states with guaranteed access to nuclear fuel in case they cannot obtain LEU on the global commercial market or through any other legitimate means. The LEU facility is considered to be an assurance of supply mechanism of last resort and is not intended to disrupt free market competition nor limit rights of IAEA member states to peaceful uses of atomic energy. To have access to this non-discriminatory mechanism, member states must be in full compliance with their nonproliferation obligations.

In recent years, establishing equitable multinational control of the nuclear fuel cycle has been high on the international agenda due to the continuing development of nuclear energy and efforts to strengthen the nuclear nonproliferation regime. While every state has an inalienable right to develop peaceful atomic energy, there is an increased risk that fuel-cycle capabilities could be used by some nations or subnational groups to divert sensitive nuclear technology and materials to military purposes. Understanding security risks stemming from such a diversion, the international community has been searching for innovative solutions that, combined with a traditional system of nonproliferation safeguards, will help address nuclear power needs and at the same time enhance the global nuclear security system.

One of several multilateral approaches to the nuclear fuel cycle under consideration was a proposal by the Nuclear Threat Initiative (NTI), a U.S. nongovernmental foundation dedicated to reducing threats from nuclear, radiological, biological and chemical weapons, to create an international nuclear fuel bank under the auspices of the IAEA. The NTI proposal gained momentum in September 2006, when American business magnate Warren Buffett made an initial $50 million contribution for the fuel bank plan. Subsequently, the United States, Norway, the United Arab Emirates, the European Union, Kuwait and Kazakhstan made financial contributions of approximately $100 million, thus helping to raise additional money necessary to establish and operate the LEU bank (NTI, 2017). A total of $150 million provided by the donors is estimated to cover costs for the first 10 years of LEU bank’s activities, while no funds from the IAEA’s regular budget will be allocated for this purpose.

Kazakhstan announced its willingness to host an international nuclear fuel bank in April 2009. President of Kazakhstan Nursultan Nazarbayev made this initiative public speaking at a joint press conference with visiting Iranian President Mahmoud Ahmadinejad in the Akorda presidential residence in Astana. As Nazarbayev stated, Kazakhstan would be an appropriate place for such a depository: “If such a nuclear fuel bank were to be created, Kazakhstan would be ready to consider hosting it on its territory as an NPT signatory and as a country that voluntarily renounced nuclear weapons” (Akorda, 2009). In December 2010, the IAEA Board of Governors authorized the opening of the LEU bank, and in July 2011 Kazakhstan officially offered to host the bank. For the following four years, the IAEA and Kazakhstan negotiated the LEU bank’s legal framework and technical details, and in August 2015 the parties signed a host state agreement, governing the establishment and operation of the bank. In accordance with the agreement ratified by Kazakhstan in December 2016, the LEU Bank will be owned and controlled by the IAEA, and Kazakhstan will be responsible for the maintenance, safety and security of the facility. The bank will be located at the Ulba Metallurgical Plant in Oskemen and store a physical reserve of up to 90 metric tons of LEU, sufficient to run a 1,000 MWe light-water reactor (IAEA, 2017).

The key factors that determined the choice of Kazakhstan as the host of the LEU bank include the country’s international reputation, strong nonproliferation record, existing nuclear infrastructure, and strategic relations with the major powers. These factors translate into a number of benefits that the project would bring for Kazakhstan. First of all, hosting the LEU bank would enhance the nation’s reputation as an active proponent of the international nonproliferation regime and emphasize Kazakhstan’s increasing role in global affairs. Second, by hosting a strategic facility of international significance Kazakhstan would create additional guarantees for the country’s independence and sovereignty. Third, as Kazakhstan is determined to become one of the leaders of the world’s nuclear power industry and seeks to produce domestically higher-end, value-added nuclear products rather than just natural uranium, this unique project will give a certain boost to the development of the country’s existing and potential nuclear industrial capabilities, including the construction of uranium conversion and fuel assembly production facilities.

The major question now is how well Kazakhstan is prepared to meet possible challenges associated with serving as a host of this sensitive facility which, if not properly operated, maintained and secured, may pose a significant risk in terms of nuclear safety and security. First of all, the government of Kazakhstan will need to overcome the population’s high level of radiophobia and strong opposition to hosting the nuclear fuel bank resulting from the Soviet legacy of negative health effects and environmental contamination caused by decades of nuclear testing. The general public in Kazakhstan does not distinguish much between nuclear fuel and nuclear waste, and the authorities must be prepared to face mass protests organized by environmental and other nongovernmental organizations. To mitigate this problem, the government should initiate an elaborate and coordinated nationwide awareness campaign to educate the public and explain political, economic and technological advantages associated with the implementation of the initiative.

Another challenge is that due to the growing terrorism and extremism risks the LEU bank might become an attractive target for terrorists or saboteurs. Even if the facility is reliably guarded and equipped with advanced physical protection systems, human error or greed can lead to security breaches. Therefore, this endeavor will require a substantial commitment of Kazakhstan’s own resources, including investments not only in improved security infrastructure, but also in trained personnel. Qualified professionals knowledgeable in nonproliferation safeguards, security and safety cultures will be needed both for operating the nuclear fuel bank and preventing/responding to possible proliferation and terrorism threats.

Yukiya Amano. (2017). Introductory Statement to the Board of Governors.

Akorda. (2009). President Nursultan Nazarbayev Meets President Mahmoud Ahmadinejad of the Islamic Republic of Iran who is in Astana for an official visit.