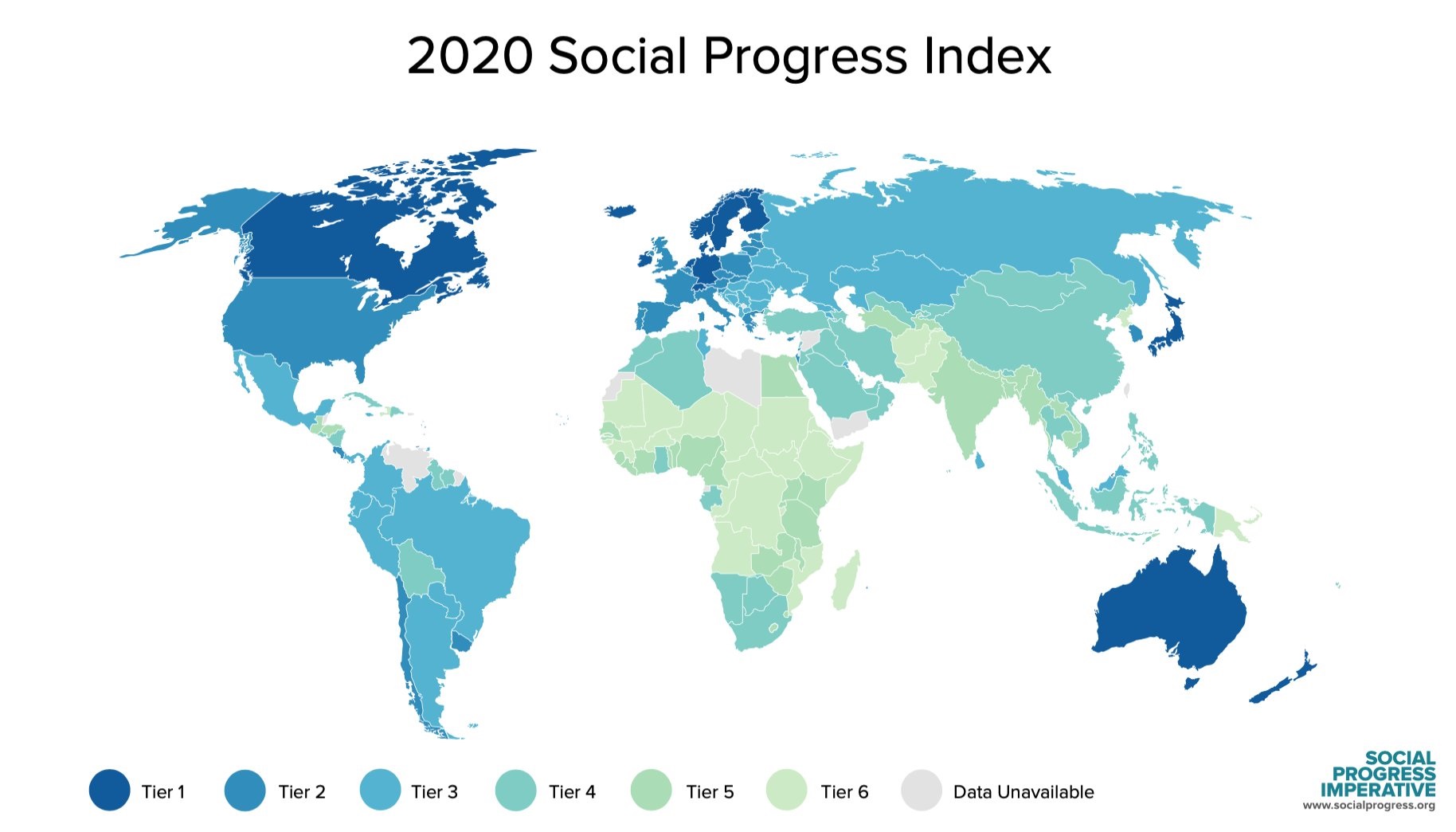 There are various ways of perceiving and measuring a country’s success. One of the most basic ones involves tying the success to the economy and mainly measuring the economic performance of a nation. However, the economy does not always tell the whole story, as even a stronger economy does not guarantee the presence of freedoms, rights, and opportunities for everyone. There is undoubtedly a correlation between better economies and better institutions, however, at the same time, there are numerous examples of countries that are relatively successful in economic terms, yet their populations may suffer from inequality and lack of opportunities. Nowadays, it is possible to talk about the consensus that a country’s success should not be measured only in terms of GDP, but it should be based on the wellbeing of citizens [The Economist, 2013]. Therefore, the Social Progressive Imperative global nonprofit organization developed the Social Progress Index. The index is declared a “comprehensive measure of the real quality of life, independent of economic indicators” [The Social Progress Imperative, n.d.]. The index was introduced in 2014, and it has gained recognition since then.

Regarding the methodology behind the index, there are three main domains that the index measures: Basic Human Needs, Foundations of Well-being, and Opportunities. They are further divided into numerous categories that are considered in detail later in the article. The authors define social progress in the following way: “Social progress is the capacity of a society to meet the basic human needs of its citizens, establish the building blocks that allow citizens and communities to enhance and sustain the quality of their lives, and create the conditions for all individuals to reach their full potential” [The Social Progress Imperative, n.d.]. Based on the information that the index collects on 163 countries, these countries are assigned into six tiers, the higher is the tier – the higher is the level of social progress.

Due to the nature of the index, it is possible to measure the world average; according to the authors of the index, “if the world were a country, it would score 64.24 (out of a possible 100), which is less than that of Ghana with its 64.86, which occupies 103rd position in the ranking, but more than Azerbaijan with 64.11, which occupies the following 104th line of the rating [The Social Progress Imperative, n.d.]. More precisely, the world would score 74.65 in Basic Human Needs, 60.82 on the Foundations of Wellbeing dimension, and 57.25 on Opportunity.

Within the Central Asian region, Kazakhstan is the only country representing the Third Tier, while Uzbekistan and Kyrgyzstan were included in the Fourth Tier, with Tajikistan and Turkmenistan being the parts of the Fifth Tier. It is difficult to identify universal factors behind such a disposition. While the economic situation of Kazakhstan clearly gives the republic an upper hand, Turkmenistan – the second most prosperous country of the region in terms of GDP per capita, is only fourth in terms of social progress. Kyrgyzstan, with its weaker economy but, until recently, more liberal policies, ranks second in the region, leaving behind Uzbekistan and Tajikistan. This proves that success in terms of social progress is clearly predicted not only by economic factors but is comprehensive and incorporates the behavior of such stakeholders as societies and governments. Nevertheless, it is also important to note that Kyrgyzstan fell in terms of the Opportunity domain of the index in 2020, which may be a part of the overall trend of the rise of populism and nationalism in the republic lately [Doolotkeldieva, 2021].

The conclusions made earlier become even more notable when the Central Asian countries are compared to the rest of the post-Soviet region. Ukraine, Belarus, Georgia, and Armenia scored higher than any of the Central Asian countries, despite having GDP per capita close to that of Turkmenistan [The World Bank, n.d.]. All four of these countries were perceived as more successful primarily due to the fact that their citizens had more opportunities, freedoms, and rights than those of Central Asian republics. Despite being richer than all of the mentioned countries, Russia found itself lower than Kazakhstan in the index, further supporting the thesis that the economy is not an all-important factor when countries are evaluated based on the quality of life of their citizens.

Regarding the strengths and weaknesses of Kazakhstan within the index, the best performance was achieved in the domain of Basic Human Needs (85.6), followed by Foundations of Wellbeing (76.13) and Opportunity (56.24) domains. Within the domain of Basic Human Needs, Kazakhstan demonstrated the best results in the spheres of Nutrition and Basic Medical Care (95.5) and Shelter (92.9), while the Personal Safety score lowered the average significantly (67.9). Within the Foundations of Wellbeing domain, the best results are connected to Access to Basic Knowledge (94.5) – a traditionally strong category in the post-Soviet countries. The situation with Access to Information is worse (77.1), and here the main negative contributor is freedom of the press. The Environmental Quality category also had a mediocre score (70.1), as Kazakhstan’s greenhouse gas emissions were dramatically above average, while biome protection measures were almost nonexistent. Finally, Health and Wellness was the lowest-scoring category in the Foundations of Wellbeing domain (62.8), mainly due to the incredibly high death rate caused by non-communicable diseases (e.g. heart diseases, cancer, etc.). This is further supported by the facts from WHO (2016), which demonstrates that around half of premature deaths in Kazakhstan are associated with heart diseases, and around 18% – with cancer. The opportunity domain of the Social Progress Index consists of four categories: Personal Rights (54.9), Personal Freedom and Choice (68.8), Inclusiveness (35.4), Access to Advanced Education (65.9). While the state of Advanced Education and Personal Freedom were relatively fine in Kazakhstan, Personal Rights and Inclusiveness were dragging the score down. The latter two issues are often associated with having limited freedoms and low tolerance within the society.

In conclusion, we can say that the importance of this kind of global indices lies not only in the fact that a participating state can determine its actual place in the international hierarchy, but more importantly, it can recognize its weak points that require increased attention and work to improve. As a rule, such global studies are characterized by objectivity, methodological accuracy, and a systematic approach. Kazakhstan, like other countries, needs to continue working on developing its support system for the public and enhance the capacities of institutions.