The Third Quarter Marks the End of Russia’s Expansionary Cycle The latest statistics by the Federal State Statistics Service of Russia (Rosstat) [1] reveals a deceleration of the real disposable income[1] (RDI) growth. In August of 2018, the RDI growth turned negative for the first time measured in month-to-month terms showing a 0.9% decrease and in September, it reached negative 1.5%. As a result, the third quarter has shown a 0.0% change in RDI after two quarters of growth despite real GDP growth of 1.3% and 1.9% during the first and second quarters of 2018 respectively. In one of the recent reports of the Ministry of Economic Development [2], the GDP growth in the Russian Federation based on preliminary estimates revealed a 1.1% real GDP growth in August and 1.8% growth in July measured in year-to-year terms. According to the report, in the third quarter of 2018 the GDP growth slowed down to 1.3% after 1.3% and 1.9% growth after in the first and second quarters of 2018 relative to the same period of 2017.

These and other data indicate that there is a deceleration of the Russian economy and there is a high risk that the next quarter would show a negative growth of RDI again since 2017 whereas the real GDP growth might turn negative starting with 2019. The current GDP growth of Russia lasts eight quarters and before that, it had been in contraction for seven consecutive quarters. Similarly, we can see that positive trends that began in within the last year do not show any signs of further development. The retail turnover presented a rather good growth in the second quarter of 2018 reaching 2.9%. On the other hand, we can see that such an important indicator of the business cycle as Industrial Production Index, which measures a periodic real change of the aggregate industrial output in the economy, slides down to 2.1% in September after an accelerating growth that lasted until July of 2018 as it is plotted in Figure 1 below: 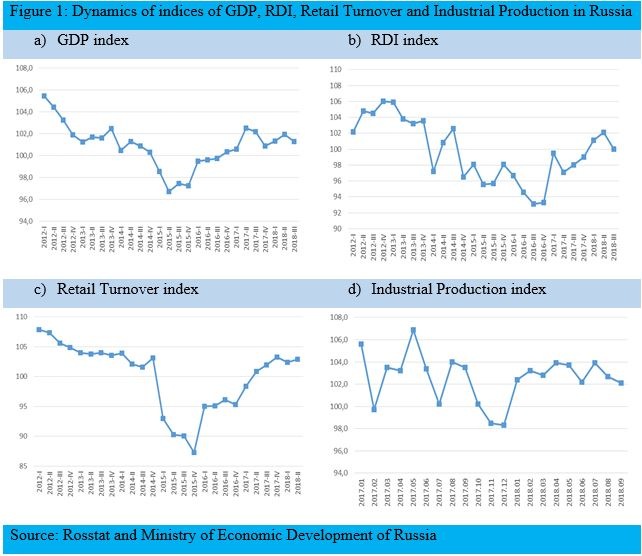 Thus, we can see that the positive trends set at the beginning of 2018 do not find further continuation. The Ministry of Economic Development of Russia explains the slowdown of the GDP growth in the third quarter of 2018 by the decline in agriculture whereas the rest of the sectors have shown average growth rates [2]. The main contribution to the GDP growth in the third quarter of 2018 was made by industrial activities (0.6 percentage points). However, we can observe a deceleration of growth of the industrial sector. Thus, in July the industrial sector has shown a 3.9% of real growth whereas in August and September it went down to 2.7% and 2.1% respectively, which resulted in 2.9% of growth in the third quarter. Here it is important to point out that the deterioration of the dynamics of the entire industrial sector is overwhelmingly due to manufacturing industries and particularly to more sophisticated industries. Thus, according to the Ministry of Economic Development of Russia, contraction in the manufacture of other vehicles and equipment industry was due mainly to a sharp decline in the production of aircraft, including spacecraft, and relevant equipment with -45.2% in September in year-to-year terms after near-zero dynamics in August [2]. At the same time, the data by the Ministry of Economic Development show that the extractive industry is increasing very rapidly with 3.2%, 4.5% and 6.9% of growth in July, August and September of 2018. This acceleration in the extractive industry is primarily due to a turn to increase oil production, which in September, according to the Ministry of Energy of Russia, updated the post-Soviet maximum (11.36 million barrels/day) [2].

Before recently, agriculture had been considered as one of the pillars of the Russian economy and successful examples of the import substitutions, which was declared as a response measure to the economic sanctions of western countries against Russia [3]. However, since starting from the second quarter of 2018 we can observe a decline in the agricultural sector as well. Thus, in 2018 the growth rate in agriculture went down from 2.3% in May to 0.9% in August and turned negative 10.8% in September. The reduction in agriculture is mainly explained by lower yields and a reduction in the acreage of a number of crops. Moreover, the contribution to the deterioration of the annual dynamics of crop production was made by the high base of August last year, when due to a shift in the harvesting schedule, catching up was observed.

It is important to note that the overall deceleration of the growth rate of the Russian economy occurs under conditions of high oil prices and record high volumes of its production. Thus, according to the report by the Ministry of Economic Development, in September, the average price of Urals crude increased to $78.1 per barrel from $71.5 a barrel in July. At the same time, by late September, oil prices exceeded $80 per barrel and reached maximum levels since November 2014. However, such an important seemingly positive factors that must drive the Russian economy upwards produces a little positive effect.

Putting everything together, it becomes clear that the economy of Russia is about to finish its expansionary cycle and to start entering in a cycle of a recession that would last for other several quarters. Such important components of the economy as household consumption, industry and investments have very reduced effects in order to maintain even a slight positive economic growth. Ironically, the overall situation is aggravated by the proper plans of the Government of Russia to handle the economic situation. The intentions to increase the tax revenue, the pension reform that is being carried out, the plan of de-dollarization and the overall tension around Russian foreign policy creates a highly negative environment for consumption as well as investments. Thus, for instance, a research revealed that at the end of the second quarter of 2018, half of the Russian population (50%) expected that the worst times for the country were ahead. Higher levels of pessimism were registered before only twice in the entire modern history of the Russian Federation: one in the first half of the 1990s and the second in the winter of 2016 [4]. The Rosstat in its latest measure of the Consumer Confidence Index[2] revealed the index decreased by 6 percentage points and amounted to (-14%) in the third quarter of 2018 compared to the second quarter of 2018 [5]. It has also been revealed that the reduction in foreign direct investment in the third quarter reached $6 billion dollars being the largest fall during the entire history of the current account balance of Russia [6]. These and other indicators can easily be interpreted as clear signs of deterioration of economic expectations among population and worsening of the investment climate.

Many official reports concerning the economic performance of Russia in the third quarter of 2018 show clear signs of a slowdown of the economic growth of Russia and the deterioration of the welfare of the households. Such key real economic sectors as industry as well as agriculture presented very sluggish and even negative growth rates. Moreover, the general economic decline is present even under such stark positive factors as high oil prices combined with record high production of crude oil. At the same time, based on latest data, we can observe a strong deterioration of the economic expectations of the population, which is caused by the current economic situation as well as the plans of the government of Russia regarding the mitigation of the upcoming economic decline. The studies revealed also that the intentions of the government of Russia also produce negative sentiments among investors and causes huge outflows of capital and investments. These and other indicators present signs of the end the expansionary part of the current business cycle and the beginning of its contractionary part that will probably start in the fourth quarter of 2018.

[2] Consumer Confidence Index is an indicator reflecting aggregate consumer expectations of the population and is based on their activities of savings and spending.