Kazakhstan is indeed a country with a rapidly growing urban population not only in terms of the overall growth but also in terms of the number of cities that experience demographic expansion. Throughout 1999-2019, only three cities had a population decline, while all other 27 cities located in different regions of the country have grown demographically. Moreover, those three cities (Ridder, Zhezkazgan and Stepnogorsk) are relatively small with less than 100,000 inhabitants. Hence, we can see that the growing urban population has been a dominant pattern in Kazakhstan since 1999 with very few exceptions. Moreover, comparing the rates of growth of the cities we can observe that most of them have grown rather fast by more than 10% and ten cities have grown by more than 50% in terms of their population. Figure 1 shows the map with 30 cities and their growth rates since 1999 along with their population size by 2019. 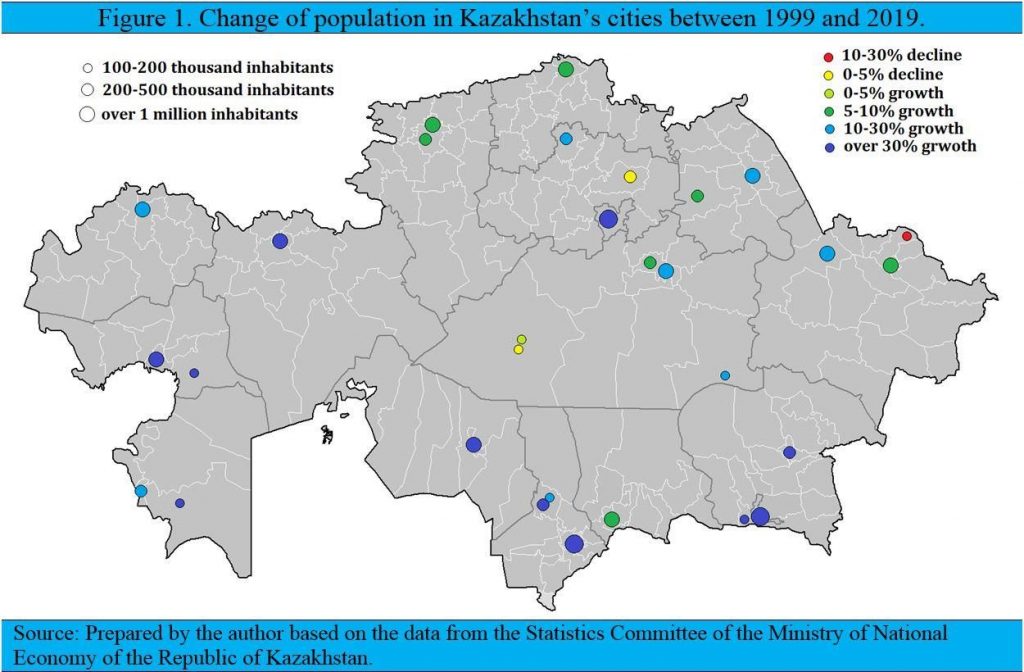 Looking at the map, we can state that the cities in different parts of Kazakhstan have grown at different rates. However, contrasting the current population size of the cities with the rate at which their population size changed, we can find that the extreme cases match. In other words, the top largest cities tend to be also the ones that have grown fastest and the smallest cities are among the cities with the lowest population growth. The rest of the cities represent fairly mixed cases in this regard. Thus, the cities of Nur-Sultan and Shymkent are among the top three largest urban areas and also the ones that have shown the most rapid growth during 1999-2019. Since 1999, Nur-Sultan has tripled its population, while Shymkent’s population almost doubled. Almaty has grown a bit slower showing a 64% growth, which is still an outstanding result.

The three major cities of Kazakhstan, Almaty, Nur-Sultan and Shymkent, represent a special case relative to the rest of the cities in many terms and contribute a lot to the overall urbanization. The combined population of these three cities is almost 4 million, which is nearly 37% of the total urban population. Over the period from 1999 to 2019, 30 cities in our sample added 3.17 million inhabitants to the country’s urban population. Out of this number, Almaty, Nur-Sultan and Shymkent account for 2.07 million. In other words, these three cities contributed twice as much to the overall urban population increment than all other cities combined. The average annual population growth of Almaty, Nur-Sultan and Shymkent has been nearly 2.5 times faster compared to the rest of the cities. Hence, the role of the three major cities in the formation of the urban population of Kazakhstan becomes more and more significant. This is in line with the trends observed in most of the developing countries where a select number of urban centers are growing at more rapid rates than others [World Bank, 2017].

One of the peculiar facts in Kazakhstan regarding the urban population is that currently there is no single city in the country with the population over 500,000 and below 1 million. This is an extremely rare case for a country that has three cities that surpassed the 1 million threshold and has many cities with 200-300,000 inhabitants. Even if we take into account the cities of Karagandy and Aktobe that are approaching the 500,000 threshold, this would be far below the general pattern of the rank-size distribution of the cities also known as the Zipf’s law [Zipf, 1949].

The current demographic trends observed in the country’s urban areas are important for performing economic analysis and making projections on infrastructural demand and public expenditure. Many economic sectors such as manufacturing, services, construction and others are almost entirely urban. A growth or contraction of particular sectors often depend directly on demographic features of local markets, and a thorough analysis of urban demographics can help significantly in shaping appropriate economic policies at regional and local levels.

Citypopulation.de (2019). The population of all Kazakh cities, urban and rural settlements with more than 20,000 inhabitants according to census results and latest official estimates. Retrieved from https://www.citypopulation.de/Kazakhstan-Cities.html. Accessed on 15.09.2019.

Statistics Committee of the Ministry of National Economy of the Republic of Kazakhstan (2019). Official statistical information. Retrieved from http://old.stat.gov.kz. Accessed on 15.10.2019.

World Bank (2017). Cities in Eastern Europe and Central Asia: A Story of Urban Growth and Decline. Retrieved from https://www.worldbank.org/en/news/feature/2017/11/30/cities-in-eastern-europe-and-central-asia. Accessed on 15.09.2019.