Uzbekistan on its Way to Shape the Caspian Strategy 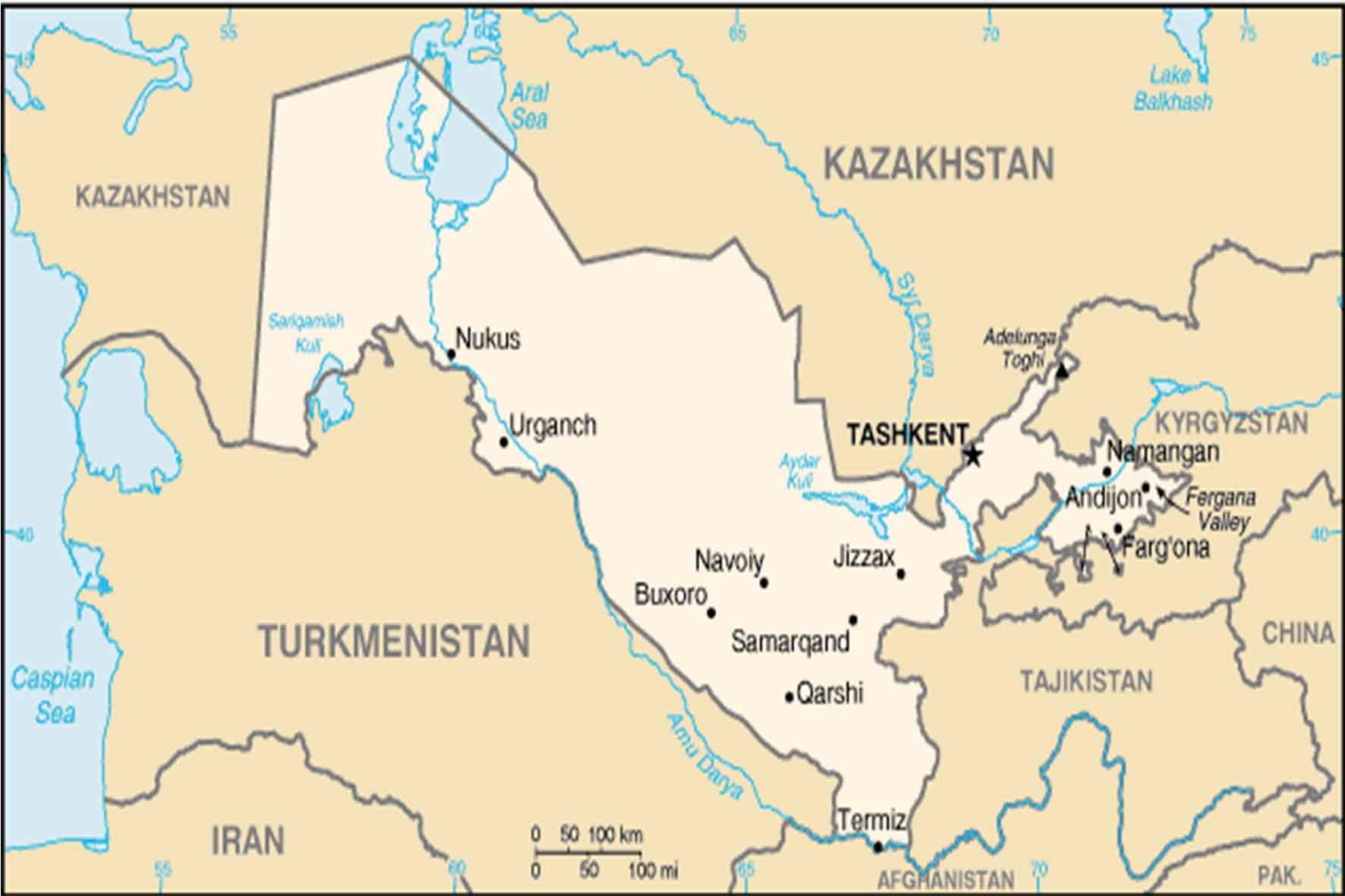 On May 19-20, 2017, the President of Uzbekistan, Shavkat Mirziyaev, took his second visit to neighboring Turkmenistan in less than three months.[1] The bilateral consultations held in Turkmenistan’s resort city of Awaza on the Caspian Sea shore resulted with signing a number of agreements including the Memorandum of Understanding (MoU) between the Uzbek state-owned energy company Uzbekneftegaz and the Turkmen state energy company Turkmennebit. The MoU proposes the establishment of a mutual and long-term cooperation on a joint exploration and the development of the oil and gas deposits in the Turkmen sector of the Caspian Sea. It was officially announced that the parties agreed to extract hydrocarbons on the terms of the production sharing agreement. (AKIpress, 2017) (Energy Information Administration, 2013) In fact, the document becomes a second MoU Uzbekistan signed with the Caspian littoral states. In May 2016, Uzbekneftegaz and Azerbaijan’s state energy company SOCAR signed a MoU on the development of cooperation[2], which envisages collaboration, exploration, and development of oil and gas fields. Furthermore, on May 18, 2017, in Tashkent Uzbekneftegaz and SOCAR signed the Memorandum on joint oil and gas operations in Azerbaijan, Uzbekistan and the third countries.

Uzbekistan’s intention to improve the energy cooperation with the Caspian coastal states corresponds with Tashkent’s plans to give a new impetus for the development of energy sector. According to the State program on the reserves increment and further expansion of oil and gas outputs for 2017-2021, it is planned that by 2021 the extraction of oil, gas and gas condensate in Uzbekistan would increase by 1.9 million tons, 53.5 billion cubic meters and 1.1 million tons, respectively. However, the Uzbek authorities face the downtrend in hydrocarbon production since the early 2000s. For instance, according to the U.S. Energy Information Administration (EIA), the oil production in the country reduced from 156,000 barrels per day (bpd) to 103,000 bpd in 2011 with the further decrease to 72,000 bpd in 2016. Moreover, the gas production, which experienced growth from 2.03 billion cubic feet (bcf) in 2003 to 2.38 bcf in 2008, has started to fluctuate since 2008 reaching 2.18 bcf in 2014. It is expected that after the implementation of 38 projects[3] in the oil and gas industry worth about $ 20.6 billion, the gas production in Uzbekistan will increase to 66 billion cubic meters per year by 2020. 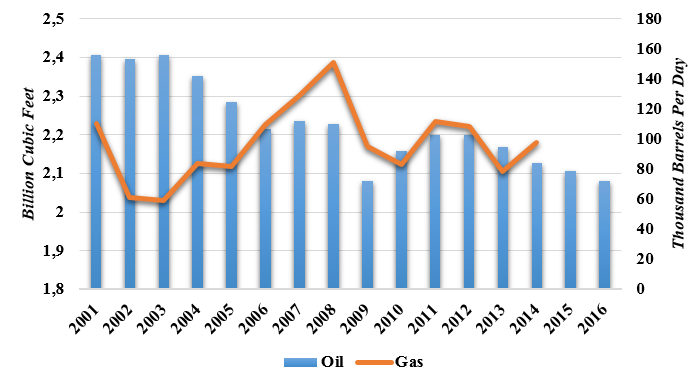 In fact, the energy industry of the country is heavily affected by the crisis even with $20 billion invested by Uzbekneftegaz in 2010-2016. As a result of the significant decrease in hydrocarbon production, imports of liquids to Uzbekistan increased by 1.3 times. Therefore, the approved program in the energy sector is aimed primarily at both the increase of the oil and gas outputs and strengthening the geological exploration. According to the approximate forecasts, at the current hydrocarbon production rate, the recoverable oil and gas reserves will cover the needs of Uzbekistan for the next 21 and 25 years, respectively. (Neftegaz, 2016) Therefore, it is understandable that since there is a lack of large mineable deposits, Uzbekneftegaz started to consider the opportunity to jointly develop oil and gas fields outside the country.

In fact, in terms of their bedding, part of Uzbekistan’s energy resources are geographically located in the Caspian Sea region. (Gelb & Twyman, 2004) For instance, according to the U.S. EIA, while not a Caspian coastal state, a considerable amount of Uzbekistan’s territory, along with its energy resources, lies in the geological Caspian basins. As it shown in Figure 2, Uzbekistan’s territories are located in two out of four Caspian Sea geological areas, namely, in middle Caspian and the North Ustyurt basins. (Energy Information Administration, 2013) 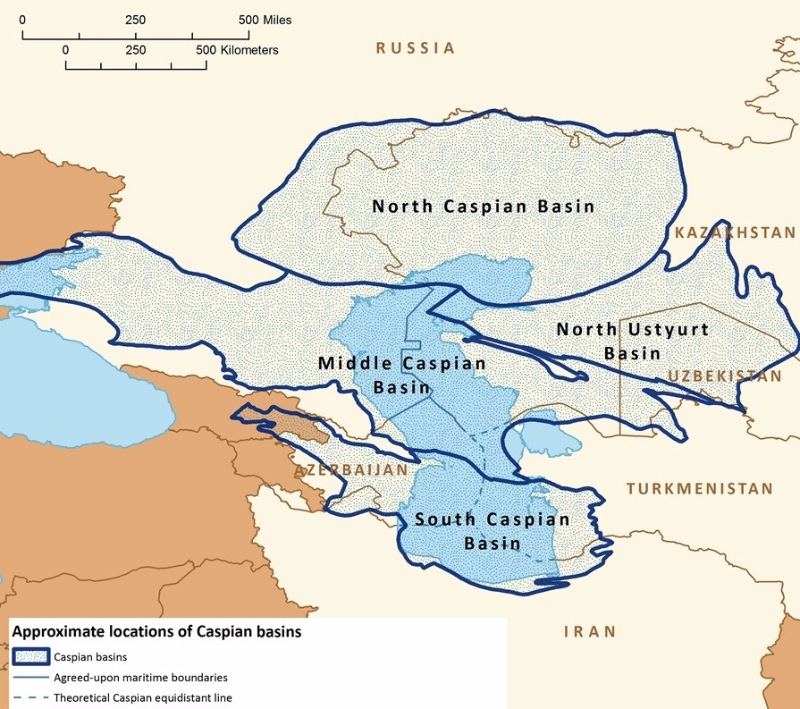 It appears that landlocked Uzbekistan is searching for an opportunity to provide access to the Caspian region mineral wealth in order to cover the need for hydrocarbons that will be used to increase the refining capacities in the country. To date, there are three refineries in Uzbekistan, namely, in Bukhara, Fergana and Altyaryk. The total capacity of the Uzbek refineries amounted to 11.1 million tons of petroleum products per year. However, due to the shortage of the raw materials caused by the significant decline in oil production, the refineries in Uzbekistan are loaded only by 60%. Since oil-processing capacity of Uzbekistan will remain at the level of 225,000-230,000 bpd up until 2024, while the volume of the refined oil products is expected to decline from 75,640 bpd to 69,050 bpd by 2024 (BMI Research, 2015), it is in the interests of Uzbekistan to provide additional quantities of crude oil for its refinery facilities in the short-term. Therefore, one of the important outcomes of Shavkat Mirziyaev’s visit to Awaza is the reached agreement on the Turkmen oil shipments to Uzbekistan. The parties reached an agreement that the Turkmen light oil from the Kiyanly field developed by the Malaysian Petronas[4], as well as from the fields developed by the Chinese CNPC would be delivered to the Bukhara refinery in Uzbekistan. (Neftegaz, 2017) In fact, Tashkent also signed a long-term agreement with Moscow on future oil supplies in the amount of 500,000 tons per year for the modern oil refinery complex in Jizzakh region, which is recently under construction.[5] It is worth mentioning that the Russian oil will be shipped via Kazakhstan’s oil pipelines system and then through the new Uzbek pipeline, which is yet to be built by 2021. (Pannier, Ancesci, & Walsamaki)

On the other hand, Uzbekistan considers the possibility of having access to the Caspian seaports in order to be involved in the large-scale international transportation projects implemented by the Caspian littoral states. For instance, since the beginning of 2017, the Uzbek side demonstrates its willingness to join the Trans-Caspian International Transport Route (TITR) expressing its interest in the transit potential of the Aktau and Kuryk seaports, which could contribute to the promotion of goods produced in Uzbekistan at the European and Mediterranean markets. (RailwayPro, 2017) In fact, on May 24, 2017, in Tashkent the national railway company Kazakhstan Temir Zholy and Aktau International Trade Port organized the round table titled “Trans-Caspian International Transport Route and Seaports of Kazakhstan”, during which the Kazakh side made a presentation about the transport potential of the Aktau and Kuryk seaports, and reported about current developments in the development of the dry-cargo and ferry fleet in the country. (KazInform, 2017) It should be mentioned that previous consultations on the issue of Uzbekistan’s joining the TITR were held between Kazakhstan Temir Zholy and Ozbekiston temir yollari (Uzbekistan Railways) during the 16th meeting of the Joint Intergovernmental Commission on bilateral cooperation in Tashkent on February 22, 2017. Since Tashkent also shows its intention to launch transit route via the Turkmen seaports on the Caspian Sea shore, it could be assumed that the transportation and delivery of goods through the Caspian ferries are also an integral part of the Uzbek agenda in the Caspian region.

In conclusion, it must be recognized that Uzbekistan, indeed, shows signs of interest to shape its own vision towards the Caspian region. However, current efforts to strengthen the economic interaction with regional states can be classified as a prerequisite for the development of a fully-fledged Caspian strategy that could address the issue of energy and transport cooperation between the coastal countries and Uzbekistan in the future. Furthermore, it appears that in the mid-term there would be little need to accelerate the process of shaping the Caspian strategy. However, this does not mean that Tashkent will refuse to launch the energy and transportation projects with Kazakhstan and Turkmenistan.

[1] Shavkat Mirziyaev visited Turkmenistan on March 6-7, 2017, for the first time and it was his first official foreign trip since taking office in December 2016.

[2] The document was signed by the Chairman of the Board of Uzbekneftegaz, Alisher Sultanov, and the President of SOCAR, Rovnag Abdullayev, in Tashkent during the 20th Anniversary International Exhibition and Conference Oil and Gas Uzbekistan.

[3] According to the Chairman of the Board of Uzbekneftegaz foreign investors such as Russia’s Lukoil, South Korea’s Kogas and EPC contractor GS E&C, China’s China National Petroleum Corp, South Africa’s Sasol and the U.S. Honeywell are working in the Uzbek energy sector under 14 projects worth about $16.3 billion.

[4] Produced gas enters the Turkmen gas transportation system via a 53 km pipeline that ties the Kiyanly facilities to the Ekerem-Garabogaz export pipeline.

[5] On April 27, 2017, the President of Uzbekistan attended the ceremony of laying the first stone of the construction of the new refinery complex in the country. It is planned that the design capacity of the complex will amount to 5 million tons of processed hydrocarbon annually.