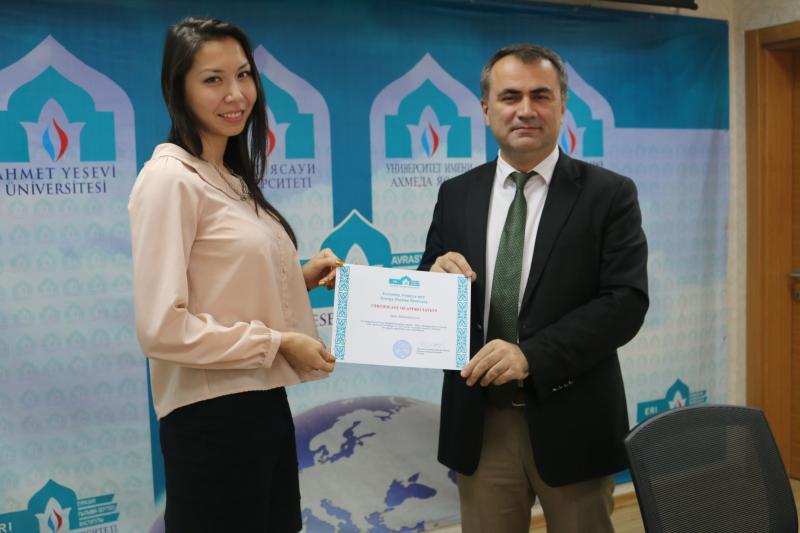 Research Fellow of the Eurasian Research Institute Saule Akhmetkaliyeva in his seminar titled “Water Management in Central Asia” gave detailed information on current situation in region, problems faced in water management and on legislation regarding water code. She pointed out that one of the biggest issue in the water management is the decentralization of the management system after the collapse of the Soviet Union, therefore each country had to create their own management systems but these individual system structure has weaken the water management in Central Asia. Moreover, the disagreements and conflicts between downstream and upstream countries on the usage of the water is also preventing the creation of a regional functioning system.

In terms of water consumption m3/capita list Central Asian countries are at the top of the list in global ranking where Turkmenistan is in first place, Uzbekistan is fourth and Kazakhstan is eleventh. The reason behind why Central Asian countries are gaining higher positions is due to outdated technological infrastructure in use left from Soviet Union times because of that large portion of the water wasted before it reaches it is destination. On the issue of the disagreements discussions are circling around the purpose of water usage, downstream countries wants to use the water for agriculture and upstream countries is trying to produce energy (Hydroelectric).
Regarding the environmental issues there is salinization of the soil which is increased from 10% to 60%, increase in the pollution amounts and shrinking water reserves problems has been pointed out as major problems in her seminar. In the process of providing solutions to these problems countries individual attempts within their capacities often insufficient, therefore they ask assistance from international organizations such as United Nations Development Programme, Asian Development Bank and World Bank to find effective solutions to current problems. At the end of the seminar in his recommendation part Akhmetkaliyeva pointed out the importance of using new technologies and techniques in order increase the effective usage and reducing the water waste ratio, establishment of decision making mechanisms and development of water management at the country level as a first step and then moving on to regional management systems.

At the end of the seminar participants are discussed various project and water management policies in Central Asia.