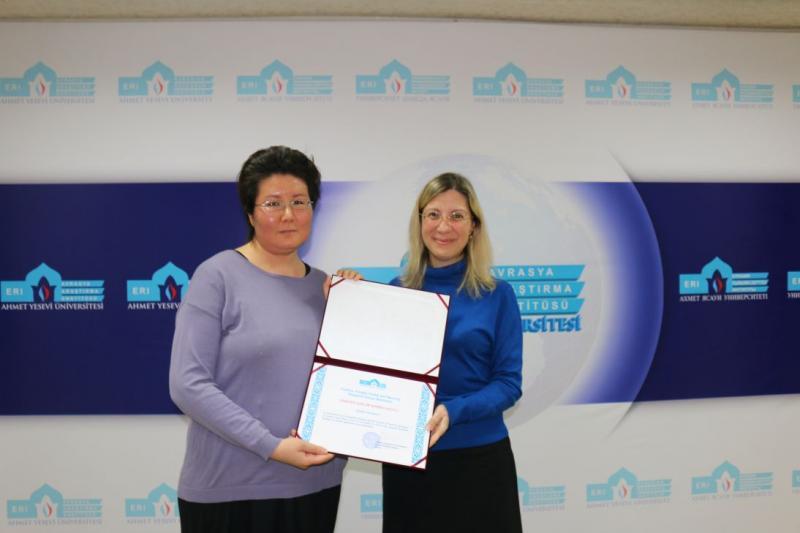 In a seminar titled “Current US Security Assistance to Central Asian States” Juldyz Baizakova gave a detailed overview of the projects and programs in the military and security fields. Referring to the reasons for the changes in the program budgets, Baizakova said that the United States aimed to maintain security and stability in Central Asia, and in this direction it provided financial support to various programs as well as support for local staff training.

She stated that the main reasons for the interest of the US in the region include cooperation in the field of security and strengthening economic relations with the countries in the region. As for security, she added that importance was given to cooperation and financial support for various issues such as combating terrorism, border security, fight against drugs, stability operations and security sector reform.

As for military aid, Baizakova pointed out that Kazakhstan received $2.4 million for military aid and $6.1 million for humanitarian and development aid from the United States in 2016 and as for assistance to Central Asian countries she underlined that most financial resources were transferred to the Cooperative Threat Reduction program. Moreover, she said that programs such as foreign military financing, international military training, support for global fight against drug trafficking and fight against terrorism were among the support programs.

In the course of the seminar, Baizakova said that despite the views in the western media that interest in Central Asia would decline after the United States had withdrawn from Afghanistan and  that senior officials of the US army did not have the same opinion, the resources transferred to the programs have decreased in the last few years. Baizakova added that while the U.S. Department of Foreign Affairs had given $33.3 million in aid to the military and police forces in 2014, it was reduced to $24.7 billion in 2016, and this figure was higher than $7.9 million in 2000 before 9/11 events.

Baizakova also stated that 46% of security assistance was devoted to stability operations and security sector reform, 32% to fight against drugs and 22% to anti-terrorism programs. Speaking of the development aid that the U.S. made to Central Asia, she said that it was $86.3 million in 2014, and $103.4 billion in 2016.