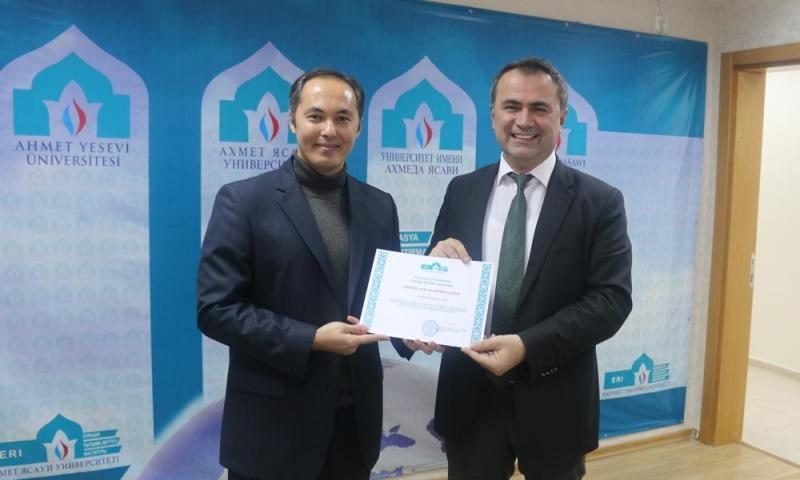 Farkhod Aminjonov (PhD) in his seminar mainly touched upon Central Asian states’ energy security policies and the projects aimed to strengthen the energy security in these countries adding to that gave a detailed information regarding the current situation of these policies. PhD Farkhod Aminjonov explained the functioning system of the resource sharing mechanism and energy related relations between countries.

Farkhod Aminjonov (PhD) stated the system operated according to barter system where Kazakhstan, Turkmenistan and Uzbekistan provided gas and light petroleum to Kyrgyzstan and Tajikistan in return received water and electricity. The system continued to function even after the collapse of the Soviet Union until 2000 when price of oil and gas has started to increase and Uzbekistan started to behave differently and did not fulfil its commitments.

In its country specific analysis, he mentioned that Uzbekistan’s primary energy policies is to increase the production in order to sell more in international market and pointed out that price difference between foreign and domestic market is 6 fold with providing this information he also draw an attention to subsidies amount for domestic market. Moreover, he stated that this policy due to equality between production and consumption figures has facing problems and in order to increase the export amount of gas government needs to shift certain amount of gas supplied to domestic market to export, which would not be welcomed by the public.

About analysis regarding the Tajikistan Farkhod Aminjonov (PhD) said that Tajikistan is totally dependent on Uzbekistan in energy transportation geographically. Adding to that the biggest energy policy challenge for Tajikistan is unable to use its hydroelectric potential at large scale (510 billion kwh) where country currently using only 3% of its potential. In the case of Kyrgyzstan major concern is that Kyrgyz government during the recent years has used its Toktugul reservoir excessively and facing difficulties in its Kambarata power plant, furthermore Kyrgyzgaz has been sold to Gazprom which will make difficult for Kyrgyzstan to acclaim its energy independence.

Regarding Kazakhstan he made number of positive analysis saying that projects such as establishment of Beineu-Bozay-Shimkent gas pipeline is increasing the strength of energy infrastructure of Kazakhstan. In addition to that having a long-term energy policy vision such as clean energy target, which aims to cover the 50% of the energy needs of the country from the alternative energy sources by 2050. Nevertheless, downside point is currently the thermal power stations one of the dirtiest source of producing energy supplies 80% of the energy needs. Turkmenistan’s production amount is 75bcm  and its export level is around 45 bcm and the problem lies with its export partners where Russia is not an reliable partner, in long-term gas export to Iran seems not sustainable adding to those Turkmenistan for a long will not retain profits from its gas export to China due to its pipeline construction agreement.

At the end of the seminar, participants discussed energy infrastructure and energy sector topics.