The Eurasian Research Institute held a roundtable titled “The Energy Security Paradox in Central Asia: Independence in an Interdependent Region” on April 8, 2016. 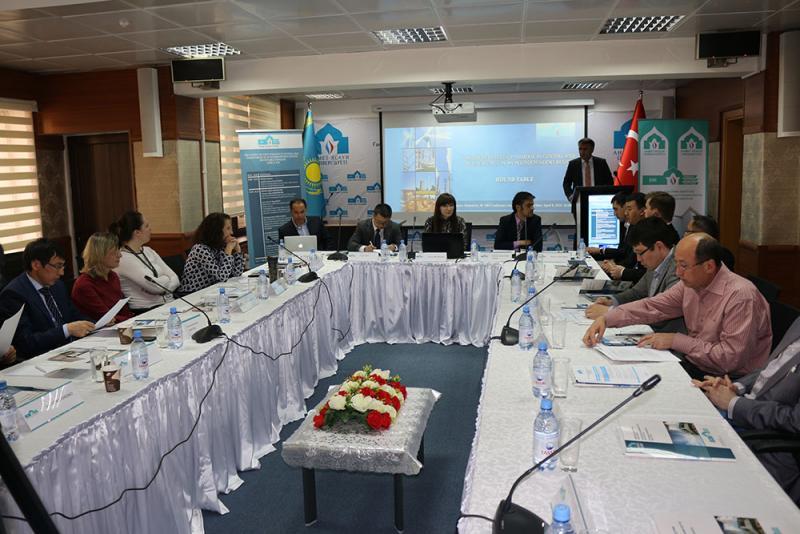 During the roundtable speakers from Kazakhstan, China, Uzbekistan and Tajikistan presented detailed information about their countries, addressing the issue of energy security from different angles. Deputy Director of the Center for Russian Studies of the East China Normal University Assoc. Prof. Dr. Yang Cheng, Head of the Department of Sectoral Development of the Center for Strategic Studies under the President of Tajikistan Mr. Rahman Jahan Afruz Daring, Senior Research Fellow at the Eurasian Research Institute Dr. Farkhod Aminjonov and Director of the Central Asian Renewable Energy Development Center and Lecturer at Westminster International University Dr. Bakhtiar Eshchanov participated in the roundtable as speakers.

Our Institute director Assoc. Prof. Dr. Nevzat Simsek gave an opening speech at the roundtable and referred the issues of energy supply and demand, the importance of regional cooperation and energy efficiency. Speaking of the energy priorities of Central Asian countries, he mentioned water resources for Tajikistan and Kazakhstan and oil and natural gas resources for Kyrgyzstan, Uzbekistan and Turkmenistan. Being rich in energy resources increases the region’s importance in the international arena. He stated that the European Union and China needed the large quantities of oil and gas import. Although the European Union takes steps to reduce gas dependence, statistics show that the need will increase further in the coming years. The Central Asian countries are trying to diversify energy transport routes through South Stream, Trans-Caspian and TAPI pipelines. Dr. Nevzat Simsek stated that after the collapse of the Soviet Union the main reasons for the need of regional cooperation were increasing energy demands and aim to profit from energy trading. However, current policy of the Central Asian countries had negative impact on the energy policies. Therefore, the countries should implement policies that take into account interdependence of countries in the region. He also emphasized the importance of increasing the energy efficiency. At the end of his speech, Dr. Nevzat Simsek added that regional cooperation would be useful both for Central Asian countries and for foreign actors.

Convenor Lidiya Parkhomchik opened the session stating that water and energy problems were important for Central Asian countries and that the region’s energy structure was interdependent. As well as she highlighted the importance of regional cooperation for energy security.

Assoc. Prof. Dr. Cheng Yang addressing the relations between the different actors, stated that while big countries tried to gain the status, small countries tried to survive with different strategies. However, noting that small countries also try to gain the status, the situation has become so much more complicated. Small, medium and large countries try to minimize this uncertainty and apply a variety of means such as containment and negotiation. He stressed the importance of geopolitical economy in understanding the relationship and energy problem. There is a combination of cooperation and competition in the region and players determine their moves depending on the situation. In this regard, Central Asian countries use multi-faceted policy in order to increase their potential. Saying that Russia would decrease its dominance in the region, he stated that countries had become more independent in energy transportation with TAPI projects and pipelines in Chinese line. At the same time due to lack of sea coast in Central Asian countries, pipeline is the main option in energy export. The fact that these lines have to go through several transit countries made the situation much more complicated. Noting that competition and cooperation go hand in hand in terms of regional cooperation, Dr. Cheng Yang defined this situation with the phrase “co-opetition” (cooperation-competition). Although China’s Silk Road project and different projects of South Korea, Japan and Turkey aim to increase their cooperation with the region, they are in competition with each other. Due to the complexity of this relationship and dynamics, any actor’s control of the energy sector in Central Asia is impossible. Concluding his speech Dr. Cheng Yang suggested that an international consortium as energy club could be installed along with the Eurasian energy index and preparation of a new Eurasian energy charter.

Mr. Rahman Jahan Afruz Daring during his speech provided detailed information about Tajikistan’s hydro-energy resources, the country’s departure from the central system, as well as several hydroelectric power plants and new projects. He stated that the total potential reserves of hydropower resources of Tajikistan was 527 billion kWh. Nurek hydroelectric power plant with a capacity of 3,015 MW is the biggest hydroelectric power plant installed in the country. Providing information on various hydropower plants in Tajikistan he highlighted the 4th biggest hydroelectric power plant in the country Santuga-2 and said that 15 years later this plant would be transferred to Tajikistan from Russia. The biggest problem for Tajikistan during the autumn and winter months is difficulties with electricity production. Referring to the lack of cooperation Mr. Rahman Jahan Afruz Daring stressed that this lack damaged the economy of countries in the region. During the Soviet period, there was central electrical system. In 2009, Tajikistan left the system and this situation has created difficulties in electricity demand, especially in winter months. Non-operation of irrigation pumps disrupted the production capacity of the agricultural sector. But despite all these problems, new projects will continue. According to Mr. Rahman Jahan Afruz Daring, CASA-1000 project is an important regional project in electric power supply and it will provide electricity to Tajikistan, Kyrgyzstan, Afghanistan and Pakistan.

Dr. Farkhod Aminjonov during his speech discussed in detail the issue of energy security. During the Soviet period there was unified energy system and after the collapse of the Union, independent energy policies of Central Asian countries have led to distrust. He talked about three energy systems such as isolated system, intra-regional energy cooperation and energy supply to foreign markets. He stated that there was no generally accepted definition of energy security. According to Dr. Farkhod Aminjonov, energy security is ownership of a sufficient amount of energy both for people and future economic needs. He said that energy security of the countries was dependent on each other and their efforts to improve their energy security on their own had damaged other countries in the region. He added that the establishment of energy supply infrastructure was considered to be rational and that Uzbekistan was at the heart of this system. Energy policy priorities for Uzbekistan, Kazakhstan and Turkmenistan include thermal energy and pipelines, while for Kyrgyzstan and Tajikistan – the presence of the hydroelectric energy. Energy insecurity in Central Asia has many aspects such as energy supply, requirements management, efficiency, economy, environment, human and military security, internal socio-cultural policy and technology. According to him, development of renewable energy sources, improving efficiency and strengthening regional cooperation should be considered as energy policy priorities to improve the energy security. When comparing intra-regional trade to cooperation, the income derived from foreign trade provides economic security but not energy security. According to Dr. Farkhod Aminjonov, annual 4 bcm of gas that will be enough to ensure energy security in regional cooperation will not bring the export in Central Asia-East Asia (80 bcm annually) or Central Asia-Russia (50 bcm annually) lines to a standstill. To achieve intra-regional cooperation, investment for infrastructure and maintenance, short-term trade agreements and creation of the platform between countries will contribute to the energy security.

Dr. Bakhtiar Eshchanov during his speech on the topic of the importance of regional cooperation in achieving the objectives of sustainable development provided detailed information on market food and water, energy, food, as well as effects of global warming on energy and agricultural sector in terms of 2030 goals for sustainable development in Central Asia. Dr. Bakhtiar Eshchanov stressed that energy policy and agricultural policy were inseparable. He noted that Central Asian countries and particularly Uzbekistan were the countries that consume the most water per capita in the world. He said that global warming negatively affected the agricultural sector in many ways. Countries in the region need to implement the agrarian reform including water saving irrigation techniques in the field of agriculture. He also underlined the importance of implementing adaptation strategies and as an example mentioned the Aral Sea. Dr. Bakhtiar Eshchanov said that the cost of renovation of old infrastructure in Uzbekistan would be around $ 40-50 billion. In addition, he stated that the differences of energy policies made the situation more complicated.

At the end of the roundtable, participants exchanged views on the subject of energy policy in their countries.