An Overview of Agricultural Development of Russia 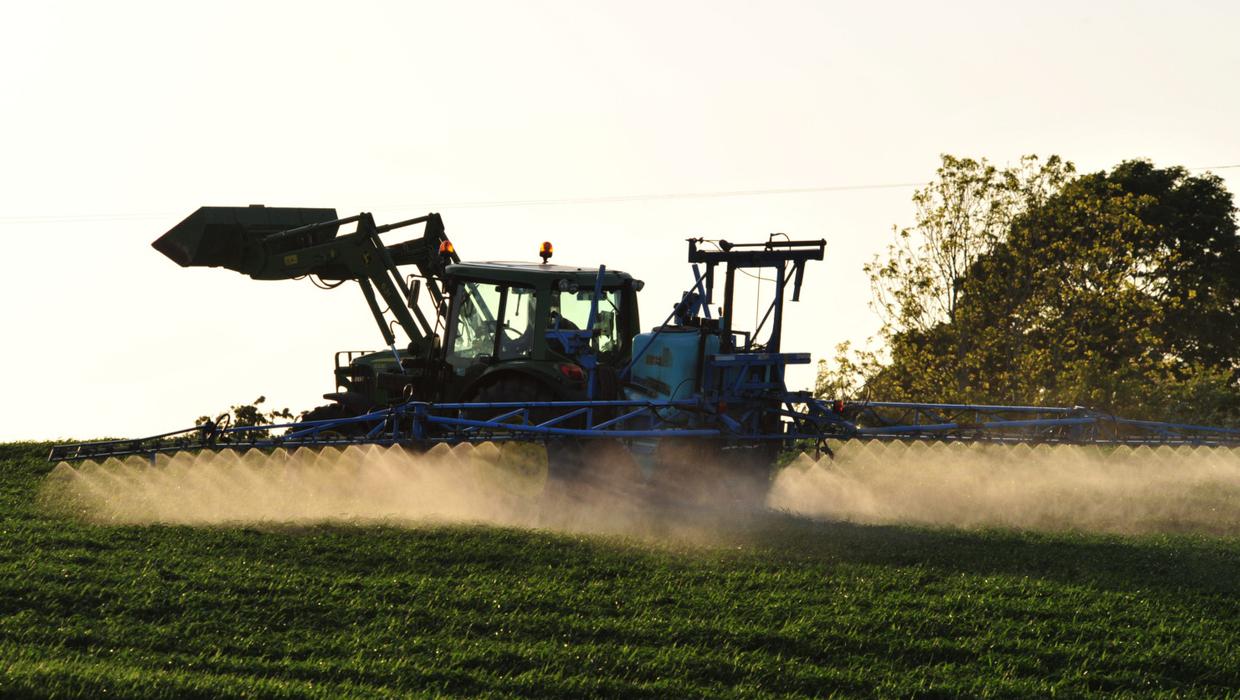 Agriculture remains one of the most important sectors in Russia’s economy and the country’s authorities perceive it as one of potential economic growth drivers. The sector experienced significant decline during the 1990s, but started to recover in the 2000s. During the last decade, the country’s agriculture demonstrated steady growth.  After the European Union and other western countries imposed sanctions on Russia due to the ‘Crimea Spring’, Russia responded by counter-sanctions and banned imports of agricultural products from those countries. Critics claim that counter sanctions are counterproductive and will result in higher prices for Russian customers, while proponents argue that they will contribute to growth and diversification of Russia’s agricultural production. Therefore, this commentary analyses agricultural development of Russia in terms of production, trade and basic sectoral trends.

Production of agricultural goods in Russia demonstrates positive dynamics. According to data from the World Bank (2020), the country’s value added agriculture (in constant 2010 prices) increased from $45.9 billion in 2000 to $66.2 billion in 2019. However, a share of the agriculture (in value added terms) in Russia’s gross domestic product decreased from 5.8% to 3.4% for the same period. Employment in agriculture also demonstrated decline and its share in total employment decreased from 14.5% to 5.5% for the reported period. At the same time, production per worker increased from $4800 to $16500, increasing the competitiveness of the sector.

Russia’s agricultural development model is mainly state-centered, but based on the state-private partnership. Large farms and agro holdings mainly represent the private sector. The government of Russia supports the sector through financial interventions, where the state-owned agricultural bank Rossel’khozbank, created in 2000, plays a key role. During 20 years of activity, the bank’s investments in the agricultural sector of Russia amounted to 9.4 trillion rubles, of which 1.3 trillion (up to $20 billion) were invested in 2019. A number of the bank’s clients reached 7 million. It should be noted that during 20 years of activity the bank supported 5200 investment projects [Lenta.Ru, 2020].

The partnership of the state and agricultural business aims to achieve ambitious goals set by Russian President Vladimir Putin. In particular, the country should be transformed into a net exporter of agricultural and food products by 2022, and increase food exports to $45 billion by 2024. In order to achieve the goals, Russia should address weaknesses of its agricultural sector, including shortage of skilled workers, problems with grain storage and transportation, and low level of production of certain commodities. Technological development of the sector remains low. At the same time, it should be noted that Russia achieved significant progress in production and exports of grain, pork and poultry [Wegren et al., 2019].

Despite negative consequences of the pandemic, the agricultural sector of Russia continued its growth. During 11 months of 2020, the sector increased by 1.5% and it is expected that the growth rate would reach 2%. During the reported period, wheat production equaled 85.9 million tonnes, while gross harvest of grain amounted to 133 million tonnes [Shokurova, 2020]. 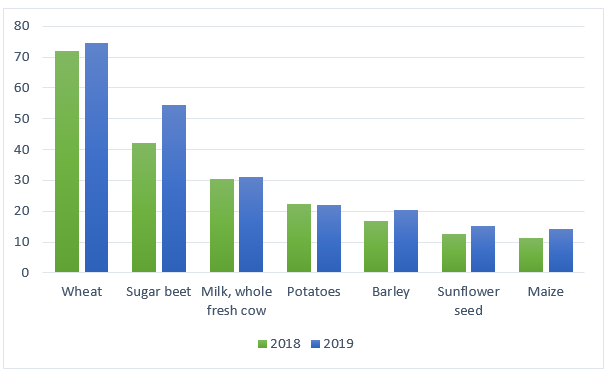 Source: The Author’s compilation based on the FAOSTAT (2020) data

These products play an important role in Russia’s trade in agricultural and food products. Wheat, which ranks first in the list of exported agricultural products, generated revenues worth $6.4 billion in 2019. Revenues from other exported products are significantly lower (Figure 2). For instance, Russia exported sunflower oil worth $2.2 billion. Its barley exports amounted to $764 million, while chicken meat exports equal $320 million. It should be noted that Russia ranks first in the world in terms of wheat exports. 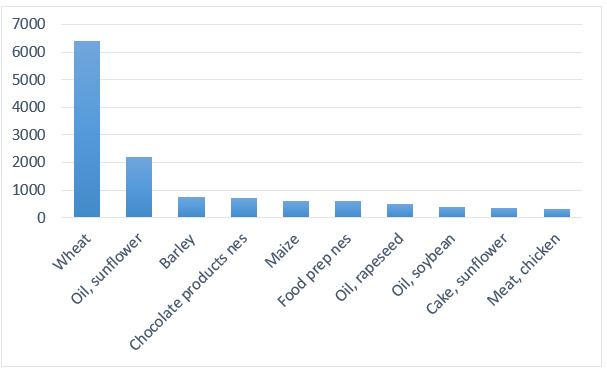 Source: The Author’s compilation based on the FAOSTAT (2020) data

Russia’s trade in agricultural and food products experienced significant changes. In 2001, the country’s exports and imports equaled $1.5 billion and $8.7 billion, respectively, which resulted in negative trade balance, amounted to $7.2 billion (Figure 3). The gap between exports and imports widened in 2005 and the negative trade balance reached $12.4 billion. In 2011, Russia’s dependence on agricultural and food imports increased substantially. The country exported products worth $11.3 billion, while its imports amounted to $39.2 billion. As a result, the negative trade balance reached a record $27.9 billion. Since 2010, Russia significantly increased agricultural and food exports. Because of Russia’s import substitution policy, food imports started to decline. As it was mentioned above, Russia’s counter sanctions on western countries, in particular members of the European Union, targeted agricultural products. As the import from these countries was banned, Russia’s internal producers obtained favorable conditions. As a result, the country’s imports of food products decreased from record $43.2 billion in 2013 to $29.8 billion in 2019. For the same period, its exports increased from $16.2 billion to $24.8 billion. In 2019, the negative trade balance amounted to $5.1 billion.

Therefore, Russia’s counter sanctions on the western countries and import-substitution policies together with steady growth of exports led to reduction of the share of imports in retail food inventories from 43% in 2013 to 23% in 2017. To continue its growth, Russia’s agriculture should return unused land to cultivation and adopt new technologies to increase the comparatively low crop and livestock yields. At the same time, the country’s agricultural policy should reconsider the role of smallholders and increase their support, which can contribute to the sector’s growth by participating in food value chains [Uzun et al., 2019]. Strong and biased support toward large farms and agro holdings constrain the development of small farms and prevent competition, which can be costly for Russian consumers. 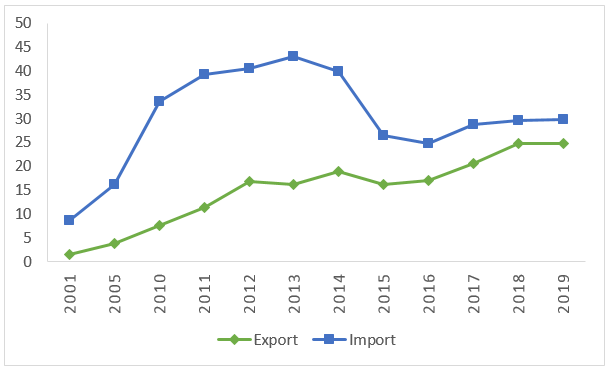 Source: The Author’s calculations based on the International Trade Centre (ITC, 2020) data

Decline of smallholders in Russia can be explained by its policy priorities. As production of smallholders remains traditional and subsistence oriented, they are not able to help Russia’s emergence as a global food superpower. Moreover, they are being left behind in the ongoing technological revolution led by agroholdings. Therefore, it is likely that their marginalization will continue [Wegren, 2018].

One of the recent developments of Russia’s agriculture is transformation of the role of the country’s Far East, where fears of China’s occupation through seasonal migrants and agricultural companies are persistent. Because of the pandemic, migrants from China were not able to come to Russia. However, despite claims that without their presence the regional agriculture will decline, local companies and workers could substitute them. Moreover, Russia’s agroholdings started to invest in the region in order to explore new Asian markets, in particular markets of China, Japan and other states of South-East Asia. It should be noted that small China’s agricultural companies started to withdraw from the Far East as they lost their competitive advantage such as migrants from China [Zuyenko, 2020].

Therefore, Russia achieved significant progress in development of its agricultural sector. Its production of grain, pork and poultry increased substantially. However, the agricultural weaknesses also persist and include issues of production, transportation and storage. Shortage of skilled workers and low technological development remain factors, which prevent growth of the sector. Trade in agricultural products changed significantly. Steady growth in exports, import substitution policy and import bans decreased negative trade balance. Therefore, Russia’s importance in the global agricultural market is increasing. At the same time, the state-centered model of development biased towards large farms and agroholdings, ignores the smallholders. However, in order to achieve ambitious goals, Russia needs to re-evaluate their importance.

FAOSTAT (2020). Commodities by country. Retrieved from http://www.fao.org/faostat/en/#rankings/commodities_by_country. Accessed on 29.12.2020.

ITC (2020). Bilateral trade between Russian Federation and World. Retrieved from http://www.intracen.org/itc/market-info-tools/trade-statistics/. Accessed on 05.04.2020.

Shokurova, Yekaterina (2020). This year, the production of agricultural products will increase by more than 2%. Retrieved from https://www.agroinvestor.ru/analytics/news/35054-v-etom-godu-proizvodstvo-produktsii-apk-uvelichitsya-bolee-chem-na-2/. Accessed on 30.12.2020.