Global Arms Trade and Implications for the Central Asian Region 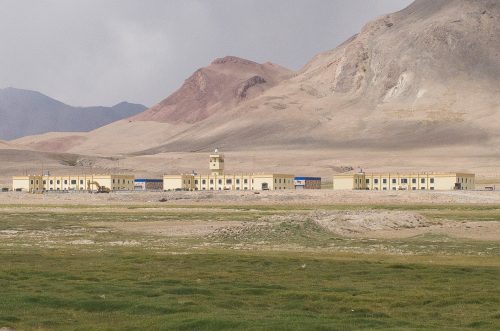 Locals say dozens, maybe hundreds of Chinese soldiers have been posted for 3 years at one of these outposts near Tajikistan's border with Afghanistan. (Photo by Gerry Shih/The Washington Post)

A few weeks ago, the Stockholm International Peace Research Institute (SIPRI), the leading international research institute on armed conflict, military expenditure and arms trade, presented its extensive annual Arms Industry Database for 2019 that elucidates the current state of affairs in the field of development and transfer of military technology and weapon systems. Despite the fact that the current report does not reflect the direct and indirect impact of the COVID-19 pandemic on arms trade, it presents the principal trends and modifications of the global arms market, its key actors and the gradual shift within the system that highlights potential breakthroughs. From our perspective, it was especially important to analyse the currents trends in the military technology and arms trade and figure out prospective implications for the Central Asian states and the adjacent region, including the Caucasus, Russia, China and Turkey.

According to the SIPRI report, the total arms sales by the 25 largest arms companies in the world reached 361 billion USD in 2019, which is an 8.5 percent increase compared to the previous year, but, unexpectedly, for the first time a Middle Eastern company appeared in the top 25, as EDGE representing the United Arab Emirates (UAE) ranked 22nd in that list with an impressive share of 1.3 percent of total arms sales [Sipri.org, 2020]. What could have been expected, however, was the steady rise of the Chinese arms sales, which is well illustrated by the presence of the four Chinese companies in the top 25 with their sales increased by 4.8 percent since 2018, as the sales of the two Russian companies in top 25 decreased significantly, with the third company dropping out of top 25 altogether after a 1.3 billion USD loss in sales [Sipri.org, 2020]. Thus, as far as the top 25 arms manufacturers in the world were concerned, the revenues of 12 US companies constituted 61 percent of total sales in 2019, with China coming second with an impressive 16 percent [DW.com, 2020].

Another SIPRI report entitled Emerging Suppliers in the Global Arms Trade compared the perspectives of the four newly emerging global arms suppliers – Brazil, South Korea, Turkey and the UAE – which, although not yet transformed into major players in the market, already delivered impressive sales performance. The UAE and Turkey became the two countries with the fastest average rank progression among global arms suppliers, as, compared to their 2000-2004 rank, they jumped 23 and 16 positions respectively by the end of 2019 [Béraud-Sudreau et al., 2020]. According to the report, Turkish defence and aviation industry sales showed one of the most impressive increases in recent years, jumping from 3.71 billion USD in 2010 to 6.69 billion USD in 2017, as the volume of arms exports by Turkey increased by 86 percent between 2010-2014 and 2015-2019.

The Turkish arms sales and export figures could expectedly be on relative rise for 2020 as well, partially due to Turkish arms sales to Azerbaijan during the armed conflict between Armenia and Azerbaijan over Nagorno-Karabakh and adjacent regions in October 2020, including prominent Bayraktar TB2 UAV (unmanned aerial vehicle), but as of the 2019 data, it was Turkmenistan, who became the largest recipient of Turkish arms exports with 23 percent share, compared to 5 percent of Azerbaijan [Béraud-Sudreau et al., 2020]. The two Turkish companies – Aselsan (#54) and Turkish Aerospace Industries (#84) – were already listed in the Top 100 Arms-producing and Military Services Companies with a collective arms sale of 2.8 billion USD [Fleurant et al., 2019].

According to the Trends in International Arms Transfers, 2019, another report by SIPRI that analyses arms transfer tendencies among the 25 largest arms exporting countries, Russian total arms exports dropped 18 percent in 2015-2019 compared to 2010-2014, including 87 percent decrease of Russian arms deliveries to the Syrian Government, which Russia actively supported since 2015 [Wezeman et al., 2020]

What might seem in these reports like a gradual decline of the Russian military technology and steady advancement of the Chinese arms sales at the global level in recent years might have a vivid reflection in Central Asian defence policies and strategic considerations, especially since the changing balance between Russian and Chinese influences is also well perceived in other sectors throughout the region. This ongoing geopolitical transition is most clearly visible in the decline of Russian economic dominance in Central Asia in favour of China, as Russian trade that in the 1990s amounted to 110 billion USD and made up 80 percent of the region’s trade dropped now to 18.6 billion USD, which is well behind that of China [Lemon & Jardine, 2020a]. Russian and Chinese interests coexisted peacefully in the region, since Russia traditionally maintained its dominance in socio-political and military spheres, while China gradually dominated regional economics, especially after the launch of the Belt and Road Initiative (BRI) and the infrastructure development projects under its umbrella [Lynch, 2020].

The equilibrium, however, seems to change in recent years with growing involvement of China in the military and security sectors in the region, as the Chinese arms imports to the region increased from mere 1.5 percent in 2010-2014 to an impressive 18 percent in 2015-2019, which culminated in the construction of its first military base in the region in 2016 overseeing Tajik-Afghan Border [Lemon & Jardine, 2020b]. As of now, China is already the main supplier of arms to Uzbekistan, and Chinese arms import to Turkmenistan far exceeds that of Russia, although China is not the leading supplier there.

One of the key aspects that boosts the Central Asian arms purchases from China became the relative lag of the Russian military technology in certain advanced segments such as combat drones (or unmanned combat aerial vehicles (UCAV)) and precision equipment, as the reputation of the prominent Russian weapon systems was somehow compromised during the recent armed conflicts in Nagorno-Karabakh, Syria and Libya, where combat drones played a decisive role. In this regard, while analysing the recent military defeat in the war with Azerbaijan, Armenian Prime Minister Nikol Pashinyan criticized the inefficiency of the new Russian electronic warfare (EW) and air defence systems purchased in 2017, which were supposed to contain and neutralize, among other things, combat drones [Sputnik Armenia, 2020]. Thus, between 2014 and 2016 several Central Asian states had purchased advanced Chinese combat drones, with Kazakhstan and Uzbekistan opting for the Wing Loong combat drone, and Turkmenistan operating the CH-3 [Lemon & Jardine, 2020b]. In 2019, Kazakhstan signed a deal with the Israeli Elbit Systems for the production of the surveillance and reconnaissance UAVs in Kazakhstan [UAS Vision, 2020]. Moreover, it was reported that Kazakhstan is considering the purchase of the Turkish Bayraktar TB2 UAV over Chinese drones following their successful employment by the Azerbaijani military, for which and an official delegation from the Kazakh Ministry of Defence was deployed to the 14th Unmanned Aircraft Systems Base Command in Batman, Turkey [Daily Sabah, 2020].

In the meantime, as the SIPRI Yearbook 2020 highlights, with 63 percent growth between 2010 and 2019, Central Asia became the subregion with the second fastest percentage growth in military expenditure after North Africa (67%), while for 2018-2019 alone Central Asia leads in the percentage changes in military expenditure by subregion list with 16 percent growth [SIPRI Yearbook, 2020].

Sipri.org (2020). Global arms industry: Sales by the top 25 companies up 8.5 per cent; big players active in Global South. Retrieved from https://www.sipri.org/media/press-release/2020/global-arms-industry-sales-top-25-companies-85-cent-big-players-active-global-south. Accessed on 05.02.2021.

Lemon, E. & Jardine, B. (2020a). How is Russia Responding to China’s Creeping Security Presence in Tajikistan? Russian Analytical Digest, 248, 6–8). Retrieved from https://css.ethz.ch/content/dam/ethz/special-interest/gess/cis/center-for-securities-studies/pdfs/RAD_248.pdf. Accessed on 08.02.2021.

Lynch, I. J. (2020). What Are the Implications of China’s Growing Security Role in Central Asia? The Diplomat. Retrieved from https://thediplomat.com/2020/06/what-are-the-implications-of-chinas-growing-security-role-in-central-asia/. Accessed on 06.02.2021.

Sputnik Armenia (2020). Air defence systems did not work during the war: Pashinyan commented. Retrieved from https://ru.armeniasputnik.am/politics/20201205/25626648/V-khode-voyny-sistemy-zakrytiya-neba-ne-srabotali-Pashinyan-predstavil-podrobnosti.html, Accessed on 09.02.2021.