A Brief Review of Migration from Poland since the EU Accession 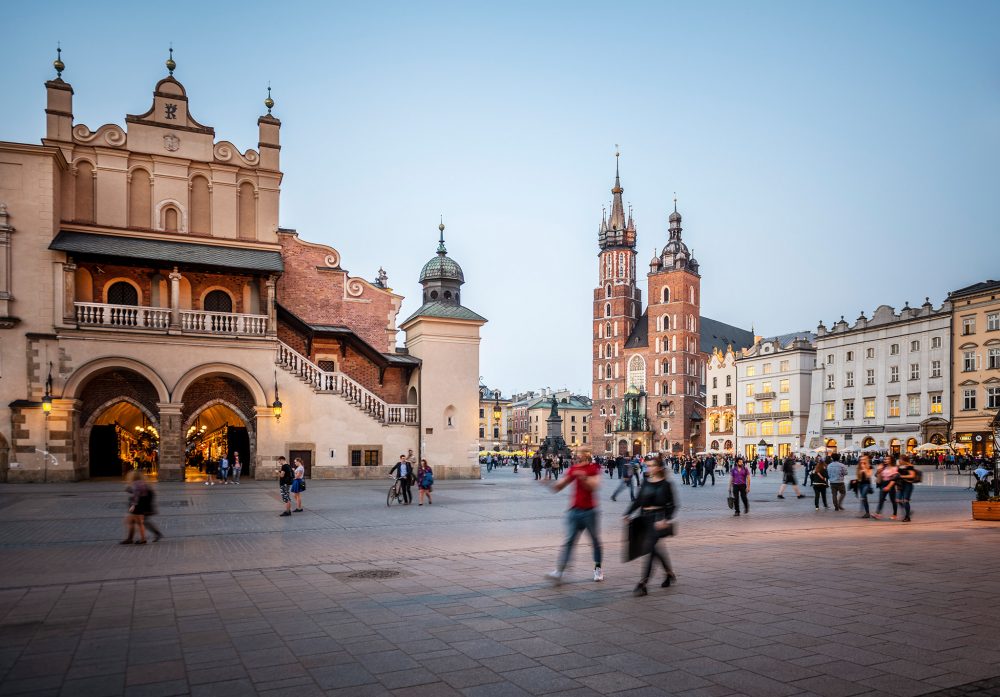 One of the most disputable issues in Europe is the migration to the European Union (EU). Most Western European countries became migrant magnet countries attracting large numbers of people by the virtue of the recruitment of workers and family reunification in the 1960-1970s. Countries that joined the EU have experienced a rise in migration in figures after the accession; this tendency was also present in the history of Poland. Em  has been steadily increasing since the end of the 1990s, specifically, after the fall of Soviet Union in 1989 [Dudek, 2011]. A dramatic change in the dynamics of migration flow for Poland was also observed after Poland became a member of the European Union on May 1, 2004 [Government of Poland, 2020]. Since the accession of Poland to the EU in 2004 and the Schengen Area in 2007, in particular, Poles acquired the right to work; thus, a significant number of people have  from Poland to other European countries in search for employment.

On this point, it is important to mention that companies that reside in EU member states could send their employers to other members on a temporary basis to deliver their services. Employees who are sent under this structure called posted workers where Polish labor migrants with their skills and experience are in demand to work abroad mainly in Germany, United Kingdom (UK), and other Western European countries. If a service provider in Poland wins a contract in another member state they could send their workers to the host country to provide their services, however, they are subject to the home country laws which is Poland. According to EU directive regulations, these posted workers are entitled to receive minimum pay at the host country level in order to avoid social dumping to prevent an advantageous situation for posted workers over the local workforce. However, comparing the salaries we see that even minimum salary lets say in Germany would be higher than the average salary in Poland, therefore, this situation allows skilled  Polish posted workers an advantage in countries like Germany, UK and other member states [Europa.eu, 2020].

The Labor Force Survey (LFS), which has documented the migration of Polish citizens from Poland to abroad since 1994, is the most reliable source that gathers information to analyze the labor market of Poland. The Labor Force Survey states that almost   adults were staying abroad between the years of 1994 and 2005 and this trend continued even further after the accession of Poland into the European Union [Fihel et al., 2007]. According to Statistics of Poland (2019), in 2004, 18.900 Poles migrated from Poland and this figure increased by 17% in 2005, the number of migrants was higher than in the first year of accession in 2004. In 2006, the number of international migrants from Poland more than doubled with 49.900 Poles reaching a peak and has since declined to 17.400 Poles in 2010. As of 2013, approximately 32.000 Polish emigrants settled down in the countries of the European Union. The data shown in Figure 1 reveal the high growth of Polish emigrants since the country’s accession, the largest groups of whom can be found in Western European countries.

Figure 1. Number of labor migrants from Poland, in thousands 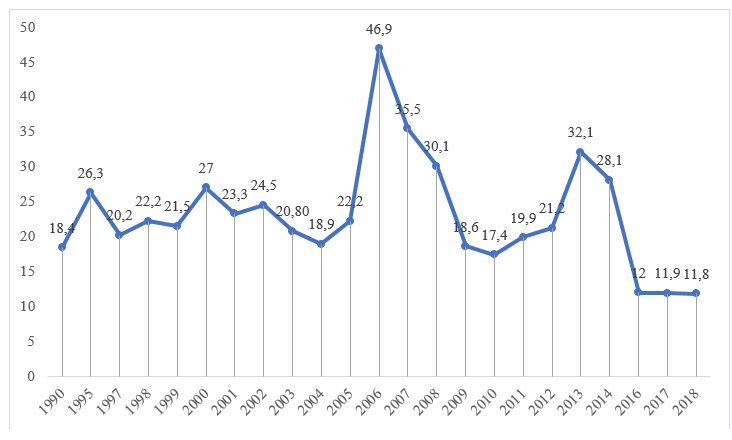 For instance, the Polish and German governments signed the 1990 Bilateral Agreement on labor migration under which Poles are allowed to work legally in Germany only in the selected sectors of the Gother European countries. It can be seen that the UK has registered the largest increase in migration in the comparison between the years of 2004 and 2005 – 585%. The interesting feature of international emigration from Poland is the increase in the number of Poles to the United Kingdom, Ireland, and the Netherlands, which decided to give the right to work for migrants from Poland after its accession in 2004. In 2006, 17.996 Polish citizens entered the United Kingdom, 2.307 – Ireland, 303 – Netherlands.

Since 2004 European countries such as Germany and the United Kingdom have seemed to notify an unusual upward trend of migrants from Poland and became the main receiving countries for migration streams of Poles. The positive effect of the posted worker situation might play a role here as indicated in Figure 2, the main directions of Polish migrants are Germany, the United Kingdom, Ireland, and the Netherlands. Germany remains the major receiving country of Polish migrants. In the years of 2004-2005 and 2007-2018 among all European countries Germany took the lead as a destination country for Polish migrants. The data collected by the LFS revealed that among other individual and economic reasons there is an upward trend after 2006 which followed by sharp fall between 2008-2012 which could be associated with the effects of global financial crisis. During 2012-2016 we saw a similar rising trend in the number of labor migrants, however a significant fall after 2016. This situation could be linked to the fact that there has been a change in the posted worker directive in 2016 making it more costly to hire posted workers which reduced the advantage of Polish companies and migrant workers which they enjoyed during 2006-2016.

Figure 2. Main directions of emigration for permanent residence from Poland by countries in years 2004-2018 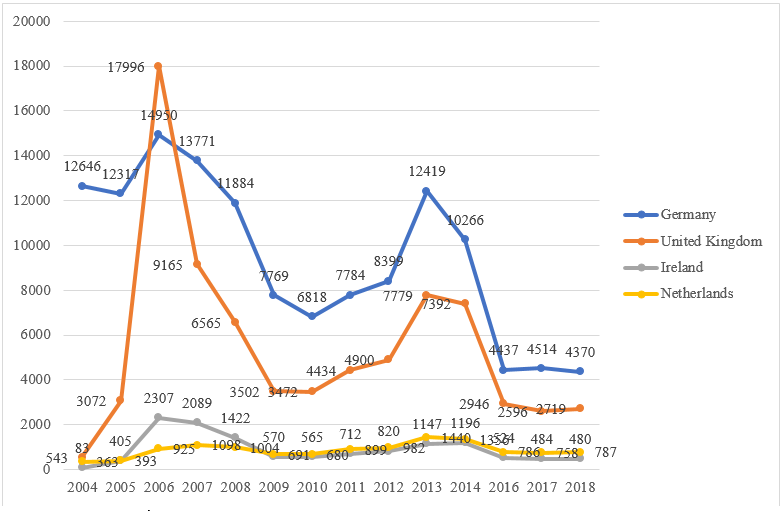 The analysis of international migration from Poland allows us to indicate two important features. The first one is the predominance of labor migration. According to Fihel et al. (2007), the Labor Force Survey proved that 80% of migrants work during their stay abroad. The main reasons of international mobility of Polish citizens is a search for work abroad or employment in another EU member state. The second crucial feature is the outflow of highly skilled specialists. Although the migration of highly skilled persons is a natural element of the economic and human resources process, the phenomenon of brain drain is not in favor of Poland. Poland faces the significant demographic trends of migration of medical professionals. The surveys conducted by the Polish Chamber of Physicians and the Polish Chamber of Nurses and Midwives revealed that almost 40% of physicians and nurses consider the emigration in the future [Krajewski-Siuda & Romaniuk, 2007]. Moreover, Polish doctors have been looking for job employment in Germany and the UK, in particular. Due to the migration of medical personnel, Poland has seen a shortage in the demand of 4.113 unfilled positions for medical physicians and 3.229 unfilled positions for nurses [Sagan & Sobczak, 2014]. In 2017, Poland had the highest number of most educated and migrated workers in the European Union meaning that the level of migration of highly skilled emigrants grows [Remix, 2017].

In conclusion we can say that there has been a change in the scale of international emigration from Poland since the accession into the European Union. The most dramatic change has been observed in migration to Germany, the United Kingdom, Ireland, and the Netherlands where one of the main reasons for this trend could be associated with the advantage of Polish labor migrants working as posted workers. The migration of top specialists could be a critical issue for Poland, which has already experienced a shortage of highly-qualified workers. Even the figures for international emigration from Poland are not as high as they were right after the country’s accession into the EU, Poland is still facing the mass flows of Poles from country to other EU member states.

Fihel, Agnieszka, Kaczmarczyk, Pawel, Mackiewicz-Lyziak, Joanna, and Okolski, Marek (2007). Labor Mobility within the EU in the Context of Enlargement and the Functioning of the Transitional Arrangements. Country Report: Poland. Retrieved from https://www.wiiw.ac.at/labour-mobility-country-report-poland-dlp-658.pdf. Accessed on 20.10.2020.

Sagan, Anna and Sobczak, Alicija (2014). Implementation of the 2011 Therapeutic Activity Act: Will Commercialization Improve the Financial Performance of Polish Hospitals? Retrieved from https://www.researchgate.net/publication/266561768_Implementation_of_the_2011_Therapeutic_Activity_Act_Will_commercialization_improve_the_financial_performance_of_Polish_hospitals. Accessed on 20.10.2020.

Statistics Poland (2019). Main Directions of Emigration and Immigration in the years 1966-2018 (Migration for Permanent Residence). Retrieved from https://stat.gov.pl/en/topics/population/internationa-migration/main-directions-of-emigration-and-immigration-in-the-years-1966-2018-migration-for-permanent-residence,2,2.html. Accessed on 20.10.2020.